The constitutive equation for conduction, we have see, is Fourier's Law. It says that the heat flux vector is a linear function of the temperature gradient, that is :

What we mean by the notation is the following:

Then for each of the components of q, we have the relation:

The conductivity is a material property that is a very strong function of the state of the material. The range of values goes from less than 0.01 Watts/m-°K for gaseous CO2 to over 600 Watts/m-°K for Ag metal. The change may be as much as 5 orders of magnitude 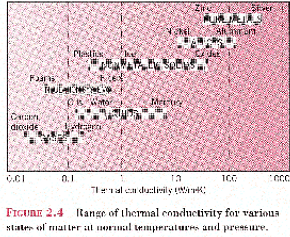 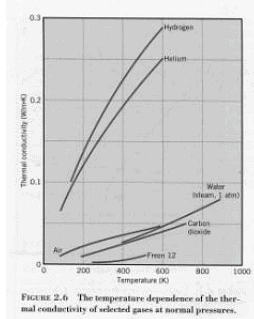 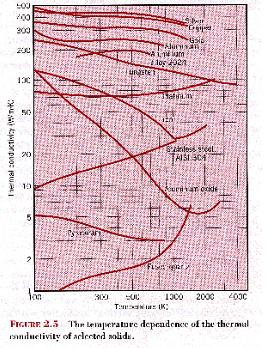 Conductive Loss through a Window Pane

Examine the simple one-dimensional conduction problem as heat flow through a windowpane. The window glass thickness, L, is 1/8 in. If this is the only window in a room 9x12x8 or 864 ft3 , the area of the window is 2 ft x 3 ft or 6 ft2 . 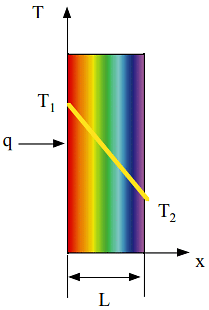 The energy at steady state yielded

The room is well heated and the temperature is uniform, so the heat low through the windowpane is

Energy balance on the Room

How long does it take for the room temperature to change from 60 °F to 45 °F?

To make this estimate, we need to solve an energy balance on the room. A simple analysis yields

At the outset, T1 = T10 = 60 °F The solution of the differential equation representing the energy balance is 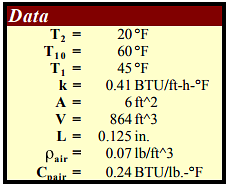 To solve for the time required to get to 46 °F, we need all the data in the table.

Heat Conduction in a Composite Solid

Examine the simple one-dimensional conduction problem as heat flow through a thermally insulated windowpane. Each layer of window glass thickness, L, is 1/16 in. The insulation layer of air between the two panes is also 1/16 in. Recall that qx is the heat flux and that k is the thermal conductivity 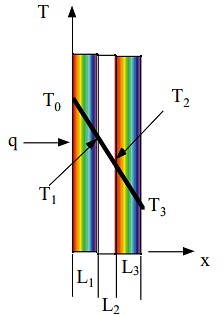 The energy at steady state yielded

The heat flow through the glass is given by

Then we can rewrite the equations in this form

If we add the three equations, we obtain

We can consider the thickness/conductivity as a resistance so that

The heat flow is then of the following form :

Again consider a windowpane, but now there is a heat transfer limitation at one boundary described by a boundary condition. qx = – h (Tr – Ti) 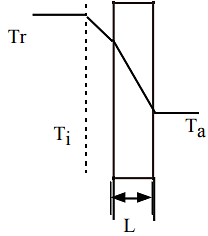 Conduction through the glass is described by

Solving for the temperatures we get

Solving for qx , the relation becomes

In the case of heat transfer in a cylinder, there is radial symmetry do that heat conduction is important only in the radial direction. 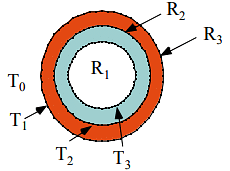 The total heat flow through any circular surface is constant

Rearranging we obtain a relation for the temperature gradient

which upon separation of variables is

This can be expressed as

Optimal Insulation on a Pipe

Is there an optimal thickness for the exterior insulation? In the context of the problem just formulated, is there a best value for R3?

To find an extremum,

It offers a critical radius for R3 = k2 /h beyond which the heat loss increases.