After reading this lesson, the reader will be able to:

The Crotti-Engesser theorem states that the first partial derivative of the complementary strain energy (U*) expressed in terms of applied forces Fj is equal to the corresponding displacement.

For the case of indeterminate structures this may be stated as, 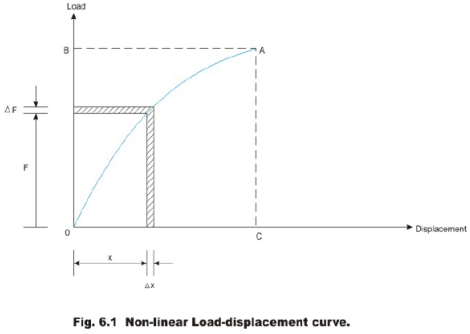 This is the statement of Castigliano’s second theorem. Now the complementary energy is equal to the area enclosed by OABO.

This gives deflection in the direction of load. When the load displacement relationship is linear, the above equation coincides with the Castigliano’s first theorem given in equation (3.8).

In case of a plane or a space truss, the only internal forces present are axial as the external loads are applied at joints. Hence, equation (5.7) may be written as,

is the actual internal deformation of the frame due to real forces. In the above equation L, , E A respectively represent length of the member, cross-sectional area of a member and modulus of elasticity of a member. In the unit load method,  δFj = 1 and all other components of virtual forces

are zero. Also, if the cross sectional area A of truss remains constant throughout, then integration may be replaced by summation and hence equation (6.7) may be written as,

where m is the number of members, (δPv) is the internal virtual axial force in member  i due to unit virtual load at j and

where, Δi is the true change in length of member i due to real loads.

Due to change in the environmental temperature, the truss members either expand or shrink. This in turn produces joint deflections in the truss. This may be calculated by equation (6.9). In this case, the change in length of member Δi is calculated from the relation,

where α is the co-efficient of thermal expansion member, Li is the length of member and T is the temperature change.

Sometimes, there will be errors in fabricating truss members. In some cases, the truss members are fabricated slightly longer or shorter in order to provide camber to the truss. Usually camber is provided in bridge truss so that its bottom chord is curved upward by an equal to its downward deflection of the chord when subjected to dead. In such instances, also, the truss joint deflection is calculated by equation (6.9). Here,

where, ei is the fabrication error in the length of the member. ei is taken as positive when the member lengths are fabricated slightly more than the actual length otherwise it is taken as negative.

1. First, calculate the real forces in the member of the truss either by method of joints or by method of sections due to the externally applied forces. From this determine the actual deformation (Δi) in each member from the equation

Assume tensile forces as positive and compressive forces as negative.

2. Now, consider the virtual load system such that only a unit load is considered at the joint either in the horizontal or in the vertical direction, where the deflection is sought. Calculate virtual forces (δPv)ij  in each member due to the applied unit load at the j-th joint.

4. If deflection of a joint needs to be calculated due to temperature change, then determine the actual deformation (Δi) in each member from the equation Δi = αTLi .

The application of equation (6.8) is shown with the help of few problems.

Example 6.1 Find horizontal and vertical deflection of joint C of truss ABCD loaded as shown in Fig. 6.2a. Assume that, all members have the same axial rigidity. 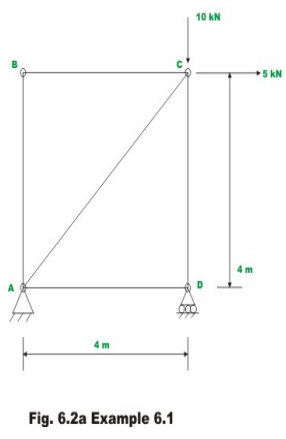 The given truss is statically determinate one. The reactions are as shown in Fig 6.2b along with member forces which are determined by equations of static equilibrium. To evaluate horizontal deflection at ‘C’, apply a unit load as shown in Fig 6.2c and evaluate the virtual forces δPv in each member. The magnitudes of internal forces are also shown in the respective figures. The tensile forces are shown as +ve and compressive forces are shown as –ve. At each end of the bar, arrows have been drawn indicating the direction in which the force in the member acts on the joint. Horizontal deflection at joint C is calculated with the help of unit load method. This may be stated as,

In this case, a unit vertical load is applied at joint C of the truss as shown in Fig. 6.2d.