Soil StructureFor a given compactive effort, soils have a flocculated structure on the dry side (i.e. soil particles are oriented randomly), whereas they have a dispersed structure on the wet side (i.e. particles are more oriented in a parallel arrangement perpendicular to the direction of applied stress). This is due to the well-developed adsorbed water layer (water film) surrounding each particle on the wet side.

SwellingDue to a higher water deficiency and partially developed water films in the dry side, when given access to water, the soil will soak in much more water and then swell more.

Construction Pore Water PressureThe compaction of man-made deposits proceeds layer by layer, and pore water pressures are induced in the previous layers. Soils compacted wet of optimum will have higher pore water pressures compared to soils compacted dry of optimum, which have initially negative pore water pressure. Permeability The randomly oriented soil in the dry side exhibits the same permeability in all directions, whereas the dispersed soil in the wet side is more permeable along particle orientation than across particle orientation. 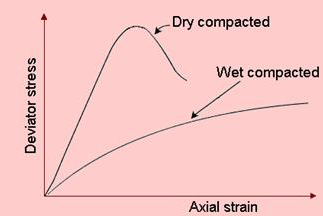 The stress-strain curve of the dry compacted soil rises to a peak and drops down when the flocculated structure collapses. At high applied stresses, the initially flocculated and the initially dispersed soil samples will have similar structures, and they exhibit similar compressibility and strength.

To control soil properties in the field during earthwork construction, it is usual to specify the degree of compaction (also known as the relative compaction). This specification is usually that a certain percentage of the maximum dry density, as found from a laboratory test (Light or Heavy Compaction), must be achieved. For example, it could be specified that field dry densities must be greater than 95% of the maximum dry density (MDD) as determined from a laboratory test. Target values for the range of water content near the optimum moisture content (OMC) to be adopted at the site can then be decided, as shown in the figure. 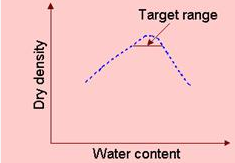 For this reason, it is important to have a good control over moisture content during compaction of soil layers in the field. It is then up to the field contractor to select the thickness of each soil lift (layer of soil added) and the type of field equipment in order to achieve the specified amount of compaction. The standard of field compaction is usually controlled through either end-product specifications or method specifications.

he field water content working range is usually within ± 2% of the laboratory optimum moisture content. It is necessary to control the moisture content so that it is near the chosen value. From the borrow pit, if the soil is dry, water is sprinkled and mixed thoroughly before compacting. If the soil is too wet, it is excavated in advance and dried.

In the field, compaction is done in successive horizontal layers. After each layer has been compacted, the water content and the in-situ density are determined at several random locations. These are then compared with the laboratory OMC and MDD using either of these two methods: the sand replacement method, or the core cutter method.

Method SpecificationsA procedure for the site is specified giving:

They are useful for large projects. This requires a prior knowledge of working with the borrow soils to be used.

Field Compaction Equipment There is a wide range of compaction equipment. The compaction achieved will depend on the thickness of lift (or layer), the type of roller, the no. of passes of the roller, and the intensity of pressure on the soil. The selection of equipment depends on the soil type as indicated.