1. This paper is divided into two parts A and B.2. All the questions are compulsory.3. Separate instructions are given with each section and question, wherever necessary. Read these instructions very carefully and follow them.4. Do not exceed the prescribed word limit while answering the questions. 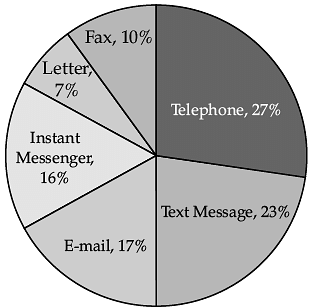 Q.6. Attempt any ONE of the following:

(a) You are Rameshwaram/Rameshwari, Secretary, Literary Club of A.B.C. School, Vikaspuri. Your schoolmate, Gautam Adhikari, a budding writer, has won the first prize in the State Story Writing Competition. The club has decided to organize a function to felicitate him on his laudable achievement. Write a notice in about 50 words, inviting all the students and giving further details.    (3 Mark)Ans.

OR(b) You have retired from a bank after 30 years of service and are looking for a job. Draft an advertisement in about 50 words for the situation wanted column of a local daily giving your qualifications, experience and the kind of job expected. You are Sunil/Sita, 4, Bank Enclave, Delhi.    (3 Mark)Ans.

(a) Your friend, P.V. Sathish, has invited you to attend the wedding of his sister, Jaya. You find that you have an important paper of pre-board examination on the day of the wedding. Thus you cannot attend the event. Write a formal reply in about 50 words to the invitation expressing your regret. You are Punit / Punita Vij, M-114, Fort Road, Chennai.    (3 Mark)Ans.

OR(b) Namita/Namit has come out successful in the XII class examination. She/he has decided to organise a party for her/his friends. Draft an informal invitation in about 50 words giving details of venue, time and date.    (3 Mark)Ans.36B, Phase-II,Preet Vihar,Lucknow.28 May, 20xx,Dear Swati,You will be pleased to know that I have cleared my class XII examination with 96% marks and have been declared a city topper. To celebrate the occasion, please join me for a small get together on June, 20xx at my residence at 7 p.m. Hope you will surely come and be a part of my celebration.Your loving friend,NamitaQ.8. Attempt any ONE of the following

(a) National Book Trust organised one week long book fair at Anna Grounds, Chennai. You visited the fair and bought a few books. You were pleased with the arrangements, enthusiasm of the visitors and the fact that books have not yet lost their relevance in the world of the Internet. Write a letter in 120–150 words to the Editor of a local newspaper to express your feelings. You are Lalit/ Latha, 112, Mount Road, Chennai.    (5 Mark)Ans.120, Kirti NagarNew Delhi17 April, 20xxHR Manager,HABC BankLajpat Nagar,New DelhiSub: Application for the post of Sales ExecutiveDear Sir,With reference to your advertisement published in 'The Times of India', dated 15 April 20xx, I would like to submit my resume for the post of 'Sales Executive'. I am an MBA from SNDT University. I did my B.Com. (Hons.) from University of Delhi. I have a total experience of 3 years in the relevant field. If given a chance, I'll try to do everything in my capability to contribute in the company's growth.I have attached my resume for your kind consideration.Hope to get a positive reply from your side!Thank you.Yours truly,AvaniOR(b) You see a classified advertisement in the newspaper inviting applications for the post of a Sales Executive in a reputed bank. Write a letter with bio-data in about 120–150 words to the HR Manager, HABC Bank, Lajpat Nagar New, applying for the post advertised. You are Avani/Aviral of 120, Kirti Nagar, Delhi.    [Comptt. Delhi Set I, 2015]    (5 Mark) 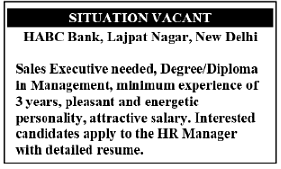 Q.9. Attempt any ONE of the following:

(a) Every teenager has a dream to achieve something in life. What they are going to become tomorrow depends on what our youth dream today. Write an article in 150-120 words on ‘’What I want to be in life”. You are Simranjit/ Smita.    (5 Mark)Ans.WHAT I WANT TO BE IN LIFEBy SmitaEver person has some aims and ambitions of his life. Some get success to achieve these goals and some fail. Mahatma Gandhi sacrificed his life for the sake of India. Everybody is born to serve some purpose. Everyone should be aware of his ambition in life. Desires may be many, but an ambition is a different thing.I also have an ambition. When I will grow up. I want to become a teacher in order to create the future of my country. People have goals of becoming doctors, engineers, actors, lawyers. But who helps them in achieving their goal? It is the teacher who guides them in realizing their dream. I have many teachers in my life whom I am proud of.The primary job of a teacher is to craft the mind of his/her pupil in a way to bring out the best of his/her qualities as a human being. Then he/she lays the stone of the student's future. A teacher makes a big difference in a student's life and so. it is very important to get a good teacher. A teacher's job is not too simple make the student know about the facts of the world but also to enrich him/her with morality, truth and good principles.A teacher's job is the toughest and important as he/she not only grooms an individual but grooms the future of a nation. It is a thought of great pride and honor to be a teacher. But with pride comes great responsibility. If a teacher wants to create a bright future, he/she should be a good individual without any flaw. I will try to make myself be able to fulfill this big responsibility with the help of the teachers I have got in my life.OR(b) An NGO, ‘Health for All’ organised a health check-up camp in a slum at Amritsar. You are Ruchika/ Raunak, and you visited the camp. Write a report in 150–200 words covering arrangements such as registration, checkup, tests carried out, etc.You may use the given cues along with your own ideas.    (5 Mark)— what— purpose— when— where— arrangements— registration, check-up, tests, reports— follow ups and treatment— people's satisfaction— feedback given by visitors