Analyzing motion of systems of particles

In this chapter, we shall discuss

The focus of this chapter is on setting up and solving equations of motion – we will not discuss in detail the behavior of the various examples that are solved.

3.1 Equations of motion for a particle

3.1 Equations of motion for a particle We start with some basic definitions and physical laws

3.1.1 Definition of a particle

A `Particle’ is a point mass at some position in space. It can move about, but has no characteristic orientation or rotational inertia. It is characterized by its mass. Examples of applications where you might choose to idealize part of a system as a particle include:

1. Calculating the orbit of a satellite – for this application, you don’t need to know the orientation of the satellite, and you know that the satellite is very small compared with the dimensions of its orbit.

2. A molecular dynamic simulation, where you wish to calculate the motion of individual atoms in a material. Most of the mass of an atom is usually concentrated in a very small region (the nucleus) in comparison to inter-atomic spacing. It has negligible rotational inertia. This approach is also sometimes used to model entire molecules, but rotational inertia can be important in this case.

Obviously, if you choose to idealize an object as a particle, you will only be able to calculate its position. Its orientation or rotation cannot be computed.

In most practical applications we are interested in the position or the velocity (or speed) of the particle as a function of time. But Newton’s laws will only tell us its acceleration. We therefore need equations that relate the position, velocity and acceleration. Position vector: In most of the problems we solve in this course, we will specify the position of a particle using the Cartesian components of its position vector with respect to a convenient origin. This means

2. We choose a convenient point to use as origin

3. The position vector (relative to the origin) is then specified by the three distances (x,y,z) shown in the figure.

In dynamics problems, all three components can be functions of time.

Velocity vector: By definition, the velocity is the derivative of the position vector with respect to time (following the usual machinery of calculus)

Velocity is a vector, and can therefore be expressed in terms of its Cartesian components

You can visualize a velocity vector as follows

When both position and velocity vectors are expressed in terms Cartesian components, it is simple to calculate the velocity from the position vector. For this case, the basis vectors {i,j,k} are constant (independent of time) and so

This is really three equations – one for each velocity component, i.e.

The acceleration is a vector, with Cartesian representation a = axi + ayj + azk .

The relations between Cartesian components of position, velocity and acceleration are

It is important for you to be comfortable with calculating velocity and acceleration from the position vector of a particle. You will need to do this in nearly every problem we solve. In this section we provide a few examples. Each example gives a set of formulas that will be useful in practical applications.

The position, velocity acceleration vectors are then

HEALTH WARNING: These results can only be used if the acceleration is constant. In many problems acceleration is a function of time, or position – in this case these formulas cannot be used. People who have taken high school physics classes have used these formulas to solve so many problems that they automatically apply them to everything – this works for high school problems but not always in real life!

Example 2: Simple Harmonic Motion: The vibration of a very simple springmass system is an example of simple harmonic motion.

In simple harmonic motion (i) the particle moves along a straight line; and (ii) the position, velocity and acceleration are all trigonometric functions of time.

For example, the position vector of the mass might be given by

Harmonic vibrations are also often characterized by the frequency of vibration:

The motion is plotted in the figure on the right

The velocity and acceleration can be calculated by differentiating the position, as follows 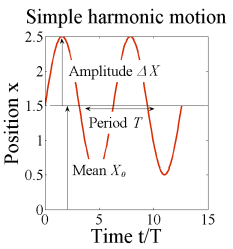 For this example the position vector is

The velocity can be calculated by differentiating the position vector.

Here, we have used the chain rule of differentiation, and noted that dθ / dt = ω .

The acceleration vector follows as

(i) The magnitude of the velocity is V = Rω, and its direction is (obviously!) tangent to the path (to see this, visualize (using trig) the direction of the unit vector t = (-sinθi+cosθj)

(ii) The magnitude of the acceleration is Rω2 and its direction is towards the center of the circle. To see this, visualize (using trig) the direction of the unit vector n = (-cosθi + sinθj)

We can write these mathematically as

We next look at more general circular motion, where the particle still moves around a circular path, but does not move at constant speed. The angle θ is now a general function of time. We can write down some useful scalar relations:

We can now calculate vector velocities and accelerations

The velocity can be calculated by differentiating the position vector.

The acceleration vector follows as

It is often more convenient to re-write these in terms of the unit vectors n and t normal and tangent to the circular path, noting that

These are the famous circular motion formulas that you might have seen in physics class.

If you find that your calculus is a bit rusty you can use MAPLE to do the tedious work for you. You already know how to differentiate and integrate in MAPLE – the only thing you may not know is how to tell MAPLE that a variable is a function of time. Here’s how this works. To differentiate the vector 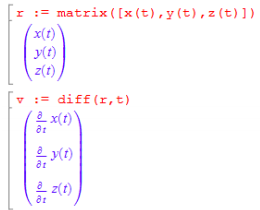 It is essential to type in the (t) after x,y,and z – if you don’t do this, Mupad assumes that these variables are constants, and takes their derivative to be zero. You must enter (t) after _any_ variable that changes with time.

Here’s how you would do the circular motion calculation if you only know that the angle θ is some arbitrary function of time, but don’t know what the function is

As you’ve already seen in EN3, Matlab can make very long and complicated calculations fairly painless. It is a godsend to engineers, who generally find that every real-world problem they need to solve is long and complicated. But of course it’s important to know what the program is doing – so keep taking those math classes…