Variations in the country’s irrigation demands

It may be appreciated that in India there is a large variation of rainfall, which is the primary source of irrigation in most parts of the country. In fact, the crops grown in various regions have been adapted according to the local rainfall availability. Water resources engineers are therefore concerned with arranging supplementary water to support the crops for seasonal variations of rainfall in order to ensure an assured crop harvest.

Further, due to variation in the type of soil over different regions of the country, the types of crop grown also varies- thus dictating the water requirement at different regions during different times. Hence, the country has been broadly classified into eight agro climatic zones, a list of which is given.

Planning of an irrigation project requires estimation of water demand of a cultivated area. Naturally, this would depend upon the type of crop grown. Since irrigation water may have to be supplied to one field growing a combination of crops or to many fields growing different crops, it is important to understand certain cropping practices which would be helpful in estimating the irrigation demand. Some of the prevalent practices are as follows:

For raising a field crop effectively, it is essential to supply water through artificial irrigation supplementing the rain falling over the plot of land and raising the soil moisture. Irrigation requirement for a typical crop and an assumed rainfall pattern may be illustrated as in Figure 5. 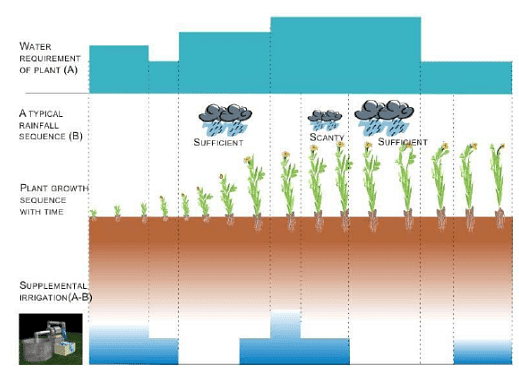 FIGURE 5 . Typical irrigation requirement of a crop and water provided naturally by rain or artificially by pumping

The total water need for various plants, known as delta, has been discussed earlier. However, in planning the supply of irrigation water to a field crop, it is essential to estimate the water requirement of each plot of land growing a crop or crops at any point of time. This may be done by studying the dynamic interaction between a crop and the prevalent climate and the consequent water requirement. The demand would, naturally be also dependant on the type of crop and its stage of growth.

Plant roots extract water from the soil. Most of this water doesn’t remain in the plant, but escapes to the atmosphere as vapour through the plants leaves and stems, a process which is called transpiration and occurs mostly during daytime. The water on the soil surface as well as the water attaching to the leaves and stem of a plant during a rainfall also is lost to the atmosphere by evaporation. Hence, the water need of a crop consists of transpiration plus evaporation, together called evapotranspiration.

The effect of the major climatic factors on crop water needs may be summarized as follows:

The variation of evapotranspiration upon these factors is illustrated in Figure 6.

Other methods have been devised to calculate ETO for given values of climatic parameters. These are discussed in the next section. In this section, we proceed on to discuss, how to find crop water need, if ETO is known.

Agricultural scientists have evaluated a factor called crop factor and denoted it by KC, to evaluate specific crop water needs. Naturally, Kc would be different for different crops and would not be the same throughout the growth season of one type of crop. Thus, the crop evapotranspiration, denoted by ETC is to be evaluated as under:

Both ETO and ETC should be in the same units and generally, mm/day is used as a standard all over the world.

In order to simply the calculations, the factor KC has been evaluated for 4 stages of a crop growth usually denoted as

The FAO Training Manual 3 gives the growth stage periods and the corresponding KC values for some typical crops. In the table below, that for rice is presented.

It may be mentioned that any crop doesn’t have a fixed total growth period, which is the summation of growth stage periods given above. There is usually a range, depending upon the variety of the crop and the condition in which it is cultivated.

For full details, the FAO training manual 3 may be consulted as KC values for other crops are evaluated in different manners. For some of the crops, the following table provides information:

Of the many methods available, the commonly used ones are two:

i. Experimental methods, using the experimentation data from evaporation pan.

Estimation of ET0 can be made using the formula

The factor Kpan varies with the position of the equipment (say, whether placed in a fallow area or a cropped area), humidity and wind speed. Generally, the details are supplied by the manufacturers of the pan. For the US Class A evaporation pan, which is also used in India, Kpan varies between 0.35 and 0.85, with an average value of 0.7.

KC has been discussed in the previous section. If instead, Kcrop x Kpan is taken as a single factor, say K, then ETC may directly be found from Epan as under:

The water management division of the Department of Agriculture, Government of India has published a list of factors for common crops and depending upon the stage of growth, which have to be multiplied with the evaporation values of the USWB Class A evaporation pan.

The important methods that have been proposed over the years take into account, various climatic parameters. Of these, only the following would be discussed, as they are the most commonly used.

This formula gives an estimate of the mean monthly values of ETO, which is stated as

Where p is the mean daily percentage of annual day time hours and has been estimated according to latitude; Tmean is the mean monthly temperature in degrees Centigrade and may be taken as ½ x (Tmax + Tmin) for a particular month. Thus using the Equation (1), one may evaluate ETC for each month of the growing season, from which the total water need for the full growing season of the crop may be found out

This method suggests that the value of ETO may be evaluated by the following formula:

Where the variables have the following meanings: