Ethernet(802.3) The Ethernet is developed in the mid-1970 by researches at the Xerox Palo Alto Research Center (PARC); the Ethernet is a working example of the more general carrier sense, multiple accesses with collision detect (CSMA/CD) local area network technology.

The “carrier sense” in CSMA/CD means that all the nodes can distinguish between an idle and a busy link, and “collision detect” means that all the nodes listens as it transmits and can therefore detect when a frame it is transmitting has interfered (collided) with a frame transmitted by another node.Physical Properties:An Ethernet segment is implemented on a coaxial cable of up to 500m. this cable is similar to the type used for cable TV, except that it typically has an impedance of 50 ohms instead of cable TV‟s 75 ohms. Hosts connect to an Ethernet segment by tapping into it; taps must be at least 2.5 m apart.

A transceiver a small device directly attached to the tap detects when the line is idle and drives the signal when the host is transmitting. It also receives incoming signals. The transceiver is, in turn, connected to an Ethernet adaptor, which is plugged into the host. 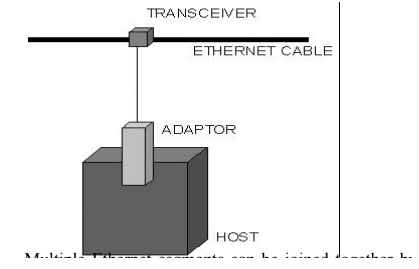 Multiple Ethernet segments can be joined together by repeater. A repeater is a device that forwards digital signals, much like an amplifier forwards analog signals. However, no more than four repeaters may be positioned between any pair of hosts, meaning that an Ethernet has a total reach of only 2,500m.

An Ethernet is limited to supporting a maximum of 1,024 hosts. Terminators attached to the end of each segment absorb the signal and keep it from bouncing back and interfering with trailing signals.Standards:There are various standards of Ethernet are,10Base5: The first of the physical standards defined in the IEEE 802.3 model is called 10Base5.It is also known as thick net or thick Ethernet. A segment of the original 10Base5 cable can be up to 500m long.10Base2:The second implementation defined by the IEEE892 series is called 10Base2.It also known as thin-net, cheapnet, cheapernet, thinwire Ethernet or thin Ethernet. In this “10” means the network operates at 10 Mbps, “Base” refers to the fact that the cable is used in a base band system and the “2” means that a given segment can be no longer than 200m10BaseT:The most popular standard defined in the IEEE 802.3 series is 10BaseT. It is also known as twisted pair Ethernet. The “T” stands for twisted pair. A 10BaseT segment is usually limited to less than 100m in length.