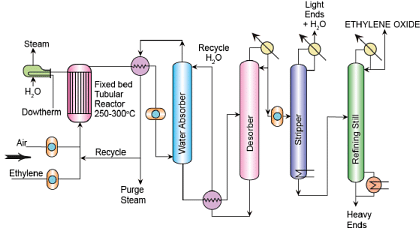 Ans: Dowtherm is an organic liquid that can attain to temperatures upto 300 oC. These are special fluids used instead of steam/water.  In this example, the operating temperature is about 250  - 300 oC and therefore usage of Dowtherm fluid is perfect.

2. In what way compression is beneficial to the absorption?

Ans: It is a known fact that absorption is most favoured at low temperature and high pressure. Therefore, compression of the cooled product gases will be very beneficial to maximize the dissolution of ethylene oxide in the water.  Of course, along with ethylene oxide other light ends and heavy ends also dissolve in water and we have no control over that.

3. Why again another compressor is used before the stripper?

4. Why ethylene and air are separately compressed?

Ans: This is due to the danger of generating an explosive mixture during compression step of the mixture.

5. What process modifications are possible for the flowsheet?

6. Discuss the energy integration capacity of the process?

Ans: In this process, the heat integration drastically reduced process steam requirements. Steam is only required in the strippers and fractionators.  This steam can be generated using waste heat recovery units using dowtherm fluid as the hot fluid to generate the steam.  Thus in this process, it is observed that for 1 ton of ethylene oxide produced, only 0.1 ton of steam is required.  This is all possible due to significant heat integration in the process. 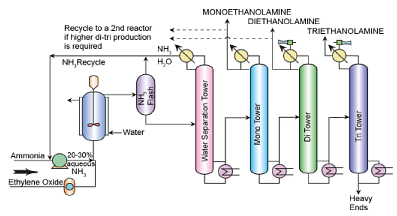 1. In what way operating the CSTR In liquid phase is beneficial?

Ans: Liquids have higher mass transfer coefficients than solids.  Therefore, if the reaction needs be facilitated with two components, if they are in liquid phases, then reactions could be faster. Therefore, pressure can play an important role in both altering the selectivity as well as conversion of the series reactions scheme.

2. Why ammonia + water needs to be separated from the second tower i.e., water separation tower?

Ans: Ammonia dissolves instantaneously in water to form ammonia solution.  This chemical affinity of ammonia is very difficult to get it through.  On the other hand, despite using flash unit, some ammonia will remain the water consisting of ethanolamines and heavy ends. Therefore, the second water separation tower is required to remove once again ammonia + water from the solution.

3. Why vacuum is used in the second and third distillation towers?

4. What process modifications you can suggest for better operation?

Ans: When higher quantitites of di or triethanolamine is desired, then the monoethanolamine can be sent to another reactor in which ethylene oxide is added.  It’s not advisable to recycle it the CSTR shown in the process flow sheet as it can form amino-ethers but not diethanolamine.

5. Can solvents (extraction) be used instead of vacuum distillation for the separation of di and triethanolamines?

Ans: No, this is due to the reason that solvents tend to have similar solubility factors for both di and triethanolamines.