Evaporation is the vaporization of a liquid. Chemical process industries, in general, use evaporator for the vaporization of a solvent from a solution. We have already discussed the heat transfer for boiling liquids in early chapter. However the evaporation is so important operation in chemical process industry that it is considered an individual operation. In this chapter we will focus on the evaporation with an objective to concentrate a solution consisting of a non-volatile solute and a volatile solvent. If we continue the evaporation process, the residual mater will be solid, which is known as drying. However, our aim is not to dry but to concentrate the solution, moreover, we will also not deal with the crystallization, in which the evaporation leads to formation of crystal in the solution. It is suggested that reader should learn the difference between evaporator, drying and crystallization.

9.1.2 Foaming Many of the materials like organic substance may foam during vaporization. If the foam is stable, it may come out along the vapor known as entrainment. Heat transfer coefficient changes abruptly for such systems.

9.1.3 Degradation due to high temperatureThe products of many chemical, food, pharmaceutical industries etc. are very temperature sensitive and they may get damaged during evaporation. Thus special case or technique is required for concentrating such solution.

9.1.4 Scaling Many solution have tendency to deposit the scale on the heating surface, which may increase the heat transfer resistance. These scales produce extra thermal resistance of significant value. Therefore, scaling in the equipment should not be ignored thus de-scaling becomes an important and routine matter.

9.2 Evaporator Equipment, in which evaporation is performed, is known as evaporator. The evaporators used in chemical process industries are heated by steam and have tubular surface. The solution is circulated in the tube and the tubes are heated by steam. In general the steam is the saturated steam and thus it condenses on the outer tube surface in order to heat the tube. The circulation of the solution in the tube have reasonable velocity in order to increase the heat transfer coefficient and remove of scales on the inner surface of the tube. The steam heated tubular evaporators may be classified as natural and forced circulation evaporators.

9.2.1 Natural circulation evaporator In this category the main evaporators are,

9.2.3 Falling film evaporator Highly heat sensitive materials are processed in falling film evaporators. They are generally once-through evaporator, in which the liquid enters at the top, flows downstream inside the heater tubes as a film and leaves from the bottom. The tubes are heated by condensing steam over the tube. As the liquid flows down, the water evaporates and the liquid gets concentrated. To have a film inside of the tube, the tube diameter is kept high whereas the height low to keep the residence time low for the flowing liquid. Therefore, these evaporators, with non-circulation and short resistance time, handle heat sensitive material, which are very difficult to process by other method. The main problem in falling film evaporator is the distribution of the liquid uniformly as a thin film inside the tube.

Now we can see if we want the further concentrate, the solution has to be sent into another similar evaporator which will have the fresh steam to provide the necessary heat.

It may be noted that in this process the fresh steam is required for the second evaporator and at the same time the vapor is not utilized. Therefore it can be said the single effect evaporator does not utilized the steam efficiently. The economy of the single effect evaporator is thus less than one. Moreover, the other reason for low economy is that in many of the cases the feed temperature remains below the boiling temperature of the solution. Therefore, a part of the heat is utilized to raise the feed temperature to its boiling point. 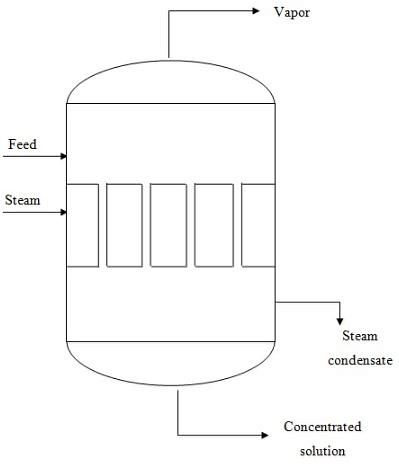 In order to increase the economy we may consider the arrangement of the two evaporators as shown in the fig. 9.2. 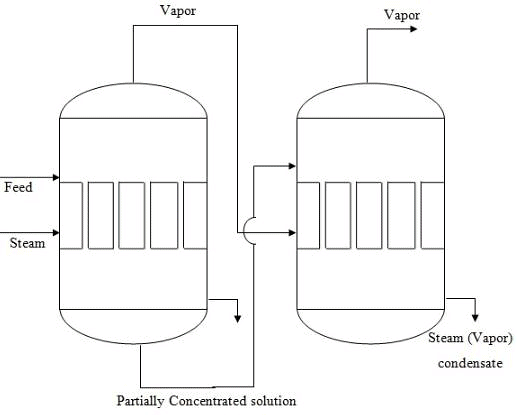 The benefit of the use of multiple effect evaporators is that in this arrangement multiple reuse of heat supplied to the first effect is possible and results in improved steam economy. 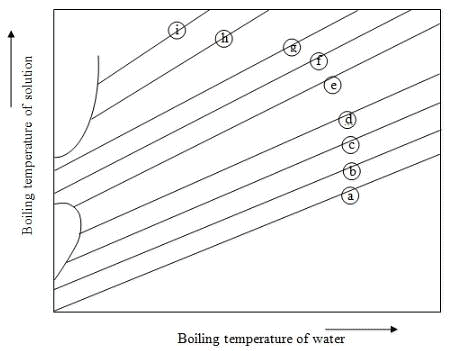 The fig.9.3 helps to find out the boiling point of solution at moderate pressure. For example if a solution having ‘x’ mole fractions of solute have a pressure over it such that water boils at T° C, by reading up from the x-axis at T °C to the line for the x mole fraction solution and then moving horizontally to the y-axis, the boiling point of the solution can be found at that pressure.