– Different animals and plants show dissimilarities in their structure but in some characters they show similarities.

These similarities provide one of the most concluding evidence of organic evolution similarities are of two types.

1. Homology – The similarity based on common origin, similar basic plan of organization and embryonic development is called homology.

Similarity in appearance and function is not necessary.

The organs which have common origin, embryonic development and same basic structure but perform different functions are called Homologous organ. Homologous term given by Richard Owen. 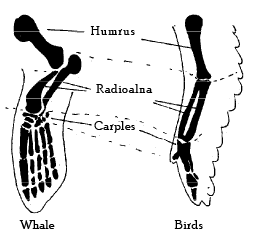 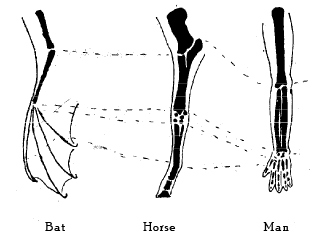 (ii) Legs of invertebrates – Cockroach Honey bee Walking Collecting of pollens But in both segmented legs are present and segments are same like coxa, Trochanter, Femur, tibia, 1-5 jointed tarsus.

(iii) Mouth parts of insects Cockroach Honey Bee Mosquito Biting and chewing  Chewing and lapping  Piercing and sucking In each of these insects the mouth parts comprise labrum, mandibles and maxillae.

(v) Thorn of bougainvillea and tendril of cucurbita(Modification of axillary bud).

(vi) Wings of sparrow and pectoral fins of fish.

(x) Homology is also seen amongst the molecule. This is called molecular homology. For example the proteins found in the blood of man and apes are similar.

(xi) Testes in male and Ovaries in female develop from same embryonic tissue.

(xii) Pectoral fin of fish and flipper of seal.

For Example : Adaptive radiation gave rise to a varity of marsupials in Australia. 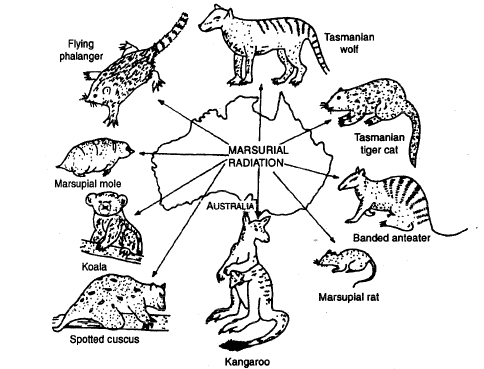 2. Analogy – It is similarity in organs based on similar function. Organs which have different origin and dissimilar fundamental structure but have similar functions are called Analogous organs.

(i) Wings of bat & birds are analogous to wings of insects.

(iii) Sting of bee and scorpion.

(iv) Phylloclade of Ruscus and leaf

(vi) Hands of man and trunk of elephant.

(viii) Eyes of Octopus and eyes of mammals (different in their retinal position). 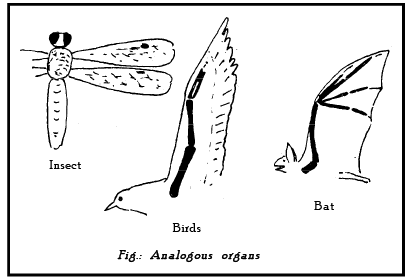 Convergent evolution (adaptive convergence/parallel evolution) Development of similar adaptive functional structures in unrelated groups of organisms is called convergent evolution. For Example : Some of the marsupials of Australia resemble equivalent placental mammals that live in similar habitats of other continents.

When adaptive convergence is found in closely related species, it is calledparallel evolution. 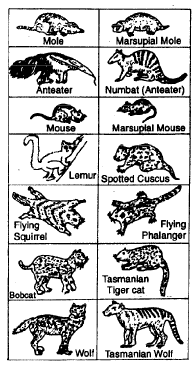 Analogous organs do not show common ancestory but they shows evolution.

3. Evidences from vestigial organs – The organs which are present in reduced form and donot perform any function in the body but correspond to the fully developed functional organs of related animals are called vestigial organs.

They are remainants of organs which were complete and functional in their ancestors.

b. Muscles of pinna (auricular muscles) 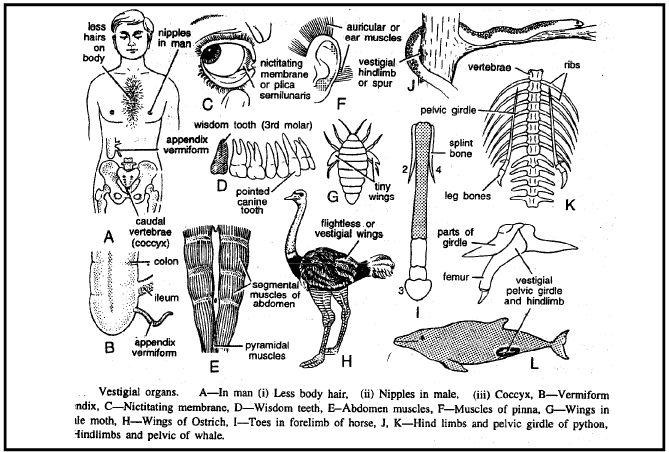 – Hindlimb and pelvic girdle of whale.

(4) Evidences from connecting links – Some animals and plants possess characters of two separate groups. One being primitive and the other is advanced group.

These species act as bridge between two taxonomic groups such organism are called connecting link.

They provide good example of organic evolution and common ancestory.

(i) Virus : Between living and non living

(ii) Euglena : Between plants and animals

(iii) Proterospongia : Between protozoa and porifera

(iv) Neopilina : Between mollusca and annelida

(v) Peripatus : Between annelida and arthropoda

(vi) Archaeopteryx : Between reptiles and birds

(x) Platypus : Between reptiles and mammals

(xi) Echidina : Between reptiles and mammals.

(5) Evidences from Atavism (Reversion) Sometimes in some individuals such characters suddenly appears which were supposed to be present in their ancestors but were lost during the course of development.This phenomenon is known as atavism or reversion. Atavism proves that animals developing atavistic structure have evolved from such ancestors in which these structures were fully developed.

2. Cervical fistula – in some human babies an aperture is present on neck behind the ear called as cervical fistula. It represents pharyngeal gill slits which were present in aquatic vertebrate ancestors.

4. Large and thick body hair reflect our relationship with apes.

1. Protoplasm : Structure and chemical composition of protoplasm is same from protozoa to mammalia.

2. Enzymes : Enzymes perform same function in all animals like Trypsin digest protein from amoeba to man. Amylase digest starch from porifera to mammalia.

4. ATP : This energy rich molecule is formed for biological oxidation in all animals.

7. Cytochrome C is a respiratory protein situated in the mitochondria of all organism. In this protein from 78-88 A.A. are identical in all organism, which show common ancestory.Physiology and biochemistry thus prove that all animals have evolved from some common ancestor.