The primates include Prosimians (Lemurs, tarsiers and related forms) and Anthropoids (Monkeys, apes and Human). They are descended from small rodent like or insectivorous mammals that evolved about 80 million years ago. 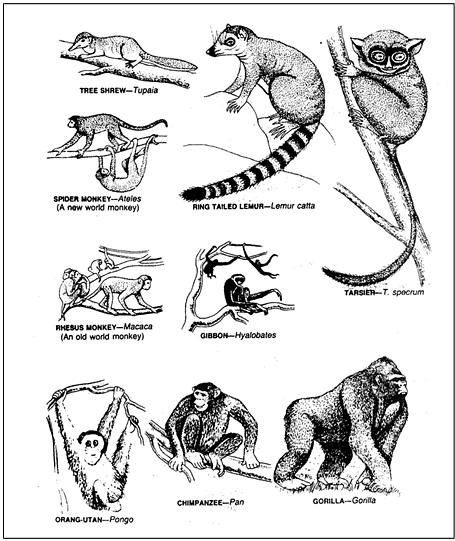 (5)  Menstruation cycle is present in female.

So, Old world monkeys are more closer to human.

Similarities between man and apes : -

(4)  Hairs are present on body

(6)  More intelligent than other animals

(7)  Facial muscles are present for expression of surprise, pleasure.

(8)  Menstruation cycle is present in female of both

(9)  Blood group of AB series are present in both.

(10) Composition of Hb is same in both. Only one amino acid is different in human and Gorilla.

(i)   No. of chromosomes are approximately same in man and apes.

(ii)  DNA contents and DNA matching is same in both. This similarity is

(iii) Banding pattern of chromosome is same in both.

Comparisons have been made between banding pattern of  chromosomes of man and those of the great apes.

Banding techniques enable the identification of individual chromosomes and their parts.

The diploid number of chromosomes in Gorilla, chimpanzee and Oranguttan is 48.

⇒  The total amount of DNA in human diploid cells and that of the great apes are dissimilar.

⇒ Similarity in the fine structural organization of the chromosomes is understood only in terms of a common origin for man and chimpanzee. 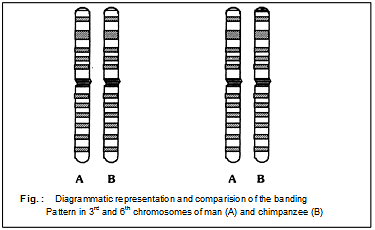 (1)  Propliopithecus : - Origin & evolution in Oligocene epoch so called as Oligocene apes. Evolution about 30-35 million years ago.

(2)  Aegyptopithecus : - Origin and evolution in late Oligocene and Miocene epoch so called as Miocene apes.

(3) Proconsul : - Its fossils were discovered by Leakey from East Africa near Victoria lake in Kenya from Miocene rocks. It walked on its four legs (considered as common ancestor of man and apes).

–    They were forest dwellers spending most of the time one the trees.

–   Origin and evolution in Pliocene epoch.

–   They are considered as ancestors of human but in characteristics same as Dryopithecus, but    spending most of the time on the land.

(8)  Australopithecus :- Prof. Raymond dart discovered a fossil of skull of 5-6 year old baby from the old Pliocene rocks of  Tuang region (S. Africa). He named it Tuang baby, later on he renamed it A. africanus.

–    About 3-2 million years ago it lived in East African grasslands.

–     It was an apeman because it have many characters of man and apes so it is also considered as connecting link between apes and man.

–    Some other varieties of Australopithecus were also discovered by some other scientist.

–    A. boisei [zinjanthropus] by Leakey from East Africa [Tanzania]

A number of other species of Homo appeared and became extinct from time on the evolutionary sense before the origin of homo-sapiens. These extinct species are called prehistoric species of man. 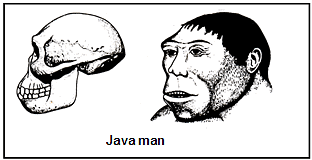 Homo erectus erectus name given by Mayer.  or  Pithecanthropus erectus given by Dubois.

–    They used Tools of bones and stones

–    First man who used fire for hunting, protection and cooking

Sinanthropus erectus name was given by Davidson Black 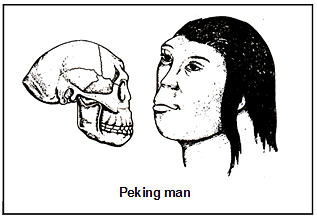 –    W.C. Pai discovered the fossil of peking man from China.

–    Omnivorous, cannibalism has been also found

–    Used fire for cooking meat and for protection.

A fossil of lower jaw obtain from Heidelberg in germany it was discovered by Ottoschotensack.

–    Origin & evolution – in Pleistocene epoch. It is believed that this species was evolved as a branch from main line of evolution and got extinct after some time

-- Fossils were discovered by C. fulhrott from Neanderthal valley of Germany.

Beginning of development of speech center. 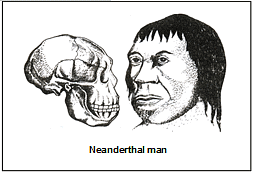 –    This man was hunter and used domesticated dogs in hunting, so domestication of animals started       by cromagnon man.

–    Regarded as the direct ancestor of modern man. 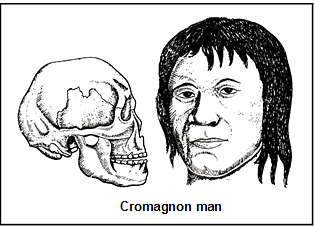 –    Less hairs on body as compared to fossil man

–    It is believed that modern man evolved in Africa.

–    Agriculture was also started by them.

The course of cultural evolution is divided in to three age.

(3)  Hylobates hoolock :- (The Gibbon) is the only ape found in India (forests of Assam) 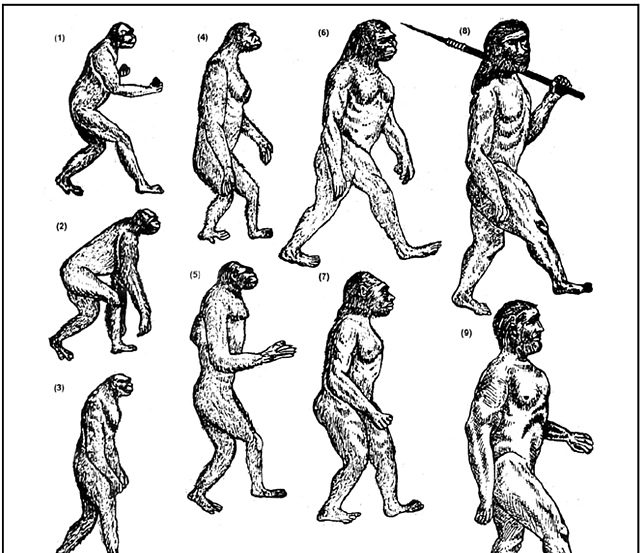 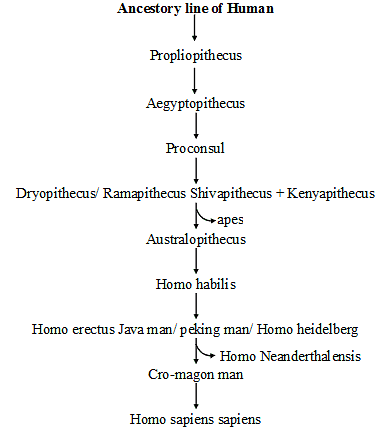 –    Chimpanzee is closest ape to human.

–    Homohabilis is also known as handy man or the tool maker man.

–    W.C. Pai discovered the fossils of Peking man from China.

–    Neanderthal man was first man who believed in 'immortality of soul.'

–    Cromagnon man was a painter and regarded s the direct ancestor of modern man.

–    Homosapiens sapiens is the man of today.

–    Huxley explained origin of man in his book  The man's place in nature'.

–    Darwin explained ancestory of man in his book 'The descent of man'.

–    Human is a member of order primates of class mammalia.

–    Primates originated from elephant shrews but they were not real primates.

The document Origin & Evolution of Man Notes | Study Biology Class 12 - NEET is a part of the NEET Course Biology Class 12.
All you need of NEET at this link: NEET
Join Course