The document Ex 10.4 NCERT Solutions- Circles Class 9 Notes | EduRev is a part of the Class 9 Course Class 9 Mathematics by Full Circle.
All you need of Class 9 at this link: Class 9

Question 1. Two circles of radii 5 cm and 3 cm intersect at two points and the distance between their centres is 4 cm. Find the length of the common chord. Solution: We have two intersecting circles with centres at O and O' respectively.Let PQ be the common chord. Question 2. If two equal chords of a circle intersect within the circle, prove that the segments of one chord are equal to corresponding segments of the other chord. Solution: We have a circle with centre O. Equal chords AB and CD intersect at E.

Question 3. If two equal chords of a circle intersect within the circle, prove that the line joining the point of intersection to the centre makes equal angles with the chords. Solution: We have a circle with centre O and equal chords AB and CD are intersecting at E. OE is joined.To prove that ∠1 = ∠2, let us draw OM ⊥ AB and ON ⊥ CD.In right ΔOME and right ΔONE,

Question 4. If a line intersects two concentric circles (circles with the same centre) with centre O at A, B, C and D, prove that AB = CD (see figure). Solution: We have two circles with the common centre O.

A line ‘l’ intersects the outer circle at A and D and the inner circle at B and C. To prove that AB = CD, let us draw OM ⊥ ℓ. 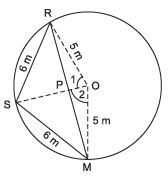 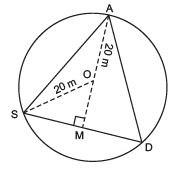 ANGLE SUBTENDED BY AN ARC OF A CIRCLE