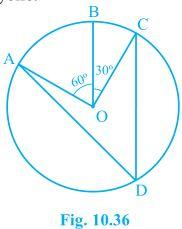 Solution: We know that the angles in the segment of the circle are equal.So,∠ BAC = ∠ CDENow, by using the exterior angles property of the triangleIn ΔCDE we get,∠ CEB = ∠ CDE + ∠ DCEWe know that ∠ DCE is equal to 20°So, ∠ CDE = 110°∠ BAC and ∠ CDE are equal∴ ∠ BAC = 110°.Q.6. ABCD is a cyclic quadrilateral whose diagonals intersect at a point E. If ∠ DBC = 70°, ∠ BAC is 30°, find ∠ BCD. Further, if AB = BC, find ∠ ECD.Solution: Consider the following diagram. 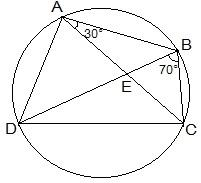 We know that the angles in the semi-circle are equal.So, ∠ ABC = ∠ BCD = ∠ CDA = ∠ DAB = 90°So, as each internal angle is 90°, it can be said that the quadrilateral ABCD is a rectangle.Q.8. If the non-parallel sides of a trapezium are equal, prove that it is cyclic.Solution: Construction:Consider a trapezium ABCD with AB ║CD and BC = AD.Draw AM, CD and BN, CD.In ΔAMD and ΔBNC,The diagram will look as follows: 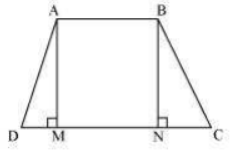 In ΔAMD and ΔBNC,AD = BC (Given)AMD = BCN (By construction, each is 90º)AM = BN (Perpendicular distance between two parallel lines is same)ΔAMD, ΔBNC (RHS congruence rule)ADC = BCD (CPCT)...(1)BAD and ADC = 180º....(2)BAD and BCD = 180º [Using equation (1)]This equation shows that the opposite angle are supplementary.Therefore, ABCD is a cyclic quadrilateral.Q.9. Two circles intersect at two points B and C. Through B, two line segments ABD and PBQ are drawn to intersect the circles at A, D and P, Q respectively (see Fig. 10.40). Prove that ∠ ACP = ∠ QCD. 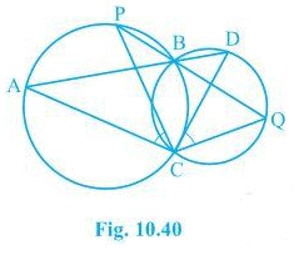 Solution: Construction:Join the chords AP and DQ.For chord AP, we know that angles in the same segment are equal.So, ∠ PBA = ∠ ACP ......(i)Similarly for chord DQ,∠ DBQ = ∠ QCD .....(ii)It is known that ABD and PBQ are two line segments which are intersecting at B.At B, the vertically opposite angles will be equal.∴ ∠ PBA = ∠ DBQ ......(iii)From equation (i), equation (ii) and equation (iii) we get,∠ ACP = ∠ QCD.Q.10. If circles are drawn taking two sides of a triangle as diameters, prove that the point of intersection of these circles lie on the third side.Solution: First draw a triangle ABC and then two circles having diameter as AB and AC respectively.We will have to now prove that D lies on BC and BDC is a straight line. Since, ∠ ABC and ∠ ADC are 90°, it can be said that They lie in the semi-circle.So, triangles ABC and ADC are in the semi-circle and the points A, B, C and D are concyclic.Hence, CD is the chord of the circle with center O.We know that the angles which are in the same segment of the circle are equal.∴ ∠ CAD = ∠ CBDQ.12. Prove that a cyclic parallelogram is a rectangle.Solution: It is given that ABCD is a cyclic parallelogram and we will have to prove that ABCD is a rectangle.