The document Ex 10.6 NCERT Solutions- Circles Class 9 Notes | EduRev is a part of the Class 9 Course Class 9 Mathematics by Full Circle.
All you need of Class 9 at this link: Class 9

Question 1. Prove that the line of centres of two intersecting circles subtends equal angles at the two points of intersection. Solution: We have two circles with centres O and O' respectively such that they intersect each other at P and Q.To prove that ∠OPO' = ∠OQO', let us join OP, O'P, OQ, O'Q and OO'.

Question 2. Two chords AB and CD of lengths 5 cm and 11 cm respectively of a circle are parallel to each other and are on opposite sides of its centre. If the distance between AB  and CD is  6 cm, find the radius of the circle. Solution: We have a circle with centre O. (Chord AB) || (Chord CD) and the perpendicular distance between AB and CD is 6 cm and AB = 5 cm, CD = 11 cm. 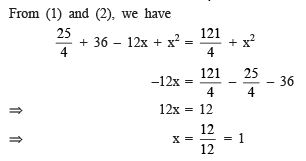 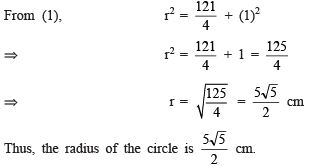 Question 3. The lengths of two parallel chords of a circle are 6 cm and 8 cm. If the smaller chord is at distance 4 cm from the centre, what is the distance of the other chord from the centre?

Solution: We have a circle with centre O. Parallel chords AB and CD are such that the smaller chord is 4 cm away from the centre.Let us draw OP ⊥ AB and join OA and OC.∴ OP ⊥ AB∴ P is the mid-point of AB. 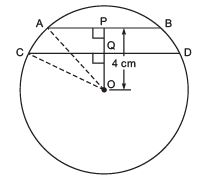 Question 4. Let the vertex of an angle ABC be located outside a circle and let the sides of the angle intersect equal chords AD and CE with the circle. Prove that ∠ABC is equal to half the difference of the angles subtended by the chords AC and DE at the centre. Solution: We have an ∠ABC such that the arms BA and BC on production, make two equal chords AD and CE. Let us join AC, DE and AE 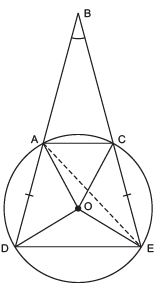 Question 5. Prove that the circle drawn with any side of a rhombus as diameter, passes through the point of intersection of its diagonals. Solution: We have a rhombus ABCD such that its diagonals AC and BD intersect at O.Taking AB as diameter, a circle is drawn. Let us draw PQ || AD and RS || AB, both passing through O. P, Q, R and S are the mid-points of DC, AB, AD and BC respectively. ∵ All the sides of a rhombus are equal.

Question 8. Bisectors of angles, A, B and C of a triangle ABC intersect its circumcircle at D, E and F respectively. Prove that the angles of the triangle DEF are 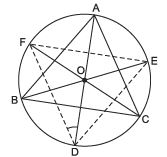 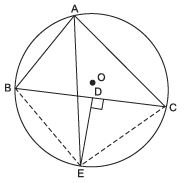