Q1. Which of the following statements are true and which are false? Give reasons for your answers.(i) Only one line can pass through a single point.(ii) There are an infinite number of lines that pass through two distinct points.(iii) A terminated line can be produced indefinitely on both sides.(iv) If two circles are equal, then their radii are equal.(v) In the following figures, if AB = PQ and PQ = XY, then AB = XY.

[If we mark a point O on the surface of a paper and using pencil and ruler, we can draw an indefinite number of straight lines passing through O.] 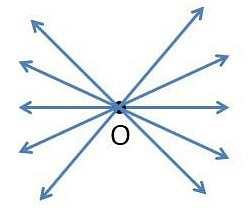 [∵ Postulate 2 says that “A terminated line can be produced indefinitely.”]

[∵ Superimposing the region of one circle on the other, we find them coinciding. So, their centres and boundaries coincide. Thus, their radii will coincide.]

[∵ According to Euclid’s axiom, things that are equal to the same thing are equal to one another.]Q2. Give a definition for each of the following terms. Are there other terms that need to be defined first? What are they, and how might you define them?(i) parallel lines (ii) perpendicular lines (iii) line segment (iv) radius of a circle (v) squareAns: Yes, we need to have an idea about the terms, point, line, ray, angle, plane, circle and quadrilateral, etc. before defining the required terms.Point: A small dot made by a sharp pencil on the surface of paper gives an idea about a point.It has no dimensions. It has only a position.Line: A line is an idea that it should be straight and that it should extend indefinitely in both directions. It has no endpoints and has no definite length.

Ray: A part of a line that has only one endpoint and extends indefinitely in one direction. A ray has no definite length.Angle: Two rays having a common endpoint form an angle.Plane: A plane is a surface such that every point of the line joining any two points on it, lies on it.Circle: A circle is the set of all those points in a given plane that are equidistant from a fixed point in the same plane. The fixed point is called the centre of the circle.Quadrilateral: A closed figure made of four line segments is called a quadrilateral.Definitions of the required terms are given below:

(i) Parallel Lines: Two lines ‘n’ and ‘m’ in a plane are said to be parallel if they have no common point and we write them as n || m. 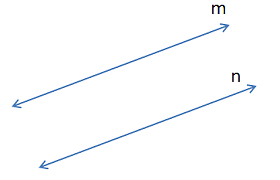 (ii) Perpendicular Lines: Two lines ‘p’ and ‘q’ lying in the same plane are said to be perpendicular if they form a right angle and we write them as p ⊥ q. 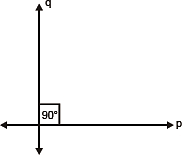 (iii) Line Segment: A line segment is a part of the line having a definite length. It has two end-points.In the figure, a line segment is shown having endpoints ‘A’ and ‘B’. It is written as

(v) Square: A quadrilateral in which all the four angles are right angles and all the four sides are equal is called a square. In the figure, PQRS is a square.

No, these postulates do not follow Euclid’s postulates, however, they follow from the axiom: “Given two distinct points, there is a unique line that passes through them.”