The document Explanation and Solved Examples GMAT Notes | EduRev is a part of the GMAT Course Quantitative Aptitude for GMAT.
All you need of GMAT at this link: GMAT

Definition: A circle is a simple closed figure in which all the points that lie on it are equidistant from a point called centerHere’s a circle with center O. Here are some basics regarding circle and its properties:

Radius: The line segment that connects the center of the circle to any point on the circle is called radius. OB, OA, OX, OY are the different radii of the circle in the figure above. Infinite number of radii can be drawn for any circle.

Diameter: The line segment that passes through the center and connects two points on the circle is called the diameter. AB is the diameter of the circle. Like radius, infinite number of diameters can be drawn in a circle.Diameter = 2 * radius OrRadius = Diameter / 2

Chord: The line segment that connects any two points on a circle is a chord. Infinite number of chords can be drawn in a circle. XY is a chord of the circle.Apparently, the diameter is the longest chord of a circle.

Area:The area of a circle is given by the formula,A = pr2Where r is the radius of the circle.Since r=d/2, Area is also given byA = pd2/4

Solved examples involving CirclesProblem 1: Area of the circle above is 81p. ∠DAB = 55°. Find the central angle subtended by arc DB and the area and circumference of the sector DOB. 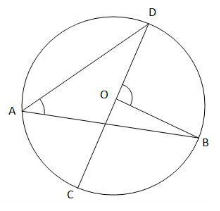 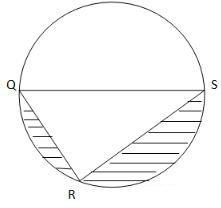