Answer:  Climate refers to the sum total of weather conditions and variations over a large area for a long period of time (more than 30 years).

Answer:  Weather refers to the state of the atmosphere over an area at any point in time.

3) What are the elements of weather and climate?

Answer: Temperature, atmospheric pressure, winds, humidity and precipitation are the elements of weather and climate.

4) What is the climate of India?

Answer: India's climate is described as a 'Monsoon Type' climate.

5) What is the variation of temperature in India?

Answer: In some parts of Rajasthan the highest temperature is 50oC and it is around 45oC at Drass in Jammu and Kashmir.

6) What is the variation of annual precipitation in India?

Answer:  The annual precipitation is over 400 cms in Meghalaya and less than 10 cms in Ladakh and western Rajasthan.

Answer: The word monsoon is derived from the Arabic word 'Mausim' which literally means season. Monsoon refers to the seasonal reversal in the wind direction during a year.

8) Why air temperature decreases from the equator to polar?

Answer: Due to the curvature of the earth, the amount of total energy received varies according to latitude. As a result, air temperature decreases from the equator towards the poles.

9) Why hills are cooler during summer and people prefer to go to hill stations?

Answer: As one goes from the surface of the earth to higher altitudes, the atmosphere becomes less dense and temperature decreases.

10) What does the term 'Sentimentality' mean?

Answer: As the distance from the sea increases its moderating influence decreases and the people experience extreme weather conditions. This condition is known as sentimentality, i.e. very hot during summers and very cold during winters.

11) Which tropic passes just from the centre of India?

12) Which surface winds are blowing from India?

Answer: India lies in the regions of northeasterly winds.

13) What is Coriolis force?

14) What do you know about 'South-Western Monsoon winds?

Answer: Air moves from the high-pressure area over the southern Indian ocean, in a south-easterly direction, crosses the equator, and turns right towards the low-pressure areas over the Indian subcontinent. These are known as South- West Monsoon Winds.

16) What are subtropical westerly Jet streams?

Answer: The Jet streams are located approximately over 27o to 30o North Latitude, therefore they are known as subtropical westerly Jet streams.

17) In which parts of India subtropical westerly Jet streams blow?

Answer: Over India, these jet streams blow south of the Himalayas, all throughout the year except in summers. They are responsible for the western cyclonic disturbances in the north and north-western parts.

18) What are tropical easterly Jet streams?

19) What are Western cyclonic disturbances?

Answer: The Western cyclonic disturbances are weather phenomena of the winter months brought in by the westerly flow from the Mediterranean region.

20) When does tropical cyclone occur in India?

Answer: Tropical cyclones occur during the monsoon as well as in October. These cyclones originate in the Bay of Bengal, hit the eastern coast of India and cause heavy rains causing damage to life and property.

21) Who noticed the phenomena of the monsoons in India?

Answer: The sailors who came to India in historic times were one of the first to have noticed the phenomenon of monsoon. They benefitted from the reversal of the wind system as they came by sailing ships at the mercy of the winds.

22) How differential heating and cooling of land and water help in understanding the mechanism of the monsoon?

Answer: Differential heating and cooling of land and water create a low pressure on the land of India while the seas around experience comparatively high pressure leading to the shifting of winds from south to north.

23) What do you understand by ITCZ?

Answer: It means Inter-Tropical Convergence Zone. It is a broad trough of low pressure in equatorial latitude. This is where northeast and southeast trade winds converge.

24)  How does the presence of high pressure in the east of Madagascar affect the Indian monsoon?

25) What do you understand by the term SO?

Answer: El Nino is a warm ocean current that flows past the Peruvian coast in place of cold Peruvian current every 2 to 5 years.

Answer: ENSO is the combination of El Nino and the southern oscillation. The changes in pressure conditions are connected to El Nino, hence the phenomenon is referred to as ENSO.

Answer: Around the time of arrival of the monsoon the normal rainfall increases suddenly, and continues constantly, for several days. This is known as 'burst of the monsoon

29) Name the two branches of South-West Monsoons of India.

31) When do we experience the cold-weather season in India?

Answer:  It begins from mid-November in northern India and stays till February.

32) What is the average temperature of North India and Coastal plains during winter?

Answer:  The average temperature in coastal areas is between 24o - 25oC, while in the northern plains, it ranges between 10o to 15o Celsius.

33) Why winters in India experience a dry season?

Answer: During this season northeast trade winds prevail over the country. Since they blow from land to sea in most part of the country, it is the dry season.

Answer: The total amount of winter rainfall is locally known as 'Mahawat'.

35) In which months do we experience the hot weather season?

Answer: In the months of March, April, May and June, it is a hot weather season in India.

36) In which regions of India does 'Elongated low-Pressure Area' develop?

Answer: Towards the end of May an elongated low-pressure area develops in the region extending from the Thar desert in the northwest to Patna and Chotanagpur Plateau in the east and southeast.

Answer: These are strong gusty, hot dry winds blowing during the day over the north and northwestern India.

38) What is the effect of 'Dust storms' in India during summers?

Answer: Dust storms are very common during the month of May in northern India. These storms bring temporary relief as they lower the temperature and may bring light rain and cool breeze.

Answer: Kaal means destruction or calamity brought in the month of Baisakh. It is known as Kaal Baisakhi. It occurs in West Bengal and is pre-monsoon showers.

Answer: Mango showers are the pre-monsoon showers taking place on the coast of Kerala and Karnataka. Since they help in the early ripening of mangoes, they are called Mango showers. 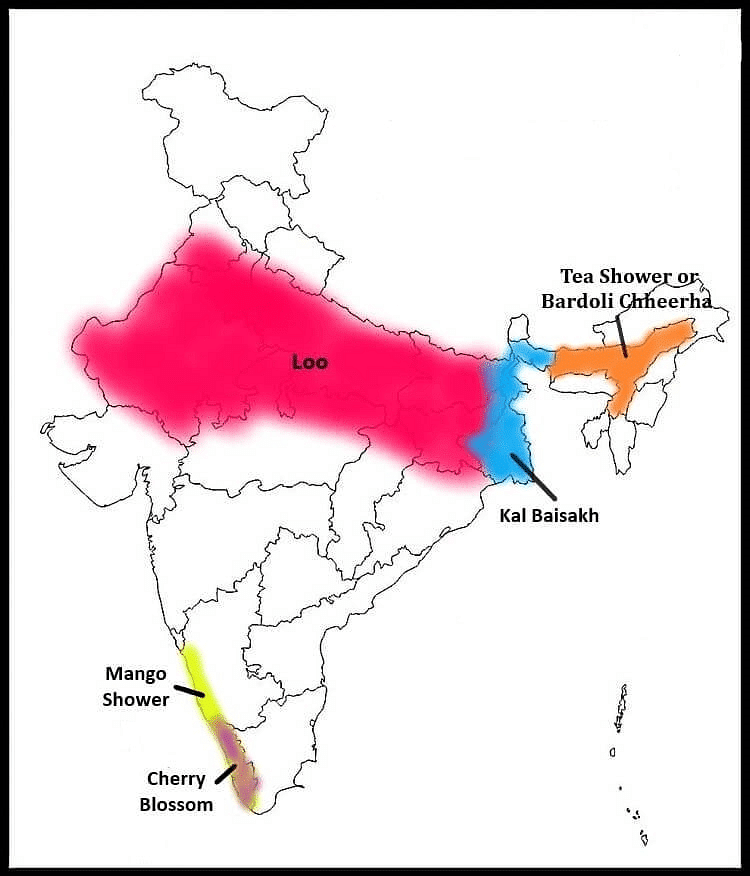 41) Which region of India receives the highest rainfall in the world?

Answer: Mawsynram in the southern region of Khasi Hills in Meghalaya, receives the highest average rainfall in the world.

42) What does 'breaks in rainfall' mean?

Answer: It means wet and dry spells of rain. The monsoon rainfall takes place only for a few days at a time, these rainless intervals in between are called "breaks in rainfall".

43) How do heavy floods occur during monsoons?

Answer: When the axis of rainfall shifts closer to the Himalayas, there are large dry spells in the plains and widespread rain occurs in the mountainous catchment areas of Himalayan rivers. These heavy rains bring devastating floods causing damage to life and property in the plains.

44) How is monsoon known for its uncertainty?

Answer: Monsoon is known for its uncertainty there are wet spells both and also these spells of rains vary in intensity frequency and duration.

Answer: In the month of October monsoon winds retreat. It is marked by clear skies and a rise in temperature. Owing to the conditions of high temperature and humidity, the weather becomes rather oppressive during the day. This condition is called 'October heat'.

46) Differentiate between climate and weather.

47) What type of climate does India have?

48) Why does India have a monsoon type of climate?

49) How does the latitude affect India's climate?

50) How does altitude affect the climate of India?

51) What is the Coriolis force? Describe its effect briefly on the world climate.

52) What are western cyclonic disturbances?

53) What are Tropical cyclones?

54) Give a brief note on the 'Inter-Tropical Convergence Zone.

56) How is monsoon known for its uncertainties?

57)   What do you understand by October Heat?

58) Why are Thiruvananthapuram and Shillong rainier in June?

59) Why is July rainier in Mumbai than in Thiruvananthapuram?

61) Why is Shillong rainier than Kolkata?

62) How does Delhi receive more rainfall than Jodhpur?

63) Why has Leh moderate precipitation almost throughout the year?

64) What are the variations in Indian temperature?

65) What are the variations in precipitation in India?