Q.1. Name the only country to have granted universal adult franchise till the 19th century.Ans. New Zealand was the first country which granted the universal adult franchise in 1893.Q.2. Our Constitution makers were influenced by which country's practice of parliamentary democracy?Ans. Our Constitution makers were influenced by Great Britain's practice of parliamentary democracy.Q.3. What is a referendum?Ans.  A referendum is a direct vote in which an entire electorate is asked to either accept or reject a particular proposal. 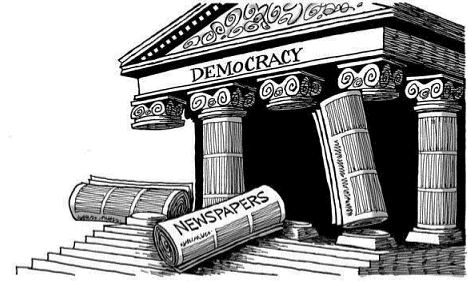 Q.43. How did Pinochet establish army rule in Chile after a successful coup? Or State any three major developments in Chile after the military coup of September 1973.Ans. On 11th September 1973, a military coup under the leadership of General Augusto Pinochet took place in Chile.Major developments in Chile after the military coup:(i) A military dictatorship was established.(ii) Pinochet's Government tortured and killed those who supported democracy and did not support him.(iii) More than 3000 people were killed by the military.(iv) General Bachelet's wife and daughter put in prison and tortured.(v) From a government that was elected by the people, the power shifted to the military officers.Q.44. How was democracy restored in Chile? Or How did Pinochet's military dictatorship come to an end? Explain.Ans.

Q.45. Explain any three salient features of democracy.Ans. Salient features of democracy are:(i) Democracy is a form of government that allows people to choose their rulers. This choice should be made through a free and fair election, where those people currently in power have a fair chance of losing.(ii) In a democracy, people can express their opinions freely, form political associations and organize political action.(iii) In a democracy, each adult citizen, including women, must have one vote and each vote must have one value.Q.46. Why was an independent trade union so important in Poland? Why are trade unions necessary?

Q.47. Why were women given voting rights much later than men in most countries? Why did this not happen in India?Ans.

Q.48. What should be the policy of the Government of India towards the Military rulers of Myanmar?Ans.

Q.50. Should the permanent members of the UN be given the power to veto?Ans.

Q.52. Describe any three demands of the workers of 'Lenin Shipyard' during their strike which started in August 1980 in Poland?Ans. On 14 August 1980, the workers of Lenin Shipyard in the city of Gdansk went on a strike.Their main demands were:(i) The strike began with a demand for taking back a woman crane operator, who was unjustly dismissed from service.(ii) They wanted the right to form independent trade unions.(iii) They also demanded the release of political prisoners and an end to censorship on the press.