Q1. What does 'Food Security' mean?

Food security means availability, accessibility and affordability of food to all people at all times. 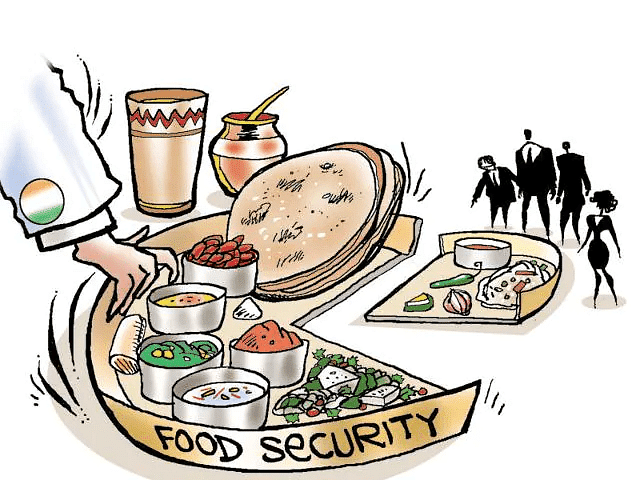 Q2. On what factors does food security depend?

Food security depends on the Public Distribution System (PDS) and government vigilance and action at times when this security is threatened.

Availability of food means food production within the country, accessibility means food within reach of every person and affordability is that an individual has enough money to buy sufficient safe food.

Q4. How is food security ensured in a country?

Food security is ensured in a country only if enough food is available for all persons, all persons have the capacity to buy food of acceptable quality and there is no barrier to access to food.

The poorest section of the society might be food insecure most of the times while persons above the poverty line might also be food insecure when the country faces a national disaster/calamity like drought, flood, tsunami, widespread failure of crops causing famine, etc.

Q6. How is food security affected during a calamity?

Due to a national calamity say, drought, the total production of food grain decreases. It creates a shortage of food in the affected areas. Due to shortage of food the prices go up. At the high prices, many people cannot afford to buy food.

Q7. How does the situation of starvation arise?

If any calamity happens in a very widespread area or is stretched over a large time period, it may cause a situation of starvation. A massive starvation might take the form of famine.

Q8. How do famines lead to widespread deaths?

A famine is characterised by widespread deaths due to starvation and epidemics caused by forced use of contaminated water or decaying food and loss of body resistance due to weakening from starvation.

Q9. Which was the most devastating famine to have occurred in India?

The most devastating famine that had occurred in India was the famine of Bengal in 1943. This famine killed thirty lakh people in the province of Bengal.

Q10. In which areas of India even today famine has caused starvation deaths?

Q11. What kind of people in rural areas is food insecure?

The worst affected groups are landless people with little or no land to depend upon, traditional artisans, providers of traditional services, petty self employed workers and destitutes including beggars.

Q12. What type of people in urban areas is food insecure?

In the urban areas, the food insecure families are those whose working members are generally employed in ill-paid occupations and the casual labour markets. These workers are largely engaged in seasonal activities and are paid very low wages that just ensure basic survival.

Q13. Which other parts of society are prone to food insecurity?

The SCs, STs and some sections of OBCs who have either poor land base or very low land productivity are prone to food insecurity.

Q14. How people affected by natural disasters are food insecure?

The people affected by natural disasters, who have to migrate to other areas in search of work, are also among the most food insecure people, since they are not settled in their life.

Q15. Is it true that a high incidence of malnutrition prevails among women?

This is a matter of serious concern as it is true. It puts even the unborn baby at risk of malnutrition. A large proportion of pregnant and nursing mothers and children under the age of 5 years constitute an important segment of food insecure population.

Q16. In which regions are food insecure people disproportionately large in our country?

The food insecure people are disproportionately large in some regions of the country, such as economically backward states with a high incidence of poverty, tribal and remote areas, regions more prone to natural disasters, etc.

Q17. Which states of India account for the largest number of food insecure people?

The states of Uttar Pradesh, Bihar, Jharkhand, Odisha, West Bengal, Chhattisgarh, parts of Madhya Pradesh and Maharashtra account for the largest number of food insecure people in the country.

Q18. Does hunger cause food insecurity?

Hunger is another aspect indicating food insecurity, arising from poverty.

Q19. How does 'chronic hunger' occur?

Chronic hunger is a consequence of having persistently inadequate diet in terms of quantity and quality. Poor people suffer from chronic hunger because of very low income and, in turn, inability to buy food even for survival.

Q20. What do you understand by 'seasonal hunger'?

Q21. What policies were adopted by Indian government to remove food insecurity?

After Independence, Indian policy makers adopted all measures to achieve self sufficiency in food grains, for that a new strategy of 'Green Revolution' was introduced to increase production of wheat and rice in our country.

Q22. How was the success of 'Green Revolution' felicitated by Indira Gandhi?

Indira Gandhi, the then Prime Minister, officially recorded the impressive strides of the Green Revolution in agriculture by releasing a special stamp entitled 'Wheat Revolution' in July 1968.

Q23. Which states achieved the highest rate of growth in food grain production during Green Revolution?

Punjab and Haryana achieved the highest rate of growth in the production of wheat.

Q24. Which states continued to lag behind in food production despite Green Revolution?

Q25. How did India become self sufficient?

India has become self sufficient in food grains during the last thirty years because of a variety of crops grown all over the country.

Buffer stock is the stock of food grains, namely wheat and rice procured by the government through Food Corporation of India (FCI).

Q27. What is the Minimum Support Price?

The FCI purchases wheat and rice from the farmers in states where there is surplus production. The farmers are paid a pre-announced price for their crops. This price is called Minimum Support Price.

Q28. How does FCI purchase grains from the farmers?

The Minimum Support Price (MSP) is declared by the government every year before the sowing season to provide incentives to the farmers for raising the production of these crops. The purchased food grains are stored in granaries.

Q29. Why is buffer stock created by the government?

Buffer stock is created to distribute food grains in the deficit areas and among the poorer strata of society at a price lower than the market price also known as issue price. It also helps resolve the problem of shortage of food during adverse weather conditions or during the periods of calamity.

Q30. What is Public Distribution System?

The food procured by the FCI is distributed through government regulated ration shops among the poorer section of the society. This is called the public distribution system (PDS).

Q31. What are Fair Price Shops?

Q32. Which families can buy from these Ration Shops?

Any family which is below the poverty line gets a ration card. A ration card can buy them a stipulated amount of certain essential commodities like food grains or kerosene, every month from a nearby ration shop.

Q33. When was rationing system introduced in India?

The rationing system introduced in India in 1940s after the disastrous Bengal famine occurred.

Q34. When was rationing system revived after Bengal famine?

The rationing system was revived in the wake of an acute food shortage during the 1960s prior to the Green Revolution.

Poverty Alleviation Programmes such as PDS, mid-day meals, etc. are exclusively food security programmes. Most of these PAPs are meant for rural areas and enhance food security.

Q37. What do you know about National Food for Work Programme?

This programme was launched on November 14, 2004 in 150 most backward districts of the country with the objective of intensifying the generation of supplementary wage employment.

Over the years, the policy related to PDS has been revised to make it more efficient and targeted. In 1992 Revamped Public Distribution System was introduced in 1,700 blocks in the country. The target was to provide the benefits of PDS to remote and backward areas

From June 1997, in a renewed attempt. Targeted Public Distribution System (TPDS) was introduced to adopt the principle of targeting the 'poor in all areas'. It was for the first time that a differential price policy was adopted for poor and non-poor.

Q40. Which two schemes were linked with the PDS system by the government?

In 2000, two special schemes were launched - Antyodaya Anna Yojana (AAY) and the Annapurna Scheme with special target groups of 'poorest of the poor' and 'Senior Citizens', respectively.

Q41. What are the benefits of PDS?

The PDS has proved to be the most effective instrument of government policy over the years in stabilising prices and making food available to the poor at affordable prices.

Q42. How has Minimum Support Prices supported the farmers?

The minimum support prices and procurement has contributed to an increase in food grain production and provided income security to farmers in certain regions.

Q43. Why has PDS been facing severe criticism?

Instances of hunger are prevalent despite overflowing granaries. FCI god owns are overflowing with grains, with some rotting away and some being eaten by rats.

'Subsidy' is a payment that a government makes to a producer to supplement the market price of a commodity. Subsidies can keep consumer prices low while maintaining a higher income for domestic producers.

Q45. Why is a high level of buffer stock undesirable?

There is a general consensus that high level of buffer stocks of food grains is very undesirable and can be wasteful. The storage of massive food stocks has been responsible for high carrying cost, in addition to wastage and deterioration in grain quality.

Q46. What is the impact of intensive utilisation of water in the cultivation of rice on the environment?

The intensive utilisation of water in the cultivation of rice has also led to environmental degradation and fall in the water level, threatening the sustainability of the agricultural development in the states of Punjab and Haryana.

Q47. What kind of malpractices are there among PDS dealers?

PDS dealers are sometimes found resorting to malpractices like diverting the grains to open market to get better margins, selling poor quality grains at ration shops, irregular opening of the shops, etc.

Q48. What is the role of cooperatives in food security?

The cooperatives are also playing an important role in food security in India especially in southern and western parts of the country. The cooperative societies set up shops to sell low priced goods to poor families.

ADS is Academy of Development Science which has facilitated a network of NGOs for setting up grain banks in different regions.

Q51. What is the contribution of Grain Banks?

ADS tried to set up Grain Banks in Maharashtra to facilitate replication through other NGOs and to influence the Government policy on food security. These are paying rich dividends. It has been acknowledged as a successful and innovative food security intervention.

Q52. What does 'food security' mean? On what factors does food security of a country depend?

Food security means availability, accessibility and affordability of food for all people at all times. It means something more than getting two square meals. Food security depends on:

Q53. What are the dimensions of 'food security'?

The dimensions of food security are:

Food security is needed because:

Q55. How is food security affected during a calamity?

Q56. What is a 'famine'? Which states in India are affected by famines?

A famine is characterised by widespread deaths due to starvation and epidemics caused by forced use of contaminated water or decaying food and loss of body resistance due to weakening from starvation: