1) What is meant by 'deforestation'?

Answer:    Cutting down of forests is referred to as deforestation.

2) Which commercial crops were grown by British after deforestation?

Answer:Jute, sugar, wheat and cotton were the commercial crops grown by the British in India to feed the growing population of Europe.

3) Why were forests considered unproductive by the British?

Answer: They considered them to be wild and wasteful. Needs to be 'brought under cultivation so that the land could yield agricultural products and reverse and enhance the income of the state.

4) How could English ships be built without a regular supply of strong and durable timber?

Answer:(i) Search parties of Great Britain were sent to explore the forest regions of India. (ii) Within a decade, trees were being felled on a massive scale and vast quantities of timber were being exported from India.

5) How spread of railways created a new demand for timber?

Answer: To run locomotives, wood was needed as fuel and to Jay railway lines, sleepers were essential to hold the tracks together. Also, wood was used in the interior of the railway coaches.

6) Who was the first Inspector General of Forests in India?

7) Name the forest Institute of Dehradun set up in 1906 by Brandis.

8) What does 'Scientific Forestry' mean?

Answer:  (i) Natural Forests which had lots of different types of trees were cut down. (ii) In their place one type of tree was planted in straight rows, called as plantation. This is known as scientific forestry.

9) Name the three categories of forests as mentioned in the Act of 1878.

10) Which species of trees were promoted for the building of ships or railways?

Answer:Teak and Sal species were promoted for the building of ships or railways.

11) From which fruit was oil extracted for cooking and lighting lamps?

Answer:  Fruit of the Mahua tree.

12) What was the use of a dried scooped out gourd?

13) What was the effect of Forest Act on the people living nearby?

Answer:People were now forced to steal wood from the forests, and if they were caught, they were at the mercy of the forest guards who would take bribes from them.

14) What do you mean by Swidden Agriculture?

Answer: (i) It is a traditional agricultural practice in many parts of Asia, Africa and South America. It is also called shifting cultivation.(ii) A piece of land is cleared and cultivation is practiced. When it lost fertility, they used to shift to the other forest covered area. 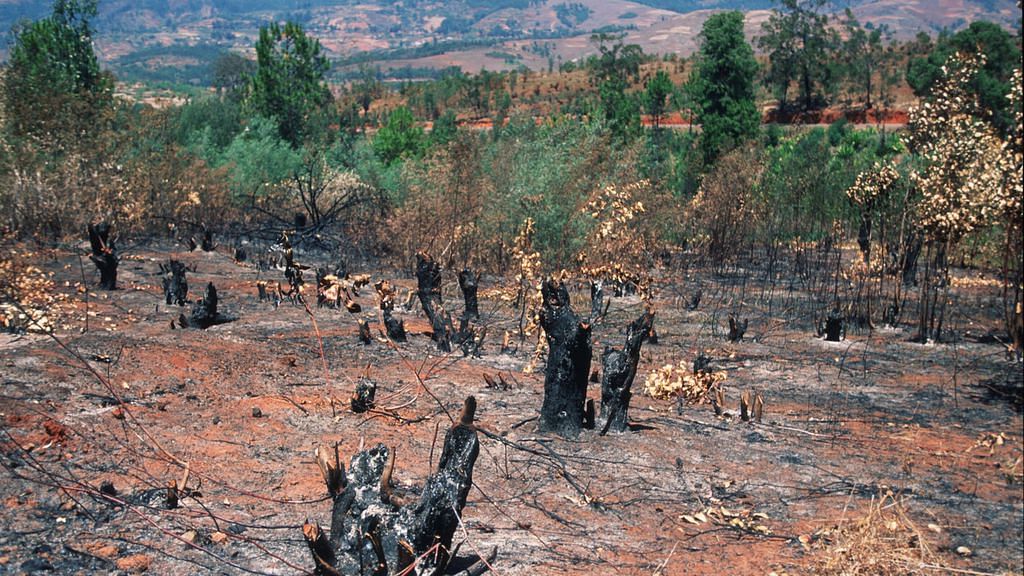 15) What kind of mixture of crops were grown in these plots of forests?

Answer: In Central India and Africa it would be millets, in Brazil manioc, and in other parts of Latin America maize and beans.

16) How did new forest laws affect the hunter forest dwellers?

Answer: (i) Many people who lived in or near forest had survived by hunting deer, patridges and a variety of small animals. (ii) This customary practice was prohibited by the forest laws. Those caught hunting were now punished for poaching.

17) How many tigers were killed by British administrator George Yule?

18) Give one example of a community which had left their traditional occupations and started trading in forest products.

Answer:With the growing demand for rubber in the mid nineteenth century, the Mundurucu people of Brazilian Amazon who lived in villages on high ground and cultivated manioc, began to collect latex from wild rubber trees for supplying to traders.

19) What kind of products did nomadic communities of India like Banjaras trade in?

20) What were 'Criminal tribes' forced to do by the British?

Answer:They were forced to work instead in factories, mines and plantations under British supervision.

21) Which tribes of India were recruited to work on tea plantations?

Answer:Santhals and Oraons from Jharkhand and Gonds from Chhattisgarh were recruited to work on tea plantations.

22) Name the river which flows across Bastar from east to west.

23) Name the communities living in Bastar.

24) Where is Bastar located?

Answer:Bastar is located in the southernmost part of Chhattisgarh and it borders Andhra Pradesh, Orissa and Maharashtra.

25) If people from a village of Bastar want to take wood from the forest of another village, what would they do?

Answer:They would pay a small fee called devsari, daud or man in exchange of the wood taken from the forest of another village.

Answer: Some villagers of Bastar were allowed to stay on in the reserved forests on the condition that they worked free for the forest department in cutting and transporting trees and protecting the forests from fires. These villagers came to be known as 'forest villagers'.

27) Name the leader who rebelled against the British.

Answer:Java is a rice - producing island in Indonesia.

29) Which colonial power ruled over Indonesia?

30) Which community of Java were skilled forest cutters and shifting cultivators?

31) What restrictions were imposed by the Dutch in Java forest laws?

Answer:He was from Randublatung village of Java who began questioning state ownership of the forests.

Answer: In Java, just before the Japanese occupied the region, the Dutch followed a Scorched Earth Policy, destroying Sawmills and burning huge piles of giant teak logs so that they would not fall into Japanese hands.

34) What are the various uses of forests in our day-to-day lives?

Answer: (i) Paper is used for making books, wood is used for desks and tables, doors and windows, dyes are used for colouring our clothes, we get spices to add to our food, the cellophane wrapper of toffees, tendu leaf in bidis, gum, honey and coffee, tea and rubber. (ii) Oil in chocolates comes from sal seeds, the tannin used to convert skins and hides into leather or the herbs used for medical purposes are all derived from forests.(iii) Forests also provide bamboo, wood for fuel, grass charcoal, packaging, fruits, flowers, animals, birds, etc.

35)   What were the main causes of deforestation in India during the British rule?

Answer:The main causes of deforestation were the following:(i) The British encouraged the production of commercial crops like jute, sugar, wheat and cotton. The production of food grains was needed to feed the growing urban population and raw material was required for British industries in Britain.(ii) The British thought that forests were unproductive. They were of the view that space covered with forests could be used for cultivation which could fetch them revenue and enhance the income of the state also.

36) How were forests cleared to expand the railway network in India in the early 19th century?

Answer:(i) The spread of the railways from the 1850s created a new demand for timber. (ii) Railway was needed for the spread of trade in India. To run locomotives, wood was needed as fuel and to lay railway lines, sleepers were required to hold tlie tracks together. (iii) As the railway tracks spread, a large number of trees were felled. The government gave contracts to individuals to supply timber. These contractors began cutting trees indiscriminately.

Answer: Main characteristics of Tropical deciduous forests: (i) These are the most wide spread forests in India. (ii) They are also called the monsoon forests and are spread over the region. (iii) They receive rainfall between 200 cm and 70 cm. (iv) Trees shed their leaves for about six to eight weeks in dry summer.

38) What circumstances led to the foundation of 'scientific forestry' by the German expert Dietrich Brandis?

Answer: (i) Brandis felt that a proper system had to be adopted to manage forests and that people had to be trained in the science of conservation.(ii) He needed legal sanction and rules on the use of forests.(iii) He felt that the felling of trees and grazing had to be restricted so that forests could be preserved for timber production.(iv) He set up the Indian Forest Service in 1864 and helped formulate the Indian Forest Act of 1865.(v) The Imperial Forest Research Institute was set up at Dehradun in 1906.(vi) The system they taught here was called 'scientific forestry'.

39) What do you know about Scientific Forestry?

Answer:(i) In scientific forestry, natural forests which had different types of trees were cut down. In their place, one type of trees were planted in straight rows which is called plantation.(ii) Forest officials surveyed the forest, estimated the area and made working plans for the forest management.(iii) They scientifically planned on how much of the plantation areas to cut every year. The areas cut were then to be replanted, so that they were ready to be cut again in some years.

41) How did Forest Acts affect the villagers?

Answer: (i) Forest Acts meant severe hardships for the villagers.(ii) They could not cut wood for their houses. They were not allowed to graze their cattle, collect fruits and roots or do hunting or fishing in these forests.(iii) Thus, they stole wood from the forests and if caught, were at the mercy of the forest guards who would take bribes from them.(iv) It was common for the police constable and forest guards to harass the villagers by demanding free goods from them.

42) How did hunting become a big sport for the Indian people?

Answer: (i) In India, hunting of tigers and other animals had been part of the culture of the court and nobility from centuries.(ii) Many Mughal paintings show princes and emperors enjoying their hunt.(iii) Under colonial rule, the scale of hunting increased to such an extent that various species became almost extinct.

43) In what ways did the British regulate forest trade?

Answer:  (i) The British government gave many large European trading firms the sole right to trade in the forest products of particular areas.(ii) Grazing and hunting by the local people were restricted.(iii) In this process, many pastoralists and nomadic communities lost their livelihoods. Some of them were forced to work in factories, mines and plantations in order to restrict them from entering into forest trade.

44) How did Indian labour suffer at the British hands in the plantations?

Answer:  (i) In Assam, both men and women from forest communities like Santhals and Gonds were recruited to work on tea plantations.(ii) Their wages were low and conditions of work were very bad, rough and tough.(iii) They could not return easily to their home villages, as they were kept as bonded labourers who were tied to their landlords.

45) What were the main causes of the revolt of Bastar?

Answer: (i) In 1905, the British put a stop on shifting cultivation, hunting and collection of forest produce, which affected the people of Bastar.(ii) Some of the villagers were allowed to stay in the Reserved forests on the condition that they would cut and transport trees and protect the forests from fire for forest department for free.(iii) People of other villages were displaced without any notice or compensation.(iv) Villagers had been suffering from increased land rents and demand for free labour by British officials.(v) The problems were added by the terrible famines of 1899-1900 and 1907-08. These conditions thus led to a revolt by the people of Bastar.