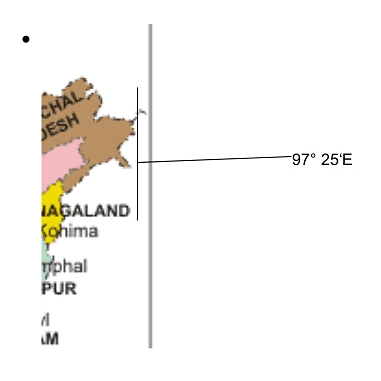 Fig: Easternmost longitude of India2) What is the longitude of the Westernmost point of India?Ans:Guhar Moti in Kutch district, near the Sir Creek in Gujarat state is at 6807' East longitude. 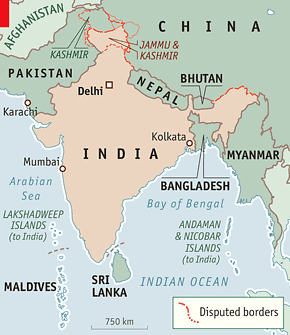 Fig: India's neighbouring countries5) If you go to Silvassa, which union territory will you be in?Ans:  You will be in the union territory of Dadra and Nagar Haveli, as Silvassa is its capital. 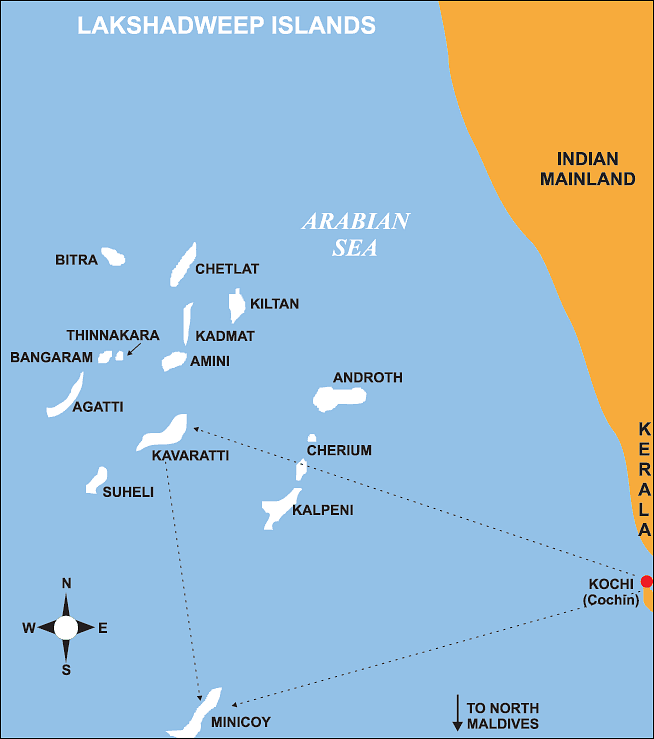 10) What is unique about the 'Indira Point'?Ans: Indira Point is the Southernmost point within the Indian Union, located in the Nicobar islands. It was submerged under sea water by the Tsunami of 2004.

11) Which countries are land neighbours of India, but are not considered as part of the Indian subcontinent?Ans: The countries are Myanmar, Afghanistan and China.

13) Which state of India has the least area?Ans: The state of Goa has an area of 3702 sq km, which is the least among all the states (Delhi is considered as a union territory, not a state). 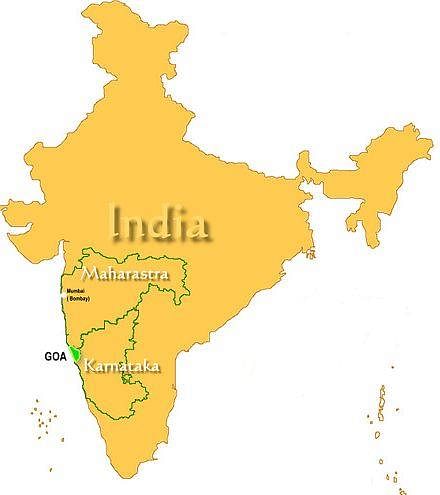 Fig: Location of Goa in India

18) India's contacts with the world were established first by land routes or sea routes?Ans:The land routes, because the various passes across the mountains in the North have provided passages to the ancient travellers, while the oceans restricted such interaction for a long time. 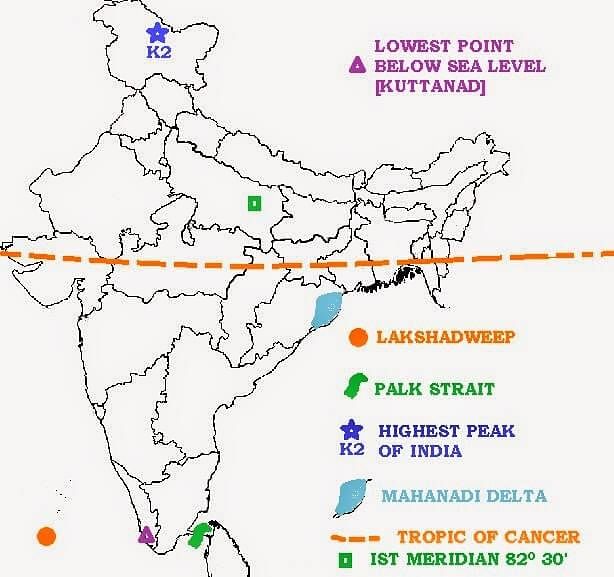 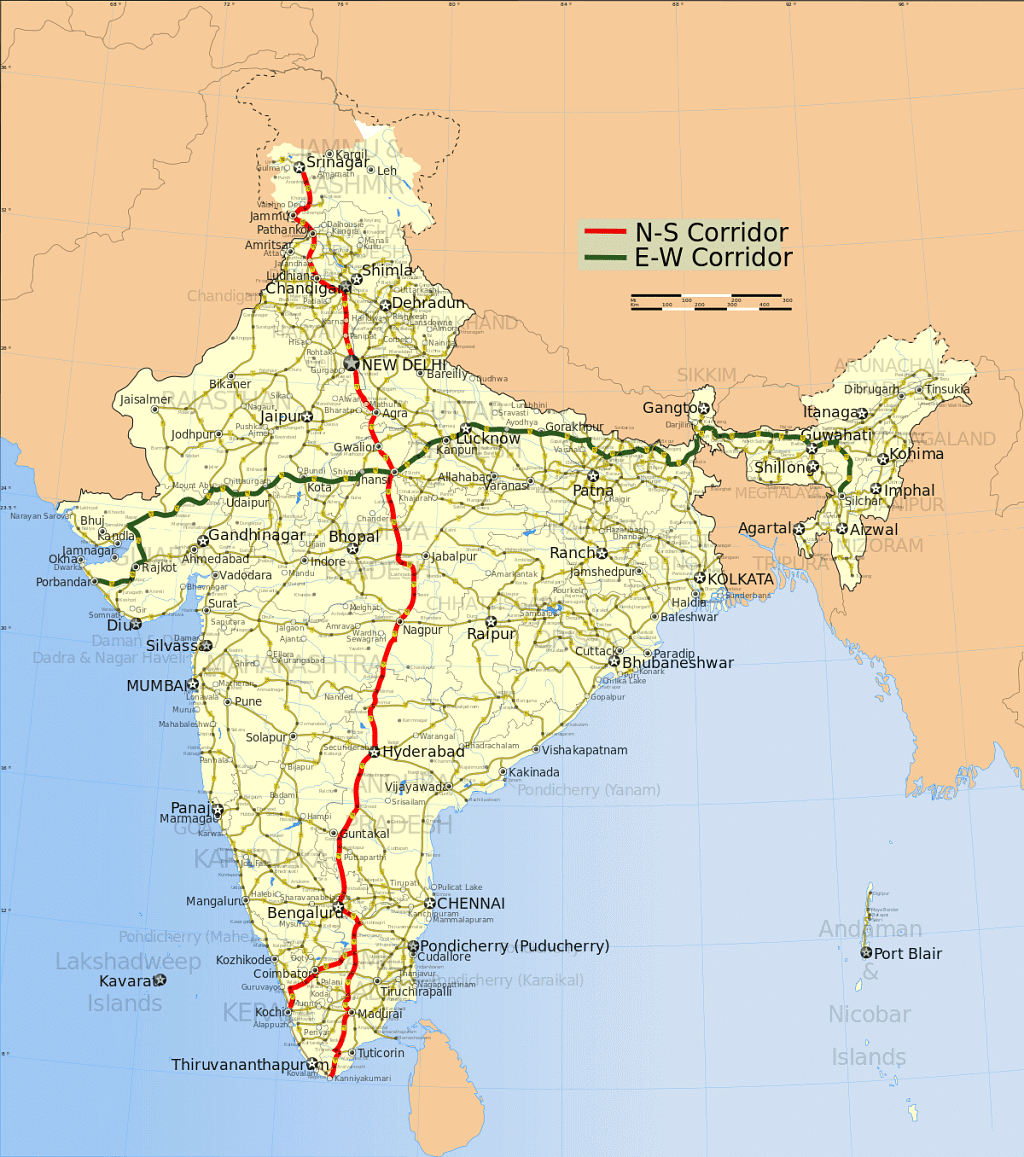 26) What is the position of India in respect of area in the world?Ans:  India holds 7th position in the world in term of area.

31) They are Russia, Canada, China, United States of America, Brazil and Australia.Ans:The distance of North-South extension of India in 3214 kms.

32) What is the North-South extension of India in kilometres ?Ans:The latitudinal line that divides India in two equal parts is Tropic of Cancer.

34) What is the time difference between 1ST and GMT?Ans:The days and nights are almost equal at Kanyakumari  because it lies near the equator

35) Why days and nights are almost of equal duration at Kanyakumari?Ans:Bangladesh shares the longest boundary with India. It is   4053 km long. 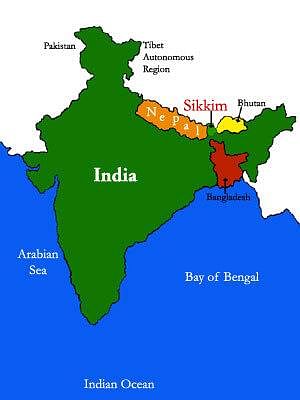 37) Just before independence, how were the Provinces and states in India organised?Ans:Just before independence in 1947, there were two types of states in India?the Provinces and the Princely states. Provinces were ruled directly by British officials who were appointed by the Viceroy. Princely states were ruled by local, hereditary rulers, who acknowledged sovereignty of the British in return for local autonomy. Examples of the rulers of Princely states are the Nizam of Hyderabad and Maharaja Hari Singh of Jammu and Kashmir.

Fig : Location of India in AsiaThe various passes across the mountains in the North have provided passages to the ancient travellers. These routes have contributed in the exchange of ideas and commodities since ancient times. Thus, India is very strategically located.

39) Give the reasons for selecting longitude 82°30' as the Standard Meridian of India.Ans:   The latitudinal and longitudinal extent of the Indian main land is about 30°. Thus, from Gujarat to Arunachal Pradesh, there is a time difference of almost two hours. So the local time along the Standard Meridian of India (82°30' E) passing through Mirzapur (in Uttar Pradesh) is taken as the Indian Standard Time for the whole country. This is near to the centre of the country and also an exact multiple of a half hour related to Greenwich in England, which is at 0° longitude.

40) Why is the difference between day and night durations not felt at Kanyakumari, but not so in Kashmir?Ans:Since, the axis of rotation of the Earth is tilted at 23.5° to the perpendicular, the circle of illumination of the Earth varies from summer to winter. At the equator, it does not cause any time difference between day and night throughout the year, but North or South of it the durations vary. Kanyakumari is close to the equator, while Kashmir is far away. So, this difference is felt in Kashmir in winter or summer, but not at Kanyakumari.

41)  Why 82030'E has been selected as the Standard Meridian of India ?Ans:From Gujarat to Arunachal Pradesh there is a time lag of two hours. Hence, time along the Standard Meridian of India (820 30' E) passing through Mirzapur (in Uttar Pradesh) is taken as the standard time for the whole country. Otherwise different regions of India would have different times, which would create problems; so, to have one common standard time for the whole country, this has been selected and called Indian Standard Time (1ST)

44) In India before 1947, there were two types of states in India?the Provinces and the Princely states. Provinces were ruled directly by British officials who were appointed by the viceroy. Princely states were ruled by local, hereditary rulers, who acknowledged British sovereignty in return for local autonomy. At the time of independence, the ruler of the Princely state of Jammu and Kashmir, Hari Singh, acceded to India and not to Pakistan, although the majority of population in the state was Muslim. If you had been in place of the ruler, what would you have done and why?Ans: I would have still acceded to India, as Pakistan is not a secular country, whereas India is a secular country. Since, there are a significant number of the people of Jammu and Kashmir who are not Muslims, they would have been persecuted if the state acceded to Pakistan. In India, people of all religions and faiths are treated equally and so the ruler's decision was a wise one.