The document Extra Question & Answers (Part 2): Socialism in Europe and the Russian Revolution Notes | Study Social Studies (SST) Class 9 - Class 9 is a part of the Class 9 Course Social Studies (SST) Class 9.
All you need of Class 9 at this link: Class 9
1) After 1905, which elected representative body was formed in Russia?Ans: The elected representative body formed in Russia after 1905 was the Duma.

5) How did the revolutionaries originate in the year 1815?Ans: Some nationalists, liberals and radicals wanted revolutions to put an end to the kind of governments established in Europe in 1815. In France, Italy, Germany and Russia, they became revolutionaries and worked to overthrow existing monarchs.

6) Name the international body which formed in 1889 to coordinate the efforts of socialists all over Europe.Ans:  This organisation was known as the Second International.

7) Explain the term Conservatives.Ans: The Conservatives were opposed to any change, i.e. they were opposed to radicals and liberals. By the 19th century, however, they accepted that some change was inevitable, but believed that the past had to be respected and change had to be brought about through a slow process.

8) What was the boundary of the Russian empire during 1914?Ans: In 1914, besides the territory around Moscow, the Russian empire included current day Finland, Latvia, Lithuania, Estonia, parts of Poland, Ukraine and Belarus, Georgia, Armenia and Azerbaijan. 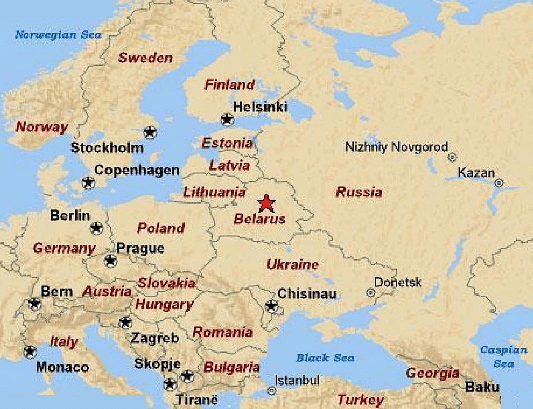 Fig. Russia and its territories

18) Point out the main features of 19th century Europe.Ans: It was a time of profound social and economic changes in 19th century Europe, when new cities came up and new industrialised regions developed, railways expanded and the Industrial Revolution occurred. 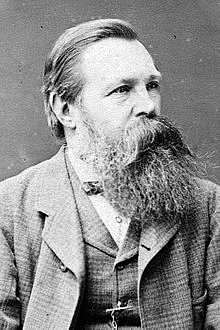 21) Explain the role of Alexander Kerenskii in the Russian Revolution.Ans:  He became second Prime Minister of the provisional government formed after the February Revolution.

22) What was 'Cheka' in Russia after the revolution?Ans: The Russian Secret Police under Bolshevik rule was referred to by the name 'Cheka'.

23) Mention the objective of the women's suffragette movement.Ans: Its objective was to get the right to vote for women.

24) The event 'Bloody Sunday' was later on called by what name?Ans: It was called as the 1905 Revolution.

32) Mention the other name of commune in Russia.Ans: In Russia the commune of farmers was known as 'Mir'.

34) In the context of Russia what was 'Kolkhoz?Ans: Kolkhoz was collective farm in Russia.

36) Who were the socialists in 19th century Europe? What kind of society did they envisage?Ans: Socialists were against private property and saw it as a root of all social evils. They believed in the idea of cooperatives. In cooperatives people made associations and produced goods together. The profits of the business were divided among all members of the association. However, different socialists had different views regarding how the cooperatives were to be built. Robert Owen, one of the founders of socialism, suggested that cooperatives be built on individual initiative. Other socialists like Louis Blanc wanted the government to encourage cooperatives and replace capitalist enterprises.

37) What was Bloody Sunday? Or Describe the incident known as 'Bloody Sunday'? State any two events after the Bloody Sunday which led to the revolution of 1905 in Russia.Ans: On Sunday, 22nd January, 1905, the workers of Russia, led by Father Gapon, reached the winter palace of the Tsar to present a petition. But they were fired at indiscriminately by police and the cossacks resulting in the death of more than 100 workers with 300 workers wounded. This started a series of events that became known as the 1905 revolution. This incident is known as 'Bloody Sunday' in Russian history.(i) The news provoked unprecedented disturbances throughout Russia. Strike took place all over the country.(ii) The Universities of Russia were closed down when student bodies staged walkouts, complaining about the lack of civil liberties.(iii) Lawyers, doctors, engineers, middle class workers established Union of Unions and demanded a constituent assembly. 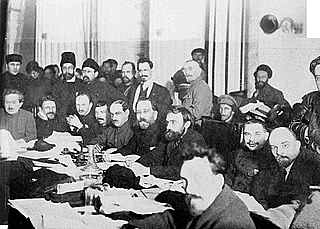 Fig. BolsheviksBolshevism was born at the second congress of the Russian Social Democratic Labour Party (RSDLP) in 1903. Bolsheviks were the majority group of workers of Russia. They believed in revolutionary methods for bringing about changes in society and the state. After the October Revolution, Russia became a one-parry state, i.e., the Bolshevik Party, which was renamed as the Russian Communist Party (Bolshevik). They changed the whole structure of Russia and Russian Society.

Fig. Leaders of MensheviksMensheviks were the minority group of the workers of Russia. They believed in parliamentary methods and participation in elections. They thought that the party should be open to all. They favoured parties as were existing in France and Germany, which took part in elections to the legislatures. Whereas the Bolsheviks argued that the working class should lead the revolution in alliance with the peasantry, the Mensheviks envisaged its being led by the bourgeoisie and favoured alliances with the liberals.

40) What was Paris Commune?Ans: There was a popular uprising in Paris between March and May, 1871. In March, 1871, elections were held in Paris to elect 90 members to serve as the Government of the Commune. The Paris Commune declared that its main purpose was to end exploitation of workers and monopolies. From this commune the concept of 'Dictatorship of the Proletariat' emerged. The French Government crushed this uprising ruthlessly. The uprising ended in May 1871. 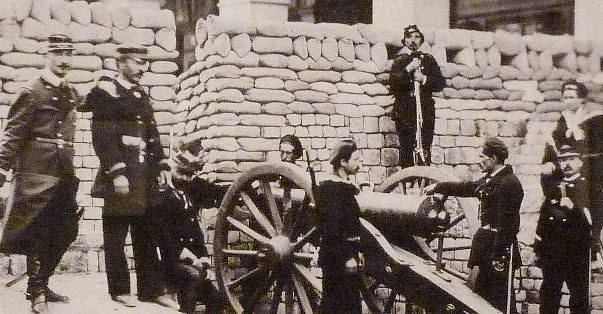 41) What was the Duma? How far was it successful?Ans: The Tsar of Russia allowed the creation of an elected consultative Parliament which was known as Duma. Duma had representatives from the third estate. The Tsar dismissed the first Duma within 75 days and the re-elected a second Duma within three months. He did not want any questioning of his authority. He changed the voting laws and packed the third Duma with conservative politicians.In Russia, the 'reds' meant Bolsheviks, the 'greens' meant socialist revolutionaries and the 'whites' meant pro-Tsarists. The Bolsheviks were the majority group of workers under the leadership of Lenin. During 1918 and 1919, the 'greens' (Socialist Revolutionaries) and the 'whites' (pro-Tsarists) controlled most of the Russian empire. They were backed by French, American, British and Japanese troops who were opposed to the growth of socialism in Russia.

42) What do you mean by the 'reds', 'greens' and 'whites' in the context of Russia?Ans: Lenin's New Economic Policy, promulgated by decree on 21st March, 1921, was a temporary retreat from full socialism to partial capitalism for the purpose of rebuilding Russia's economy. It permitted small businesses to make personal profits, while the state continued to control banks, foreign trade and large industries. Elements of capitalism such as individual profit and private ownership of land were permitted in order to revitalise the Russian economy.

43) Explain the New Economic Policy of Lenin.Ans: (i) Capitalists are owners of the industries in which they have invested capital. They believe in private property and a class based society. Socialists think that all property and means of production should be socially controlled. They believe in a classless society.(ii) Capitalists believe that the profit should be enjoyed by the owners of the industry. Socialists believe that the profits are the result of the workers 's labour, so the workers deserve to share it.

44) List two differences between the capitalist and socialist ideas of private property.Ans: The Bolsheviks controlled most of the former Russian empire by January 1920. People in Central Asia responded positively and with enthusiasm to the February Revolution of 1917 because the revolution freed them from the oppression of the Tsar's regime and strengthened their hopes for autonomy. But they responded with fear to the October Revolution of 1917, because the autocracy of the Tsar was replaced by the autocracy of Bolsheviks. In Khiva in central Asia, Bolshevik colonists brutally massacred local nationalists in the name of defending socialism. In this situation, people in central Asia were confused about the real nature of the Bolshevik Government.

45) Why did people in Central Asia respond to the Russian Revolution in different ways?Ans: Although the liberals argued for a representative, elected parliamentary government, but they were not 'democrats' because(i) they did not believe in universal adult franchise, i.e., the right of every citizen to vote.(ii) they felt men of property mainly should have the right to vote.(iii) they were not in favour of women suffrage.

46) 'Liberals of European states were not democratic'. Justify the statement by giving three examples.Ans: Karl Marx's theories were central to the party ideology of Lenin's Bolsheviks and had a key role to play in 1917 revolution and the establishment of the Russian communist state. Marx believed that all historical changes was caused by a series of class struggles between the bourgeoisie 'haves' and the proletariat 'have nots'. Vladimir Lenin was majorly influenced by Marx's writings. Karl Marx said that industrial society was capitalist under which workers did not get their share properly. He wanted the whole society to have the common control over the means of productions i.e., all production units should be nationalised. He thought that capitalism could be voted out only through revolution. Marx's idea deeply influenced Lenin and the Bolshevik Revolution and they followed it whole heartedly.

47) What was the contribution of Karl Marx in beginning about the Russian Revolution of 1917?Ans: 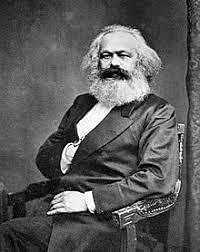 Fig. Karl Marx The First World War had a severe impact on Russian industry.(i) Russia's own industries were few in numbers and the country was also cut off from other suppliers of industrial goods by German control of the Baltic sea.(ii) Industrial equipment disintegrated more rapidly in Russia than any other country in Europe.(iii) By 1916, railway lines began to breakdown.(iv) Able-bodied men were called up to the war and as a result there were labour shortages and small workshops producing essentials were shut down.(v) Large supplies of grains were sent to feed army, bread and flour became scarce and riots at bread shop became common incident.

49) Describe the conditions of the workers under Tsar in Russia?

Describe any three points regarding the condition of workers in Russia in the beginning of the 20th century. Or Explain the condition of workers in Russia before 1917.Ans: In Russia, the nobility, the crown and Orthodox Church owned large landed properties.(i) Unlike the peasants of France, the Russian peasants did not have any respect for the nobles.(ii) In Russia, the peasants wanted the land of the nobles and sometimes they refused to pay rent. Even the peasants murdered the landlords.(iii) In 1902, peasant agitation occurred on a large scale in South Russia and in 1905 it spread all over Russia.(iv) Russian peasants were different from the other European peasants. Sometimes they pooled their land together.(v) Peasants established commune (mir) which divided the land according to the needs of the individual family.

50) Discuss the relationship between peasants and nobles in Russia during early 19th century.Ans: At the beginning of the 20th century, the Russian people were mainly agriculturists. About 85 per cent of the Russian population was agriculturists which is higher than other European countries.(i) Industry in Russia was developed in some pockets like St Petersburg and Moscow. Large factories existed alongside craft workshops.(ii) Many factories were setup in the 1890s. The reason behind it was the extension of railway network and the increase of foreign investment.(iii) Coal production doubled and iron and steel output quadrupled at that time.(iv) Most industries were owned by industrialist, but government supervised the wage scale and timing of the factories.