The document Extra Question & Answers (Part - 1) - The Story of Palampur Class 9 Notes | EduRev is a part of the Class 9 Course Social Studies (SST) Class 9.
All you need of Class 9 at this link: Class 9

Q.1. Which crop out of sugarcane, bajra or wheat are kharif crops?Ans. Bajra is a rapid growing warm weather crop suitable for areas with 40 to 75 cm of annual rainfall.

Fig: BajraThus, it is suitable for the kharif season, which is between July and October. Wheat is not suitable for warm weather and sugarcane requires a full year to grow.

Q.8. When large and medium farmers sell their surplus produce in the market, what are the purposes to which they use this income?Ans. A part of the earnings is saved and kept as capital for the next season. Thus, they are able to arrange for the capital for farming from their own savings. Some farmers also use the savings to buy cattle, trucks or use it in other non-agricultural activities. 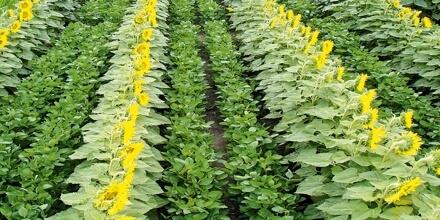 Q.13. What is the disadvantage in using chemical fertilizers in modern farming methods?Ans. The chemicals kill bacteria and microbes, which are essential for soil fertility.

Q.14. Which farmers out of landless farmers, small farmers or medium and large farmers, hire labor to work in the fields?Ans. Landless farmers are hired as laborers are hired. Small farmers do not need additional labor, as they work with their family members in the fields. Only the medium and large farmers have extensive work, which makes them hire additional labor.

Q.17. What is the major reason for people to migrate from rural areas to urban areas?Ans. They migrate in search of better employment opportunities. Q.22. Which items out of a tractor, clay, HYV seeds or a truck will be considered as fixed capital for non-farm activities?Ans. Only a truck is not used in non-farming activity and it is a fixed capital to be used again and again for transportation of goods.

Q.24. Can we consider rainfall as a source of irrigation?Ans. No, because irrigation implies provision of water to crops artificially, whereas rainfall is natural.

Q.29. What are 'Bigha' and 'Guintha'?Ans. Bigha and Guintha are the measuring units of land area in villages. Q.35. List the changes in Palampur due to the advent of electric power in the village.Ans. The advent of electric power in Palampur has brought about the following changes:(i) Irrigation is now done through electric run tube wells, which has reduced the dependence of the farmers upon rainfall and enables larger areas of land to be irrigated.(ii) Irrigation improvement allowed farmers to grow three different crops in a year.(iii) It enabled Mishrilal to set up a sugarcane crushing machine so that he can sell jaggery manufactured by him to the traders at Shahpur.

Q.36. The farm laborers in Palampur usually earn less than the minimum wage. Why?Ans. The use of modem agricultural implements like tractors, threshers and harvesters by the large and medium farmers has reduced the amount of agricultural labor required. So, there is competition for work among the agricultural laborers in the village. Knowing that the supply is much more than the demand, the laborers themselves agree to work for wages that are lower than minimum wages. The farmers exploit this condition of excess labor supply and force laborers to work for low wages.

Q.37. What is the difference between multiple cropping and modern farming method?Ans. Multiple Cropping: To grow more than one crop on a piece of land during the year is known as multiple cropping. It is the most common way of increasing production on a given piece of land. Modern Farming Method The farmers of Punjab, Haryana and Western Uttar Pradesh use HYV seeds, tube wells for irrigation, chemical fertilizers and pesticides, as well as machinery like tractors and threshers to increase the production. All these measures comprise what are known as modern farming methods.

Q.38. Why are farm laborers like Dala and Ramkali poor?Ans.
(i) Dala and Ramkali are landless farm laborers who work on daily wages in Palampur.(ii) The minimum wages for farm laborer set by the government is 115 per day, they get only 80.(iii) There is heavy competition for work among the farm laborers in Palampur, so people agree to work for lower wages.(iv) They remain out of work for most parts of the year and have to take loans from the moneylender to fulfill their needs. Due to this seasonal unemployment, they remain poor and are unable to repay the loan and fall into a debt trap.

Q.39. Gosaipur and Majauli are two villages in North Bihar. Out of a total of 850 households in the two villages, there are more than 250 men who are employed in rural Punjab and Haryana or in Delhi, Mumbai, Surat, Hyderabad or Nagpur. Such migration is common in most villages across in India. Why do people migrate? Can you describe based on your imagination the work that the migrants of Gosaipur and Majauli might do at the place of destination?Ans. Mostly people migrate in search of employment or better job opportunities to the cities like Mumbai, Delhi, etc or to the prosperous agricultural regions like Punjab and Haryana to work as farm laborers.(i) This migration usually takes place when a person is unemployed or in extreme poverty, which may be due to lack of land, displacement, negative impact of natural  disasters like drought or floods, etc.(ii) The migrants from Gosaipur and Majauli who went to cities will probably find work as casual laborers, industrial workers, street hawkers, rickshaw pullers, headload workers or as servants in homes and hotels, etc.(iii) Those who went to rural areas of Punjab and Haryana will probably work as farm laborers since agriculture is the main occupation of the rural people in these states.

Q.40. In what way is Kareem's capital and labor different from Mishrilal ?Ans. Both have fixed capital in the form of machines, but Kareem has a larger fixed capital because he has asset in the form of computers which are more expensive than the sugarcane crushing machine. Kareem has also employed educated and qualified computer teachers, whereas Mishrilal's labour is mainly unskilled labor.

Q.44. How did the spread of electricity help farmers in Palampur?Ans.
(i) Most of the houses in Palampur have electric connections.
(ii) Electricity powers all the tube wells in the fields that help to irrigate much larger areas of land more effectively as compared to the traditional Persian wheel drawn by bullocks. Since the entire cultivated area of 200 hectares had come under irrigation farmers did not have to depend on rainfall and could grow multiple crops.
(iii) It helps small businesses run their machinery like Mishrilal's sugarcane crushing machine.

Q.46. In your region, talk to two laborers Choose either farm laborers or laborers working at construction sites. What wages do they get? Are they paid in cash or kind? Do they get work regularly? Are they in debt?Ans.
(i) In our region, there are two labourers namely Ram Khilawan and Basanti, who are husband and wife working as casual constructing labourers. Due to drought, they had to leave their village in search of employment. They get approximately 50 to 60 rupees per day which they are paid in cash.
(ii) They do not get work regularly because there are a large number of workers seeking employment, due to which they agree to work for low wages. Because of irregular work and low wages they are unable to fulfill their needs and are in debt.

Q.47. "Dala is a landless farm laborer who works on daily wages in Palampur. The minimum wages for a farm laborer set by the government is 115 per day, but Dala gets only 80. There is heavy competition for work among the farm laborers in Palampur so people agree to work for lower wages." Here Dala is being exploited by the large farmer due to competition among the laborers. What principle is the large farmer violating? How can this malpractice be correctedAns. In this case the principle of minimum wage to be paid to the laborer is being violated by the big farmers. This malpractice can only be controlled by the local authorities who can check the exploitation of landless laborers like Dala in the hands of large farmers.