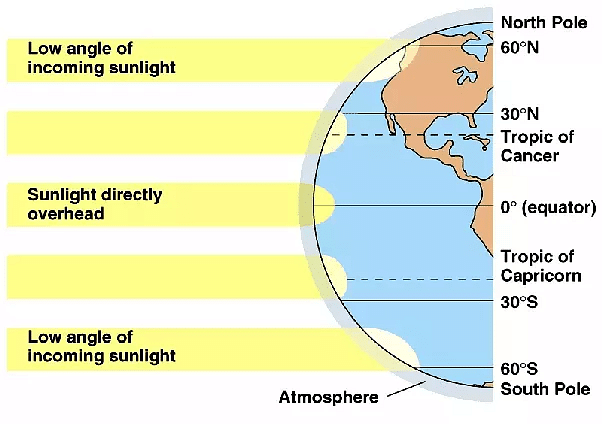 48) Why is India called a subcontinent? Name the countries which form a part of Indian subcontinent?Ans: A subcontinent is a big geographical unit that have different geographical features than rest of the continent. The Indian subcontinent exhibits such features in the continent of Asia.(i) It covers 2.4 per cent of the Earths total land area. It has long land frontier that is about 15200 km and nearly 7500 km long coastline.(ii)Its natural frontiers like Himalayas in North and Deccan Peninsula provides it a unique identity on the globe.(iii) Its longitudinal and latitudinal extent is 300. The Himalayas separate it from rest of Asia. It enjoys unique climate, natural vegetation and culture. The Indian subcontinent comprises of India, Pakistan, Bangladesh, Nepal and Bhutan.

51) What influence did the land routes to India have on cultural exchanges in ancient times?Ans: India's contacts with the world have continued through the ages, but her relationships through the land routes are much older than her maritime contacts. The various passes across the mountains in the North have provided passages to the ancient travellers, while the oceans restricted such interaction for a long time. These routes have contributed in the exchange of ideas and commodities since ancient times. The ideas of the Upanishads and the Ramayana, the stories of panchtantra the Indian numerals and the decimal system. The spices, muslin and other merchandise were taken from India to different countries.

54) Describe the location and size of India in three points each.Ans: Location (i) India is the 7th largest country in the world which lies entirely in Northern hemisphere.(ii) The main land extends between latitudes 804' N and 3706' N and longitudes 6807' E and 97025' E.(iii) The tropic of cancer (23030' N) divides the country into almost two equal parts.Size (i) The landmass of India has an area of 3.28 million sq km.(ii) India's total area accounts for about 2.4 per cent of the total geographical area of the world.(iii)India has a land boundary of about 15200 km and the total length of coastline is 7516.6 km.

55) What is the longitudinal extent of India? What is its implication?Ans:The longitudinal extent of India is from 680 7'E to 97025' E. The Earth rotates from West to East. So, the Sun appears to move from East to West. There is a corresponding time difference of one hour for every 150 of longitudinal difference. Due to this there is local time variation of almost two hours between extreme Eastern and Western part of India. Due to this time variation one uniform Standard Meridian (82030') has been chosen for India, so that every place in India should have one standard time, that is known as Indian Standard Time (IST).

56) India has a long coastline which is advantageous. Explain.Ans:No other country has a long coastline on the Indian Ocean as India has and indeed it has provided a significant boost to India's maritime trade. Almost 90 per cent of India's international trade is done through sea. The Deccan Peninsula protrudes into the Indian Ocean, thus helping India to establish close contact with West Asia, Africa and Europe from the Western coast and with South-East Asia and East Asia from the Eastern coast. India's central location at the head of the Indian Ocean and its long coastline have much helped in its interaction through sea. The sea routes passing through the Indian Ocean provides easy connectivity to India with the West and the East. India has developed many ports on its Western and Eastern coast like Mumbai, Chennai, Kochi, Visakhapatnam, etc which have become major centres for international business.

57) How did India's contact with rest of the world contribute in the exchange of ideas and commodities? Explain.Ans: India has a long history of international ties. Despite living with in natural frontiers, Indian society has not developed in isolation. It has influenced the rest of the world and in return has also been influenced by the rest of the world. India's contact with the outside world was much before the sea routes. The various passes across the Himalayas has provided gateway to many ancient travellers.  While   Ocean   restricted  such interaction. These routes have contributed in exchange of ideas and commodities since ancient times. Due to unique position in Asia, the ancient land routes, including famous 'Silk Route' passed through the Indian subcontinent. The ideas of the Upanishads, the Ramayana, the Gita and other Indian scriptures were known to the world in older ages. The Indian numerals as well as decimal system long back crossed the border. The Arabs took these ideas to the West. India's silk, spices, handicrafts, muslin and other merchandise were taken from India to different countries. The Greek enriched the Indian culture with their contribution in the field of architecture, science, etc. Islamic influence (from West Asia) is clearly visible in architectural styles of domes, arch, minarets, etc.

58) India said to enjoy a strategic position with reference to the International Trade Route. In your view which features provide India a strategic advantage?Ans:India occupies a unique position on the globe. It enjoys a unique proximity with Europe, Africa and Australia. The Indian landmass has a central location between East and West Asia. India is Southward extension of Asia thus it forms the South-Central Peninsula of world largest continent. The Deccan Peninsula, India's Southward extension protrudes into Indian Ocean and divides it into two seas, the Arabian sea on the West and the Bay of Bengal on its East. The Deccan Peninsula helps India to establish easy contact with West Asia, East Africa and Europe from Western coast also establishes contacts with South-East Asia, East Asia and Australia from Eastern coast. India has the longest coastline in Indian Ocean. These geographical features provides India a significant edge in International trade. Lakshadweep, Puducherry and Delhi.

69) Which island group of India lies to its South-East?Ans: Andaman and Nicobar islands lie to the South-East of India.

71) (a) Two features are shown on the political outline map of India. Identify these features and write their names on the lines marked on the map. (i) A state with a large tribal population (ii) This state became part of India in 1961 (b) On the map, locate and label the following with appropriate symbols. 1. A state in the Eastern region of India bordering three countries, but not bordering China. 2. The Union Territory bordering both Gujarat and Maharashtra. 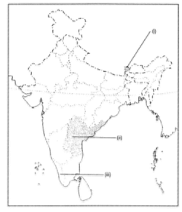 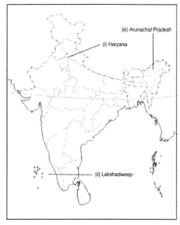