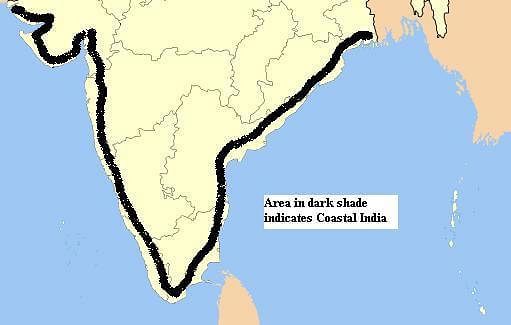 Fig: coastal strip Features of Western coastal strip are(i) It lies between the Western Ghats and Arabian sea.(ii)It is a narrow plain. It has three sections.(iii) The Northern part of the coast is known as Konkan.(iv) The central stretch of this coastal strip is known as Kannad Plain while Southern stretch is known as the Malabar coast.

52) Name the group of Indian islands that is of coral origin. Mention its capital and the island in the group that has a bird sanctuary. Or Which group of island is located in Arabian sea? Write any four features of these islands. What is orographic rainfall? Which part of the Peninsular plateau causes orographic rainfall? Answer:  (i) The Lakshadweep group of islands in the Arabian sea is of coral origin. It is composed of coral deposits on the sea bed.(ii) Kavaratti Island is the capital of the Lakshadweep.(iii) The Pitti Island, which is uninhabited, has a bird sanctuary.(iv) They are in proximity with Malabar coast in Kerala.(v) It has great diversity of flora and fauna.

53) Compare the actions of converging and diverging tectonic plates.Answer: 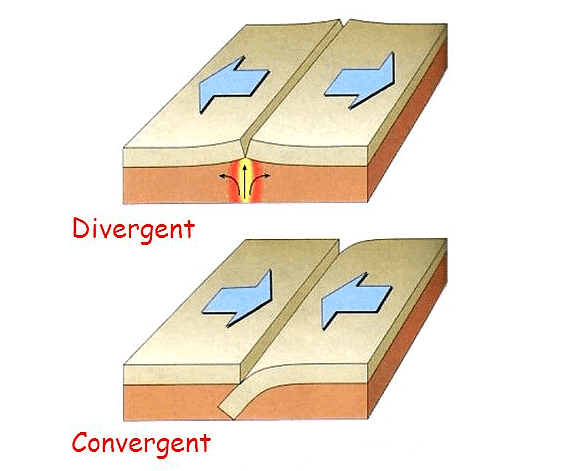 Fig: convergent and divergent platesWhen two tectonic plates converge, the crust is destroyed and recycled back into the interior of the Earth as one plate dives under another. Mountains and volcanoes are often found where plates converge. The Himalayas were formed due to the converging of the Eurasian plate with the Indo-Australian plate. At divergent boundaries, new crust is created as two plates pull away from each other. Oceans are born and grow wider where plates diverge or pull apart. When a diverging boundary occurs on land, a 'rift' will arise and the mass of land will break apart into distinct land masses. A divergent boundary between the North American and Eurasian plates has caused a ridge in the middle of the Atlantic Ocean.

55) Describe the river systems of the Northern plains, giving their main features.Answer: The three river systems in the Northern plains from East to West are the Brahmaputra, Ganga and Indus systems. A large part of the Indus system lies in Pakistan. The Indus and its tributaries - Jhelum, Chenab, Ravi, Beas and Satluj originate in the Himalayas. This section of the plain is dominated by the doabs. The Ganga plain extends between the Ghaggar and Tista rivers. It spreads over the states of Haryana, Delhi, Uttar Pradesh, Bihar, part of Jharkhand and West Bengal. It has tributaries like the Yamuna, Gomati, Ghaghara, Son, Gandak and Kosi. The Brahmaputra Plain lies in Arunachal Pradesh and Asom, where it is joined by its tributaries like the Dibang, Lohit, Raidak and Sankosh.

56) Describe the coastal plains, giving their main features. Or Describe any five features of coastal plains of India.Answer: The coastal plains are narrow coastal strips running along the Arabian sea in the West and the Bay of Bengal in the East. They are separated from the Deccan plateau by the Western and Eastern Ghats respectively. The plain in the West has three parts, Konkan in the North, Kannad in the centre and Malabar in the South. On the eastern side, we have the Northern circars in the north and the coromandel coast in the south. The Western plain is narrower in width (about 50 km) compared to the Eastern plain (100 to 130 km). The Mahanadi, Godavari, Krishna and Kaveri rivers form deltas on the East coast, while the Narmada and Tapi form estuaries on the West coast.

Fig: Islands of India India has the Union Territories of Lakshadweep in the Arabian sea and the Andaman and Nicobar islands in the Bay of Bengal. Lakshadweep is a group of coral islands near the Malabar coast of Kerala. The Pitti island here has a bird sanctuary. The total land area of this group is only about 32 square km. The Andaman and Nicobar islands are an elongated chain with dense forests and an equatorial climate. This chain has the only active volcano in India on Barren island. The Southernmost point of the Indian Union, Indira Point, at the end of the Nicobar chain, was sunk due to the Tsunami of December, 2004. The total land area of this chain is 8249 square km.

59) Which are the major physiographic divisions of India? Contrast the relief of the Himalayan region with that of the Peninsular plateau.

Answer:  The major physiographic divisions of India are(i) The Himalayan Mountains(ii) The Northern Plains(iii) The Peninsular Plateau(iv) The Indian Desert(v) The Coastal Plains(vi) The Islands Contrast between the Himalayan region and  the Peninsular plateau

60) Describe how the Himalayas were formed.

Answer : (a) The oldest landmass of India (peninsular part) was a part of Gondwana land.(b) Gondwana land included India, Australia, Africa and South America as one single landmass. 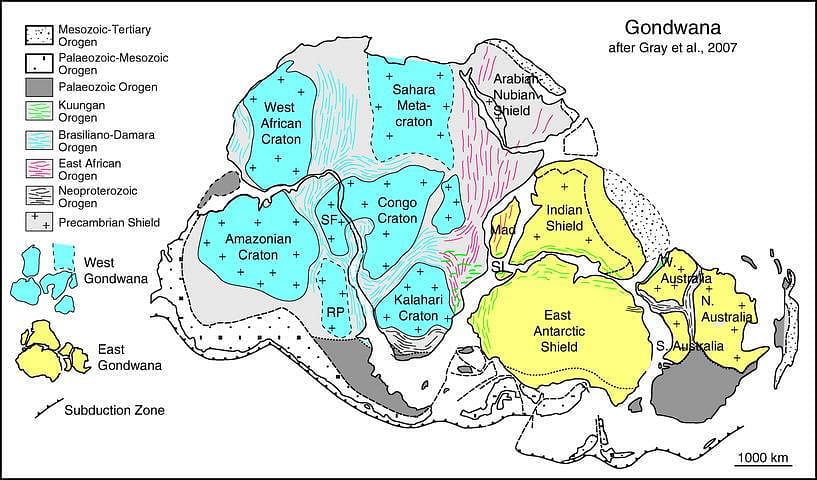 Fig: Gondwana land(c) Convectional currents split the crust into a number of pieces, thereby leading to the drifting of the Indo-Australian plate after being separated from Gondwana land towards the North.(d) The Northward drift resulted in the collision of the plate with the much larger Eurasian plate.(e) Due to this collision the sedimentary rocks which were accumulated in the geosyncline known as the Tethys, were folded to form the mountain systems of West Asia and Himalayas.(f) The Himalayas represent a youthful topography with high peaks, deep valleys and fast flowing rivers.

Answer: (a) The Himalayan uplift out of the Tethys sea and subsidence of the Northern flank of the Peninsular plateau resulted in the formation of a large basin. In course of time, this depression gradually got filled with deposition of sediments from rivers flowing from the mountains in the North and led to formation of the fertile Northern plains.(b) They spread over an area of 7 lakh square km. The plains are about 2400 km long and 240-230 km broad.(c) It is a densely populated and an intensively cultivated area.(d) With its adequate water supply and favourable climate, it is agriculturally a very productive part of India.(e) The Northern plains are broadly divided into 3 sections.(f) The Western part of the Northern plains is called the Punjab plain, formed by the Indus and its tributaries.(g) The Ganga Plain extends between the Ghaggar and the Tista rivers, spread over the states of Haryana, Delhi, UP, Bihar and West Bengal.(h) The Brahmaputra plain lies to the East of the Ganga plains. It covers the areas of Asom and Arunachal Pradesh.

62) How are coral reefs formed? Name two examples of coral reefs. Or What are corals ? Name and describe the island which is of coral origin. Or Write a short note on 'corals'. 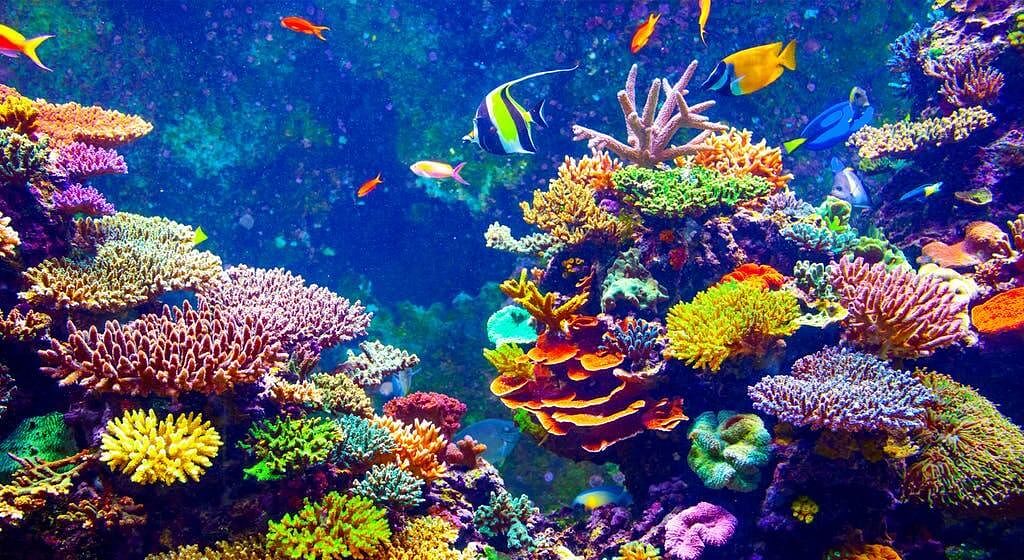 Fig: Coral reef They secrete calcium carbonate. The coral secretion and their skeleton form coral deposits in form of reefs.They are mainly of three kinds(i) Barrier reef(ii) Fringing reef(iii) Atolls The Great Barrier Reef of Australia is a perfect example of the first kind of coral reefs. Atolls are circular or horse shoe shaped coral reefs. In India, Lakshadweep island is of coral origin. It covers small area of 32 square km. Kavaratti island is the administrative head quarters of Lakshadweep. This island group has great diversity of flora and fauna. The Pitti island which is uninhabited has a bird sanctuary.

63) Name the two coastal strips that flank the Peninsular plateau. Distinguish the two by giving two characteristics of each.

Answer: The two coastal strips that flank the Peninsular plateau are(i) Western Coastal Strip(ii)Eastern Coastal StripWestern Coastal Strip(a) It is sandwiched between the Western Ghats and Arabian sea.(b) It is a narrow plain. It consists of three sections.(c) The Northern part of the coast is called Konkan coast, the central part is known as Kannad plain and Southern stretch is called the Malabar Coast.(d) The rivers flowing in this region are short and fast flowing. The major Westward flowing rivers are Narmada and Tapi.Eastern Coastal Strip (a) It lies between the Eastern Ghats and Bay of Bengal.(b) It is broader than Western coastal plain.(c) It consists of two main sections. In the Northern part, it is referred to as the Northern Circar. In Southern part it is known as Coromandel Coast.(d) The river flowing in this region are much larger and broader. The major rivers which make deltas are the Mahanadi, the Godavari, the Krishna and the Kaveri.

Answer: The Peninsular plateau is a table land composed of the old crystalline, igneous and metamorphic rocks. It was formed due to breaking and drifting of the Gondwana land and thus making it a part of oldest landmass. This plateau has broad and shallow valleys and rounded hills. The Peninsular plateau consist of two broad divisions, namely, the Central Highlands and the Deccan plateau.Central Highlands(i) The part of the Peninsular plateau lying to the North of the Narmada River covering a major area of the Malwa plateau is known as the Central Highlands.(ii) The Vindhyan range is bounded by the Central Highlands on the South and the Aravalis on the North-West. The Westward extension gradually merges with the sandy and rocky desert of Rajasthan.(iii) The flow of the rivers draining this region namely the Chambal, the Sind, the Betwa and Ken is from South-West to North-East, thus indicating the slope.(iv) The Central Highlands are wider in West, but narrower in the East.(v) The Eastward extensions of this plateau are locally known as the Bundelkhand and Baghelkhand. The Chhotanagpur plateau marks the further Eastward extensions drained by the Damodar river.Deecan Plateau : This triangular area lies South of the Narmada. The Satpura mountain range marks its broad boundary in North. The plateau is separated from the hills in the North-East by a geological fault. The hills are Garo, Khasi and Jaintia. The Western Ghats cause orographic rain by facing the rain bearing moist monsoon winds to rise along the Western slopes of Ghats. The parts of the plateau known as Deccan traps contains black soil of volcanic origin.

Answer:  (i) The important features of Ganga plain The Ganga plain or basin forms the middle part of the Northern plains of India. 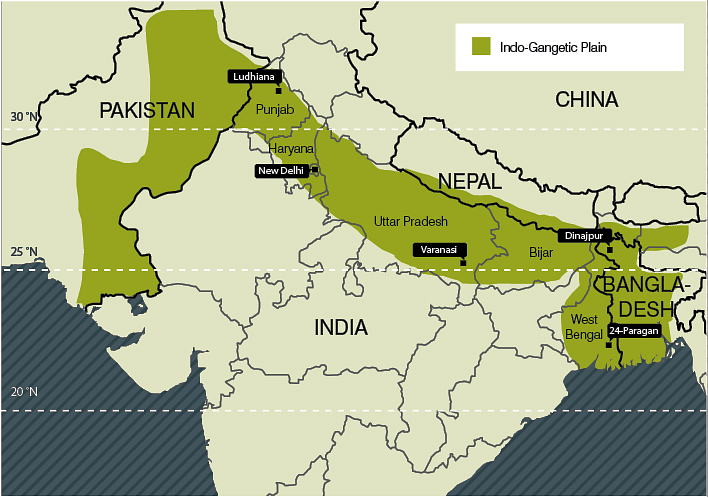 Fig: Ganga plain(ii) It extends between Ghaggar and Teesta rivers.(iii) It is spread over the states of North India, Haryana, Delhi, Uttar Pradesh, Bihar, partly Jharkhand and West Bengal to its East.(iv) The Ganga plain is drained mainly Eastward by the Ganga and its major tributaries such as the Yamuna, Ghaghara, Gandak, Kosi, Son, etc.(v)It slopes gently Eastwards and has highly fertile soils. It is agriculturally the most important region of India.(vi)It is highly populated and have some major cities on its river banks,