Q.51. What does 'yield' mean?Ans. Yield is measured as crop produced on a given piece of land during a single season. 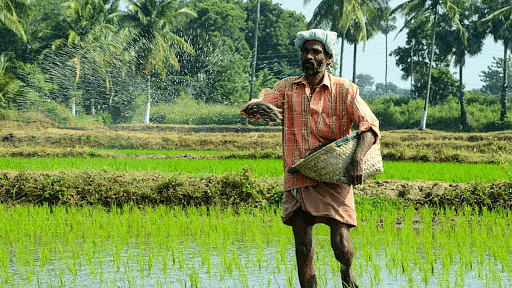 Q.53. How were higher yields of wheat and rice possible?Ans. Higher yields were possible only from a combination of HYV seeds, irrigation, chemical fertilizers, pesticides etc.

Q.55. How do chemical fertilizers affect the soil?Ans. Chemical fertilizers provide minerals which dissolve in water and are immediately available to plants. But these may not be retained in the soil for long. They may escape from the soil and pollute groundwater, rivers and lakes.

Q.56. Who are the farm laborers working for medium and large farmers?Ans. Farm laborers come either from landless families or families cultivating small plots of land. Unlike farmers, farm laborers do not have a right over the crops grown on the land, they are paid wages by the farmer.

Q.57. How do farm laborers get wages in Palampur?Ans. Wages can be in cash or kind (crop). Sometimes laborers get meals also. Wages vary widely from crop to crop, from one farm activity to another.

Q.59. From where small farmers borrow money?Ans. Small farmers either borrow from large farmers or the village moneylenders or the traders who supply various inputs for cultivation. The rate of interest on such loans is very high which makes it difficult for them to repay.

Q.61. What is the basic difference between two factors of production-land and capital?Ans. Land is a natural resource whereas money is man-made. It is possible to increase capital, whereas land is fixed.

Q.65. What kind of manufacturing units are set up in Palampur?Ans. Manufacturing in Palampur involves very simple production methods and is done on a small scale. It is carried out mostly at home or in the fields with the help of family labor.

Q.66. What kinds of shops are set up in Palampur?Ans. There are small general stores selling items like rice, wheat, sugar, tea, oil, biscuits, soaps, toothpaste, batteries, candles, notebooks, pens, pencils and even some clothes. There are shops for eatables too.

Q.67. Which means of transport are used by people of Palampur? Ans. There are rickshawallahs, tongawallahs, jeeps, tractors, trucks, bullock carts and bogeys to transport goods and people to nearby village and towns of Palampur.

Q.68. Name the main and other activities of the village of Palampur.Ans. Farming is the main activity in Palampur. Other activities are small -scale manufacturing, dairy, transport, etc. They also have small shops selling a wide range of items like rice, wheat, sugar, tea, oil, biscuits, soaps, etc.

Q.69. What all facilities are available in the village?Ans. Most of the houses have electric connections. Electricity is used to run tubewells in fields and for many other purposes. Palampur has two primary schools and one high school. There is a primary health centre run by the government and one private dispensary where the sick are treated. It also has a well-developed system of roads and transport facilities.

Q.70. What are the main factors for production of goods and services?Ans.(i) The first requirement is land and other natural resources like water, forests, minerals, etc.(ii) The second requirement is labor, i.e., the people who will do the work. Some activities require educated workers to perform the necessary task and other activities require workers who can do manual work.(iii) The third requirement is physical capital, i.e., the variety of inputs required at every stage during production. It includes fixed capital and working capital.(iv) Fourth requirement-knowledge and entrepreneur.

Q.71. State the various ways of growing more crop from the same land by the people of Palampur.Ans. To grow more than one crop on a piece of land during the year:(i) Modern farming methods like HYV seeds, pesticides, chemical fertilizers, etc. were used.(ii) Green Revolution in the late 1960s introduced to the farmers, the cultivation of wheat and rice by using high yielding variety seeds.

Q.73. State the main reasons why farmers are able to grow three different crops in a year in Palampur.Ans. The main reasons are:(i) A well-developed system of irrigation.(ii) Electricity came early to Palampur. It was perceived to help in transforming the system of irrigation as the earlier Persian wheels, till then, were used to draw water from wells to irrigate small fields.(iii) People noticed that electric-run tubewells could irrigate much large areas of land more effectively.

Q.74. What do you understand by the term 'Green Revolution'?Ans. The 'Green Revolution' was introduced in India, in the late 1960s. Indian farmers used it for the production of major food crops like wheat and rice. They made use of the High Yielding Variety seeds, which produced much greater yield than the traditional seeds. However, they needed plenty of water, chemical fertilizers and pesticides to produce best results.

Q.76. How did the spread of electricity help farmers in Palampur?Ans.(i) Electricity enabled the use of tubewells which improved the system of irrigation, leading to more yield, more income and further investment.(ii) Shops, sugarcane machines, small-scale industries and computer centers were introduced by the farmers to get supplement income.

Q.77. Is it important to increase the area under irrigation and why?Ans. More area under irrigation would lead to more yield or production to fulfill the needs of the population. More yield would fetch more income to the farmers. It would provide more employment opportunities for them. Their supplement income can provide them more capital for further investment in non-farm activities also.

Q.78. Why are the wages for farm laborers in Palampur less than the minimum wages?Ans.(i) Employment is less and farmers are more and therefore, farmers have to be content with what they were earning.(ii) Land is owned by landlords who desire to earn more and more profits by giving minimum wages.(iii) The farmers are illiterate and unaware of the minimum amount set by the government.

Q.79. Describe the work of a farmer with 1 hectare of land or small holding.Ans. The farmer with a small land of 1 hectare needs less capital to prepare his land. He uses traditional seeds, animals to plough, less labor, no machines, less chemical fertilizers or manure. He does irrigation manually and is helped by his family members to do the work of harvesting. The production from hectare of his land is consumed by his family.

Q.81. What can be done by the government to start more non-farm activities in the villages to improve the farmers' conditions?Ans.(i) The government should provide capital to the villagers for starting new business like shops, dairy farming, transport, etc.(ii) Banks should be set up in the villages to provide loans to the farmers at low interest rates.(iii) People should be made literate so that they are qualified to start a new business like computer training courses in computer centers.

Q.83. Explain the types of activities necessary for production.Ans.(i) Farming is the main activity for the production and sale of crops.(ii) Non-farm activities include small-scale manufacturing, transport, shopkeeping, dairy farms etc. These activities help in other productions needed in a village.(iii) There are people who do cattle-rearing to provide milk and getting surplus income for their families.

Q.84. What means of transportation are used in the village of Palampur?Ans. Many kinds of transport are used by the people of village of Palampur. They use bullock carts, tongas, rickshaws, bogeys and goods. They are also used for loading jaggery and other commodities to their neighboring farms like Raiganj. Motor vehicles like motorcycles, jeeps, tractors and trucks etc. are used to transport people with their surplus crops to sell it to their neighboring villages.

Q.85. What kind of people live in the village Palampur?Ans. This village has about 450 families belonging to several different castes. The 80 upper caste families own the majority of land in the village. Their houses, some of them quite large, are made of brick with cement plastering. The SCs (dalits) comprise one-third of the population and live in one corner of the village and in much smaller homes, some of which are of mud and straw.

Q.86. What are the ill-effects of Green Revolution?Ans. In many areas. Green Revolution is associated with the loss of soil fertility due to increased use of chemical fertilizers. Also, continuous use of groundwater for tubewell irrigation has reduced the water table below the ground. Environmental resources like soil fertility and groundwater are built up over many years. Once destroyed, it is very difficult to restore them.

Q.87. Describe the condition of landless farmer like Dala, of Palampur village. Ans. Dala is a landless farm laborer who works on daily wages in Palampur. This means he must regularly look for work. The minimum wages for a farm laborer set by the government is 115 per day, but Dala gets only 80. There is heavy competition for work among the farm laborers in Palampur. So, people agree to work for lower wages.

Q.88. How surplus farm products are sold by the farmers? Ans. Let us assume that farmers have produced wheat on their land. They retain a part of the wheat for the family consumption and sell the surplus wheat. Small farmers like Savita have little surplus wheat because their total production is small and from this a substantial share is kept for their own family needs. The medium and large farmers supply wheat to the market which the traders buy and sell it further to shopkeepers in the towns and cities.

Q.89. Define Physical Capital, Fixed Capital, Working Capital and Human Capital with examples.Ans.(i) Physical capital: Physical capital is the variety of inputs required at every stage during production. It includes fixed capital and working capital.(ii) Fixed capital: Tools and machines range from a plough to a tractor and sophisticated machines like generators, turbines, computers, etc. The tools, machines, buildings which can be used in production over many years are called fixed capital.(iii) Working capital: Production requires a variety of raw materials. It requires money to make payments and buy other necessary items. Raw materials and money in hand are called working capital. Unlike tools and machines, these are used up in production.For example: Yarn required by a weaver; clay used by a potter.(iv) Human capital: One needs knowledge and enterprise to be able to put together land, labor and physical capital and produce an output; either to use it by oneself or to sell in the market. This is known as human capital, which enables better production with human skill and knowledge.