101) How did this socialist party work in monarchy?Ans:  It had to operate as an illegal organisation. It set up a newspaper, mobilized Workers  and organised strikes.

102) What role was played by 'The Socialist Revolutionary Party' in 1900 Russia?Ans:This party struggled for peasants rights and demanded that land belonging to nobles be transferred to peasants.

103) Who were 'Bolsheviks'?Ans: It was a political organisation led by Lenin, who thought that in a repressive society like Tsarist Russia the party should be disciplined and should control the number and quality of its members. He believed in a socialist concept.

104) Who were Mensheviks?Ans: 'Mensheviks' also was a political organisation, who thought that party should be open to all and accept the democratic set up of the government.

105) What was the demand of workers of St. Petersberg in 1904?Ans: The workers went on strike demanding a reduction in the working day to eight hours, an increase in wages and improvement in working conditions.

106) Which incident was the immediate cause of 1905 Revolution in Russia?Ans: 'Bloody Sunday' was the incident, where over 100 workers were killed and above 300 wounded on a Sunday.

107) What was a 'Duma'?Ans: 'Duma' was a Parliament of elected consultative formed with the permission of Tsar after the success of 1905 Russian Revolution.

108) Name the leader who led procession of workers to winter palace.Ans: Father Gapon.

109) Name the countries that formed allied Powers in World War I.Ans: France, Britain and Russia. Later, Italy and Romania too joined them.

111) What was the new name of St. Petersburg?Ans: It was a German name, so it was changed to Petrograd, a Russian name.

114) Which buildings were located on the left bank of river Neva?Ans: On the left bank were the fashionable areas, the winter Palace and official buildings, including the Palace where the Duma met.

115) What is 'Soviet'?Ans: 'Soviet' was a council of soldiers and striking workers of Russia.

117) What was the result of February Revolution of 1917 in Russia?Ans: It brought down monarchy and Duma leaders and soviet leaders formed a provisional government.

118) What was Lenin's 'April Thesis'?Ans: The three demands of Lenin were called April Thesis. They were war to be closed, land to the tiller and banks to be nationalised.

119) What new name was given to 'Bolshevik Party'?Ans: Bolshevik Party renamed itself 'The Communist Party' to indicate its new radical aims. 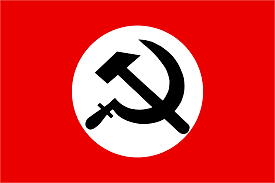 120) Who was the Prime Minister of Russia when October Revolution began?Ans: Kerensky.

121) Which secret police was formed to punish the one who criticised Bolsheviks?Ans: The secret police called 'Cheka' first and later OGPU and NKVD.

123) What was Centralised Planning?Ans: A process of centralised planning was introduced by Bolsheviks. In it the officials assessed how the economy could work and set targets for a five year period called 'Five Year Plans'.

124) How centralised planning led to economic growth?Ans: Industrial production increased by 100 percent in the case of oil, coal & steel and many new factory cities came into being.

125) Who was Stalin?Ans:Stalin was a close associate of Lenin and came to power in Russian after Lenin's death. He introduced firm emergency measures.

126) Who were 'kulaks'?Ans: It was the name given to the well-to-do peasants of Russia.

127) Why Kulaks needed to be eliminated?Ans: To develop modern forms and run them along industrial lives with machinery, it was necessary to eliminate Kulaks, take away land from peasants and establish state controlled large farms.

128) What does 'Kolkhoz' mean?Ans: These were collective farms. Peasants worked on this land and the profit is shared amongst them. Those who resisted collectivisation were severely punished.

129) What is Comintern? Ans: It is Communist International, a union of pro?Bolshevik Socialist parties.

130) Differentiate between the ideas of liberals, radicals and conservatives.Ans: (i) Liberals: They believed in changing the society. They wanted a nation which tolerated all religions. They wanted to safeguard the rights of individuals against government. However, they thought that only propertied men should have the right to vote. They also did not want women to vote.(ii) Radicals: In contrast, they believed in the rule of majority of the country's population. They opposed the privileges of the landowners and factory owners and supported women's right to vote.(iii) Conservatives: They opposed both the liberals and radicals. Earlier they opposed any kind of change but by the nineteenth century, they accepted the change but believed that the past has to be respected and change had to be brought through a slow process.

131) What was the socialist system?Ans: Socialists were against private property and felt it to be the root cause of all social ills. They felt that though property provided employment, it gave personal gains to property owners, not to the one who contributed to make the property productive. Socialists wanted that landowners should pay attention to collective interest, rather than their own personal interest.

133) How were socialist parties formed in various parts of the world?Ans: Workers in England and Germany began forming workers associations, for a better living and working conditions. In Germany, these associations worked closely with the 'Social Democratic Party' and helped it win the parliament seats. They set up funds to help members in times of distress. In 1905, socialists and trade unionists formed a 'Labour Party' in Britain and 'Socialist Party' in France.

134) What were the main causes of the 1905 Revolution?Ans: Main causes were:(i) Russia was an autocracy and its ruler was not subject to the parliament.(ii) Prices of essential goods rose rapidly and real wages declined by 20%.(iii) About 10,000 workers in St Petersburg went on a strike demanding a reduction in the working hours, increase in wages and improvement in the working conditions.(iv) Finally, the 'Bloody Sunday' incident at Winter Palace provoked the Russians to start the 1905 Revolution against the Tsar.

135) Who was father Gapon? Narrate the events leading to the 'Bloody Sunday' incident and the 1905 Revolution.Ans: Father Gapon was the leader of the procession of workers who marched towards the Winter Palace in St. Petersburg. Events:(i) When this procession of workers reached the Winter Palace, it was attacked by the police.(ii) Over a hundred workers were killed and about three hundred wounded.(iii) This incident known as the 'Bloody Sunday' started a series of events leading to the 1905 Revolution.(iv) Strikes took place, universities closed down and student bodies staged walkouts.(v) Lawyers, doctors and engineers and other middle class workers formed unions and demanded constituent assembly.

136) What was the Duma? How far was it successful?Ans: Duma was an elected legislative body like the parliament having representatives of the third estate. The Tsar dismissed the first Duma within 75 days and the re-elected Second Duma within three months. He did not want any restrictions or reductions in his powers. He changed the voting laws and packed the Third Duma with the conservative politicians and liberals and revolutionaries were out.

137) What was the impact of World War I on the Russian economy?Ans: Industrial equipment disintegrated more rapidly in Russia than any other European country. By 1916, railway lines began to break down and all able-bodied men were called up to the war. As a result, there were labour shortages and small workshops producing essential goods were shut down. Since more ration was sent for the army, there was shortage of bread for the civilians. By the winter of 1916, riots at bread shops were common.

138) What were the three major demands of the Bolsheviks?Ans: In April 1917, the Bolshevik leader, Lenin returned to Russia from exile. He and other Bolshevik leaders opposed the war. So he put forward three demands, called as Lenin's 'April Theses'.(i) The war to be brought to an end and Russia should withdraw itself from the war.(ii) Land to be transferred to the peasants, thus feudalism to be banned.(iii) Banks be nationalised.

139) How did the Mensheviks resist the protest of the Bolsheviks?Ans: In industries, committees were formed to question the industrialists about the way they ran the factories. Trade unions were formed and soldiers' committees were formed in the army. In June, about 500 Soviets sent representatives to an All Russian Congress of Soviets. As the Provisional Government saw the grip of the Bolsheviks becoming stronger, they decided to take stern measures against the spreading discontent.

140) What were the causes of the civil war between the Bolsheviks and the Russian army of the Non-Bolsheyik socialists?Ans: When Bolsheviks ordered land distribution, the Russian army began to break up. Non-Bolshevik socialists, liberals and supporters of autocracy condemned this. Their leaders moved to South Russia and organised troops to fight the Bolsheviks. These troops and Bolsheviks fought a civil war; and looting, banditry and famine became common.

141) What was the impact of Stalin's 'Reign of Terror'? Ans: There was criticism on the consequences of collectivisation of farms. Stalin and his supporters charged these critics with conspiracy against socialism. With the result, over two million people were either in prison or labour camps. A large number of them were forced to make false confessions under torture and were executed. Several punished people were talented professionally and were brought with false allegations

142) What social changes can be seen in society after industrialisation?Ans: (i) Industrialisation brought men, women and children to factories.(ii) Work hours were often long and wages were poor.(iii) Housing and sanitation problems were growing rapidly.(iv) Almost all industries were properties of individuals.(v) Many liberals and radicals themselves were often property owners and employers.(vi) So, it was the time when new cities came up and new industrial regions developed, railways expanded and the Industrial Revolution happened.

143) Who was Karl Marx? What was his theory of socialism?Ans: Karl Marx was a communist who introduced the concept of socialism. Karl Marx's Theory:(i) He felt that the industrial society belonged to the capitalists.(ii) Capitalists owned the capital invested in industries, but the profit was produced by workers.(iii) He believed that the condition of workers would never improve, as long as profit is taken by the capitalists.(iv) Marx believed that to free themselves from the capitalists' exploitation, workers had to form a socialist society where all property was socially controlled. This would be a communist society.

144) What were the main causes of the Russian Revolution?Ans: Main causes were:(i) Autocratic rule of Tsars: In 1914, the Russian emperor was Tsar Nicholas II. He fought a number of wars to expand his empire in the north and west in Europe. He has borne the expenditure of war by taxing the common people of Russia.(ii) Conditions of peasants: Majority of the Russians were agriculturalists. Major part of the land was owned by nobles and clergy and these peasants worked as farmers on daily wages. They were paid less and worked more and sometimes under debt, they were not even paid wages.(iii) Status of industries: Industry was found in pockets. Prominent industrial areas were St. Petersburg and Moscow. Craftsmen undertook much of the production, but large factories existed alongside crafts workshops. Foreign investment in industries increased with the extension of Russia's railway network.(iv) Conditions of workers in the industries: Most industries were owned by private industrialists. Though the government supervised factories' working hours and wages of the workers, but still rules were broken. Women workers were also paid less than men. Some workers formed associations to help members in times of unemployment and financial hardships.(v) Formation of socialist parties: All political parties were illegal in Russia before 1914. The Russian Social Democratic Workers Party was founded in 1898 by socialists, who respected Marxist ideas. But because of government policies, it had to operate secretly as an illegal organisation. It set up a newspaper, mobilized workers and organised strikes.