The document Extra Questions Answers - Julius Caesar Class 10 Notes | EduRev is a part of the Class 10 Course Literature Reader Class 10.
All you need of Class 10 at this link: Class 10 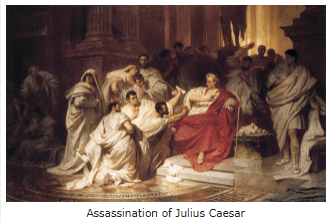 Q1. Describe the role of mob in the play Julius CaesarAns: No doubt citizens of Rome played a crucial role in the play Julius Caesar. The crowd of commoners that fills the streets served several dramatic purposes in the play, specially during the funeral oration.
Brutus logically gave his reasons that necessitated Caesar’s death. He informed the commoners that he acted out of love of Rome and his desire to prevent tyrants from controlling her. The citizens embraced his words with cheers and understanding. However, their mood altered when Antony offered his interpretation of the situation. He passionately described the deeds Caesar performed in behalf of the citizens of Rome, which clearly contradicted the opinion of the conspirators that Caesar was too ambitious. The mob who lost her individual identity and showed her inability to deal with intellect and reason. Antony's speech overwhelmed the people with grief, despair, and anger for their “beloved” Caesar’s death. It led to brutal killing of Brutus and other conspirators by the mob.
Although the citizens are important characters in the play, they are unreliable, emotionally hyped and fickle in supporting the latest and most impassioned plea for their “ears.” In the play, we witness the irrational behavior of citizens-to-mob who think only to benefit themselves.

Q2. What arguments did Brutus give for killing Caesar?
Ans: Brutus thought that Caesar was too ambitious and would have turned the Romans into slaves. Brutus's point is that like the serpent's egg Caesar was bound to hatch into something really dangerous and he would be easier to deal with while he was still in the egg stage.He stated although Caesar wasn’t bad, getting a crown would change his nature! Brutus put Caesar in poor light saying that Caesar was ambitious and that he did it for the good of his country and his countrymen.

Q3. What was the conspiracy? Who hatched it?
Ans: The conspiracy was being hatched for the past many days because Caesar’s non-stop unceasing ambition agitated the senators. Metellus Cimber, Casca, Cassius, Trebunious… and others. They deliberately asked Caesar to grant a wish. It was to enfranchise Pubius Cimber. They were well aware that they would be refused. Metellus Cimber and others had anticipated that Caesar would deny and they shall use this unpleasantness and annoyance as an excuse to kill Brutus had been convinced to join since it was the need of the hour as democracy was threatened. The conspirators feared that Caesar would become a dictator so they requested Brutus – the idealist to join them as he was a man of the masses.

Q4. Write a character sketch of Caesar
Ans: Julius Caesar was a stalwart. He was a brave and valiant warrior. He conquered to expand the Roman Empire. He added to the treasures of Rome, defeated the sons of Pompey brought laurels to Rome. Caesar believed in embracing death like true warrior. He rejected his wife’s prayers as foolish and opined that ‘death is an inevitable reality.’He firmly believed in the good of the common man. His will is an example of the same. In his will he had only thought about the well-being of masses.(common men)However there were certain lapses in his character. He was rigid, haughty and arrogant. He was over ambitious and in his lust to conquer he forgot that he was going against republicanism and democracy. He tried the true qualities of a dictator and this way the flow which drove him towards his end.

Q5. Summarize Antony's speeches.
Ans: FIRST SPEECH: When Antony re-enters after Caesar’s assassination, He laments the death of the mighty Caesar saying that it has an incomparable event. He wished for his own death at the hands of the conspirators and begged them to kill him so that he could lie beside Caesar. According to him no other hour, sword or space could give him a nobler end.
SECOND SPEECH: Antony describes himself in an unstable condition. It is dangerous to declare that he wishes to seek revenge. On the other hand he doesn’t want to defy Caesar by being considered a psychopath (flatterer). His conscience tells him that Caesar’s spirit shall grieve to see Antony as a flatterer making peace with his enemies.
THIRD SPEECH: In his third speech, Antony expresses his apology for Caesar’s death. Here he is all alone. He says that Caesar’s death will bring large scale death and destruction not only on earth but also in heaven.
Heaven shall join to avenge Caesar’s death. Bloodshed, death, destruction shall become a common sight for Romans because the death of mighty Caesar could not just pass or ignored. Dead bodies shall cry for burial.
FOURTH SPEECH: In the 4th speech Antony has come to burry Caesar. He says “he shall not praise him.” But on the contrary talks about Caesar in such a light that he may be able to renew the lost faith and love in the hearts of the country-men for him. He says that Caesar had led the conquests for the well being of Rome.
A) He had brought many captives home to Rome and ensured their financial upliftment.
B) Caesar’s heart wept for the poor.
C) On the feast of Lupercal he refused the offer of the crown 3 times.
Antony stressed upon the fact that the country-men didn’t love Caesar without a cause, so they must mourn for him. If they do not so, they have lost their reason and judgment.
FIFTH SPEECH: Antony feels pathetic that no one expresses the reverence due for Caesar’s dead body. He chooses his words with caution and says that – if he would encourage MUTINY, RAGE and PROVOCATION he would wrong Brutus and Cassius. All his words are provocative. He concludes that he would rather wrong the dead person. He also gives a hint to them about Caesar’s will after reading which all the Romans shall grieve and beg for hair and blood of Caesar to keep as a precious relic and declare it as a precious possession for the coming generations. Antony here puts ideas and words in the mouths of Romans.
SIXTH SPEECH: In his sixth speech, Antony stirs the emotions of the Romans by exposing the wounds on Caesar’s dead body. He lays stress on the wound given by Brutus. It was “the unkindest cut of all.” How the wound given by Brutus was not as fatal as the immorality of Brutus and Brutus’ betrayal had killed Caesar more than the wound.
SEVENTH SPEECH: Antony emphasizes that revenge should be well-planned so as to leave a powerful impact. He wanted the mutiny to have the desired result, a massive movement which will involve the max. number
EIGHT SPEECH: In his last speech, Antony reads ‘s will in which Caesar had promised monetary and physical benefits to each and every Roman on an equal basis:
1) 75 drachmas
2) His walks, arbors and orchards for recreation.
Antony had provoked the element of mischief present in every human being. He had ignited a fire in every heart. Even the reading of the will was the last nail in the coffin.

Q6. Write a character sketch of Mark Antony.
Ans: (a) Loyal and faithful: Loyalty to Caesar and reliable friendship was his the greatest merit. He avenged Caesar's death which had shattered him.
(b) Intelligent but Cunning and deceitful: After meeting Caesar's conspirators he reconciled in a friendly manner and expressed his grief over Caesar's death. Deceitfully he turned tables on the conspirators through his funeral speech.
(c) Great Orator: Due to his good oratory skills, he mobilized the mob against the conspirators.

Q7. Read the extract and complete the statements that follow:But I am constant as the northern star,  Of whose true-fix'd and resting quality  There was no fellow in the firmament.  (i) The speaker of these lines is _________________ (a) Julius Caesar  (b) Cassius  (c) Octavius Caesar  (d) Brutus  Ans: (a) Julius Caesar(ii) The northern star is also known as.  (a) Venus  (b) Pole star  (c) Mercury  (d) Jupiter  Ans: (b) Pole star(iii) Literary device used in the above lines is.  (a) simile  (b) metaphor  (c) personification  (d) alliteration Ans: (a) simileQ8. Read the extract and complete the statements that follow: My credit now stands on such slippery ground,  That one of two bad ways you must conceit me,  Either a coward or a flatterer.  (i) Antony addresses to ___?  (a) Caesar  (b) Caesar's supporters  (c) conspirators  (d) mob  Ans: (c) conspirators(ii) The word 'credit' in the above context means _________.  (a) reputation  (b) disrepute  (c) loan  (d) identity  Ans. (a) reputation(iii) The speaker refers to 'slippery ground' because .  (a) the ground was slippery.  (b) blood was flowing under his feet.  (c) his reputation was at stake.  (d) he may not win over the confidence of the listeners. Ans. (c) his reputation was at stake.Q9. Shakespeare used supernatural elements at many occasions in the play? What are these elements and what do they contribute to the play?Ans:  Shakespeare used supernatural elements in the play to create an atmosphere of horror or to predict something bad would happen. In Julius Caesar, these elements are portents of evil predicting Caesar's death. A few supernatural elements that came in the play are: