Failure Investigation of A Prestressed Concrete Bridge Girder Objective: To investigate the failure of a prestressed girder in accordance with ACI 318-02.Problem: A highway overpass consists of 3 parallel continuous prestressed concrete beams. The length of the overpass structure is 292.8 ft, with a width of 47 ft (Fig. 1 and 2). Each prestressed beam had 5 strands of prestressing steel. There were 22 wires in each strand and each wire had a diameter of 0.6 in. The end of each prestressed beam was supported by a corbel, which was inclined at an angle with respect to the bearing plate (Fig. 3, 4, and 5).Construction proceeded as planned: the beams were cast-in-place, and after the concrete hardened, they were post-tensioned. Minutes after the prestressing operation, 4 out of the 6 corbels broke (Fig. 3). The State Transportation Authority decided to determine the responsible parties involved in this failure case.Task: You are hired to be the expert witness on the case. The following information were established:(a) The reaction force (R) at each end of the beam right before the collapse was estimated at 275 kips.(b) The horizontal restraint offered by the bearing (i.e., the Teflon disk) is negligible.(c) Normal weight concrete was used with the compressive strength of fc ’ = 5000 psi.(d) Yield stress for normal reinforcement was fy = 60 ksi.Using the above information and the attached drawings, you are asked to assess and testify on the following questions:(1) Was the design (Fig. 6) adequate in accordance with ACI code requirements?(2) It was reported that the elastic shortening of the beam due to the initial prestressing was 0.9 in (Fig. 7). Check the design adequacy for this situation.(3) It is postulated that the workmen might have placed the Teflon disk in the wrong position initially. Together with the elastic shortening due to prestressing, the final position of the Teflon disk was as shown in Fig. 8. Check the design again using the ACI code.(4) Based on the above information, give your opinion as to the cause(s) of the collapse. It was argued that if instead of having the corbels, the prestressed beams were cast into the piers as a whole unit (i.e., fixed ends), and then the failure would not have occurred. Do you foresee any problems with this design? 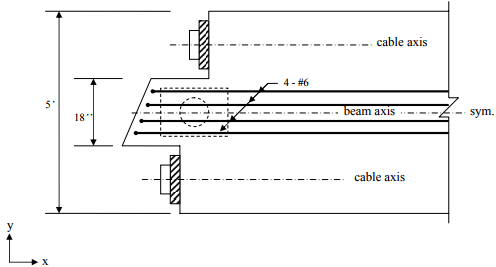 Figure 7. Elevation view of corbel (section e-e) (after initial prestressing, elastic shortening at each end of the beam, ∆L) – uniform stress on the Teflon disk From the design, over

⇒ The engineering design in Fig. 6 is adequate in accordance with ACI code 318-02.(II) With elastic shortening Similarly, we have

⇒ The engineering design in Fig. 6 is adequate in accordance with ACI code 318-02.(II) With elastic shortening Similarly, we have

⇒ With misplacement of Teflon disk and elastic shortening, the given design is not adequate.(IV) There is a good chance that the failure was due to poor design or inadequate considerations on the part of engineer. Even if the Teflon disk was correctly placed, with the elastic shortening of beam and live loads, the bridge does not have much of a chance of surviving. Misplacement of the Teflon disk greatly increased the risk of failure since no information on the site supervision on the pat of the engineer was given. A probable cause of the failure could then be attributed to both the engineer and the contractor.If the beam is cast monolithically into the pier, problems that might arise are– Secondary stresses induced die to creep, shrinkage and elastic shortening;– Thermal stresses created due to differential temperature effect.