Failure Theories and Concrete Plasticity
→ Failure of concrete
o Concrete is a brittle material which fails through brittle cleavage (splitting) at the interfaces and in mortar except for high triaxial compression where shear slippage occurs resulting in a ductile behavior. Failure occurs by tensile splitting with the fractured surface orthogonal to the direction of the maximum tensile stress or strain.

→ Prediction of multiaxial behavior
o In general the material properties are known from simple tests such as uniaxial loadings giving  f'c and ft . Prediction involves strength calculation in multiaxial situations given the data from the uniaxial tests.
o In the field of concrete research attempts have been made to apply some of the classical failure theories to concrete. These theories were altered to overcome some disadvantages or otherwise improve their agreement with the phenomenological behavior of concrete. New failure theories were therefore formed.

(Compressive strength)
→ It does not reflect splitting nature of failure.

o σ2 has no effect on strength.
o f (σ ) is the envelop of all the circles corresponding to the various states of stress at which failure takes place. 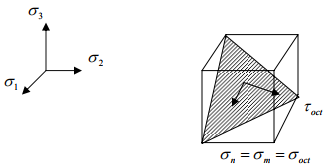 In uniaxial tension and compression,

→ This gives the same ultimate strength for uniaxial tension and compression.→ It is not valid for concrete.
→ Inclusion of

→ Invariant formulation
o A failure criterion should be based upon an invariant function of the state of stress, i.e., independent of the choice of the coordinate systems.
o Stress invariants

(more suitable for applying to concrete)

where σ1,σ2 ,σ3 are principal stresses.