+    The symbols used in Floral Formula -

Ovary half inferior or half superior /   =

The plant orans have punent odour. This odour is due to presence of sulphur containinlucosides compound. Myrosin enzyme (present in secondary cells) hydrolyse then intolucose & different isothiocyanates (Various oils).

The compound corymb inflorescence is present in cauliflower.

+    The common Characteristics of flower -

?    The each petal in cruciferae is divided into two parts-lon claw and broader lamina-limb.

?    The corolla is absent in Lepidium and Coronopus.

?    The corolla is transformed into stamens in Capsella.

*     Exception :- 2 stamens in Coronopus, 4 stamens in Lepidium and Cardamine, and 16 stamens in Meacarpea.

?    The ovary is unilocular in the beinnin but it becomes bilocular due to the formation of a false septum (replum),

*    Both the carpels arraned transversely.

Fruit - Usually siliqua which is solitary dry and dehiscent.

Silicula fruit is found in Capsella, Iberis, Lepidium and Alyssum. 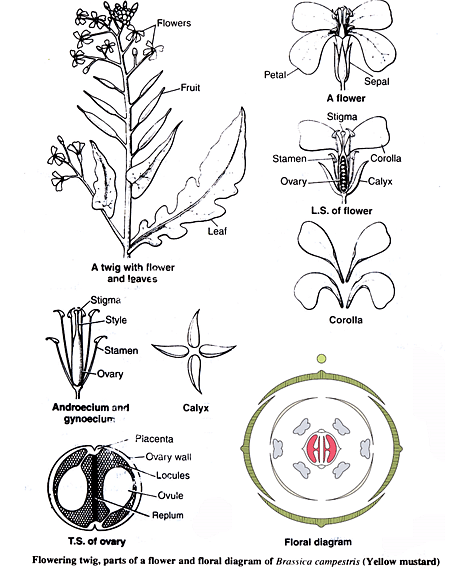 The mucilae is present in various plant orans like flower, fruit etc. in this family. Stellate (star shaped) hairs present on the shoot.

Polyamous flower are present in Kydia and unisexual flower is present in Napaea.

Epicalyx is absent in someenera of the malvaceae such as Abutilon, sida and Bombax.

Calyx :- sepals-5amosepalous valvate aestivation but in some of the plants persistant calyx are present, it means present on fruit also as in Abelmoschus andossypium.

The odd sepal is posterior in malvaceae.

* odd sepal in Malvastrum are anterior

Andorecium :- Stamens indefinite, monoadelphous The filament are united toether to form a lon staminal canal or tube around styles, epipetalous.

?    Exception : Julostylis contains 10 stamens in which 5 stamens are sterile and remainin 5 are normal.

The number of locules are equal to the number of carpels so ovary is penta locular or multilcular.

The ovary and style are enclosed by staminal tube but stima remains out side. Axile placentation

Exception :- Three carpels are present in the flower of kydia.

Fruit :- Loculicidal capsule, which is solitary, dry dehiscent multilocular and multi seeded fruit each locules breaks from the wall of the locule durin the dehiscence e. Lady's finer, cotton 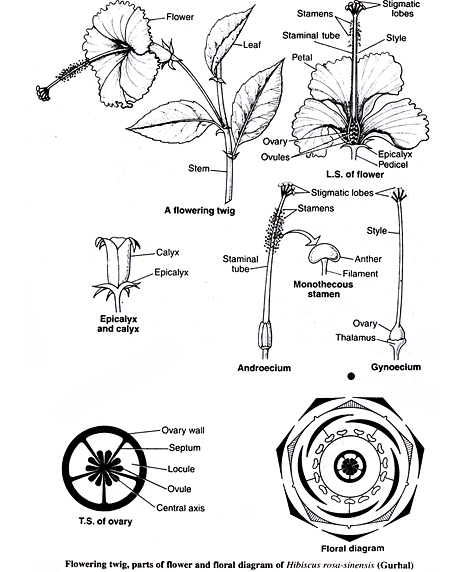 The seeds of ossypium are used for obtainin cotton fibres -

ossypium arboreum and .herbaceum are known as old world cotton while ossypium hirsutum and .barbedense is called as new world cotton.

Many ovules are present in the ovary so many seed are formed as in tomato, Brinjal etc.

Most of plants of this family are herbs, some of them are shrubs, rarely trees.

The tap root system is present in these plants.

Leaves are alternate simple and exstipulate.

Monochasical cyme is of two types :-

The sepals in some of the plants chaned into membranous balloon like structure which help in dispersal of fruits. e.. Physalis (Raspberry). The sepal rows with the rowth of the fruit and becomes thickened and elonated. They are known as accrescent such as in Brinjal.

The odd sepal in solanaceae is in posterior condition.

Multilocular ovary is formed in tomato and Datura due to formation of false septum.

* Unilocular is present in Henoonia.

The fruit of the Datura is septifraal capsule in which dehiscence takes place throuh the septa. 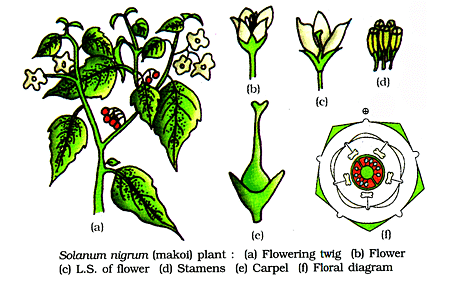 Atropa belladona (Deadly niht shade) The roots are used in the manufacture of belladonna. Atropine alkaloids is obtained from the roots. Atropine is used to dialate the pupil of the eye.

Stramonium is obtained form the seeds of Datura (Thorn apple) in which Scopolamine alkaloid is present. It is pain reliever and sedative.

Henbane medicine (containin hyoscyamine alkaloid) obtained from the leaves of Hyscyamus nier. It is used in the treatment of asthama and whoopin couh.

Nicotine & anabasin alkaloid obtain from the leaves of Nicotiana tabacum (Tobacco) & N. rustica It is nerve stimulant and are also used as insecticide. Its leaves are used as fumiatory.

Dissimilarities are found in the remainin characters. On the basis of dissimilarities, (inflorescence and floral characters) Leuminosae family is divided into 3 subfamilies

Many modification are found in leaves as follows -

Some of the leaflets of compound leaves of Pea are modified into tendrils for climbin.

All the leaflets of Lathyrus odoratus are transformed into the tendrils.

The stipules of leaves in both Pea and Lathyrus odoratus become foliaceous.

Petals are absent in Lespedeza.

10 – stamens are free in Sophora

The posterior stamen is absent in Arachis, Dalberia and Abrus. 9-stamens are present in them in monoadelphous condition. (9)

Sometimes lomentum is also found as in Arachis

The lathyrism disease is occurred by the use of this dal.

Its roots are used in couhs & cold.

Aeschynomeni indica ''Omfosm pith Plant'' ® Its wood is spony. Toys are made from this.

Dalberia latifolia – Its bark is used in tannin.

+    Inflorescence – Panicle or raceme of racemes or compound raceme

*   In Bauhinia cymose inflorescence is present

Petals are absent in Ashok (Saraca)

Only 3-petals are present in Imli (Tamarindus), two petals are modified scales

Stamens 10, free, arraned in two whorls/(Circles) 5 + 5, some of them are sterile called as staminodes. Most of the enera have 3 staminodes.

*   7 Stamens are present in Tamarindus, monoadelphous, out of them 4 are staminodes.

All 10 stamens are fertile in parkinsonia,

Leume or pod is present.

*   Lomentum is present in Tamarindus.

It yields a dye haematoxylin.

The raw fruits of amaltas (Cassia fistula) are used as luxative.

Ashokarist is obtained from the bark of ashok tree (ayurvedic medicine)

The leaves and seed Cassia occidentails and Cassia obtusifolia (also purative) are used in skin diseases.

The bark and leaves of Cassia lauca are used in diabetes and onorrhoea.

A tonic is prepared from the bark Bauhinia varieata.

Caesalpinia sappan – 'ulal' is obtained from its heart wood.

Bauhinia purpurea and Ceratonia silqua are used as fodder.

The stipule is modified into thorn as in Acacia.

Phyllode is found in Australian Acacia

Two types of inflorescences are found in Mimosoidae family -

*   4 stamens which are free-found in Mimosa.

Many species of Acacia yield um.

The pods of shikakai are also used as insecticides.

um arabic is obtained from the Acacia seneal.

sometimes abnormal secondary rowth is found in trees such as – Dracaena, Yucca.

+    Stem- The aerial stem is present in few plants.

Majority of the plants have underround stem. It is of two type-

*   In Allium three different type of leaves are found scale, Foliar and Fleshy.

It is of many types as follows :-

*   The flowers in Ruscus and Smilax are unisexual and incomplete.

Some have berry as in Lily and normally capsule as in onion.

Convalaria majlis = Lily of the valley

The juice of leaves is used in rheumatism and ear pain.

var patha = Aloe vera – the juice of the leaves is used as skin tonic and increase the eye siht.

Asphodelus tennuifolius – Its seeds are used in peptic ulcer.

Urinea (wild onion) and Scilla rat killer medicine is prepared from their bulb.

loriosa superba – It is used in leprosy and piles, it is also very useful in bitin of snake or scorpion.

Colchicum automnale-Colchicine is obtained from this plant which is used to induce polyploids in plants.

Phormium tenax – It is used for preparin oil paints and varnishes.

+      Calyx usually represented by hairy structure called pappus or represented by minute scales. It is persistant & attached on fruit & helps in its dispersal.

+      In Dehlia fasciculated roots are present.

Helianthus tuberosus – Their tubers are eaten which contain inulin.

Helianthus annus = Sunflower (Suraj mukhi) – The seeds of this yields valuable oil which is used for cookin purposes.

Artemisia obsinthium – Santonin medicine obtains from Artemisia which is useful for removal of worms.

Arnica montana – Arnica medicine is obtained which is used in healin of wound and as hair oil.

Anthemis nobilis – Camomile named medicine is obtained from the inflorescence.

Species of blumea produce ''Kapoor'' which is a useful medicine.

Taraxacum officinale – ''Taraxacum'' medicine is obtained which is purative and diuretic.

Ambrosia artemissifolia = Rin weed – Hay fever is due to its pollen rains.

This is the larest family of the Indian flora.

Flowers sessile, bracteate, bracteolate. Two sterile or empty scales called lumes occur at the base of the main axis. A series of florets are present above the lumes with superieor and inferior palea. Inferior palea is fertile bract which is also known as fertile lume lemma. They can produce hair or awn. Superior palea is morpholoically act as a bracteole.

Flowers zyomorphic, bisexual, but in Zea and coix flowers are unisexual. Flowers are hypoynous and trimerous.

Triticum aestivum (Wheat) : A spike of spikelets, one spikelet,

and enlared spikelet, and open flower, a dissected flower and floral diaram.

Oil obtained from their root which is used in perfumery.

Vetiveria zizanoides – (Khus) – It is used for preparation of on alcoholic drinks. Its root are also used in perfumery.

Inflorescence-Solitary axillary, most of the plants of this family are monoecious.

Tricarpellary, syncarpous, inferior ovary, unilocular, parietal placentation but it looks like axile placentation due to swellin of placenta, style one.

The bitter taste of the fruit is due to presence of tetracyclic triterpenes.

Ecballium eleterium = Eleterium medicine is obtained, which is very useful in malaria and hydrophobia.

Bryonia rostrata – It is used in asthama and piles

Fruit – Capsule or berry or drupe

Rubia tinctoria – Red dye is obtained from its roots

+    Fabaceae is the alternative name of the Papilionaceae.

+    Desmodium latifolium the member of papilionateae family which is halophyte.

+    Pollen rains in Mimosoidae are usually present in the form of packets.

+    Aloin alkaloides are obtained from Aloe plant of Liliaceae.

+    The flowers enter into the soil after fertilization in round nut (eocarpic fruit).

+    Pulses are rich source of proteins.