The document Features of java Computer Science Engineering (CSE) Notes | EduRev is a part of Computer Science Engineering (CSE) category.
All you need of Computer Science Engineering (CSE) at this link: Computer Science Engineering (CSE)
Features of Java
The prime reason behind creation of Java was to bring
portability and security feature into a computer language.
Beside these two major features, there were many other
features that played an important role in moulding out the
final form of this outstanding language. Those features are :
1) Simple
Java is easy to learn and its syntax is quite simple, clean and
easy to understand.The confusing and ambiguous concepts
of C are either left out in Java or they have been
re-implemented in a cleaner way.
Eg : Pointers and Operator Overloading are not there in java
but were an important part of C .
2) Object Oriented
In java everything is Object which has some data and
behaviour. Java can be easily extended as it is based on
Object Model.
3) Robust
Java makes an effort to eliminate error prone codes by
emphasizing mainly on compile time error checking and
runtime checking. But the main areas which Java improved
were Memory Management and mishandled Exceptions by
introducing automatic Garbage Collector and Exception
Handling.
4) Platform Independent
Unlike other programming languages such as C, C etc
which are compiled into platform specific machines. Java is
guaranteed to be write-once, run-anywhere language.
On compilation Java program is compiled into bytecode.
This bytecode is platform independent and can be run on any
machine, plus this bytecode format also provide security.
Any machine with Java Runtime Environment can run Java
Programs. 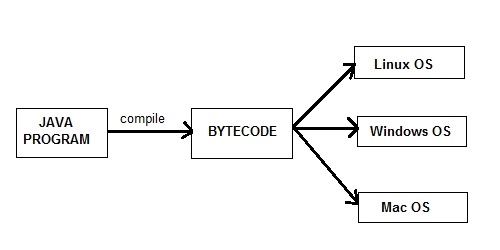 5) Secure
When it comes to security, Java is always the first choice.
With java secure features it enable us to develop virus free,
temper free system. Java program always runs in Java
runtime environment with almost null interaction with system
OS, hence it is more secure.
6) Multi Threading
Java multithreading feature makes it possible to write
program that can do many tasks simultaneously. Benefit of
multithreading is that it utilizes same memory and other
resources to execute multiple threads at the same time, like
While typing, grammatical errors are checked along.
7) Architectural Neutral
Compiler generates bytecodes, which have nothing to do
with a particular computer architecture, hence a Java
program is easy to intrepret on any machine.
8) Portable
Java Byte code can be carried to any platform. No
implementation dependent features. Everything related to
storage is predefined, example: size of primitive data types
9) High Performance
Java is an interpreted language, so it will never be as fast as
a compiled language like C or C . But, Java enables high
performance with the use of just-in-time compiler.
Offer running on EduRev: Apply code STAYHOME200 to get INR 200 off on our premium plan EduRev Infinity!
Download EduRev app here for Computer Science Engineering (CSE) preparation.