These parts of the system along with a pair of the mammary glands are integrated structurally and functionally to support the processes of ovulation, fertilisation, pregnancy, birth and child care. 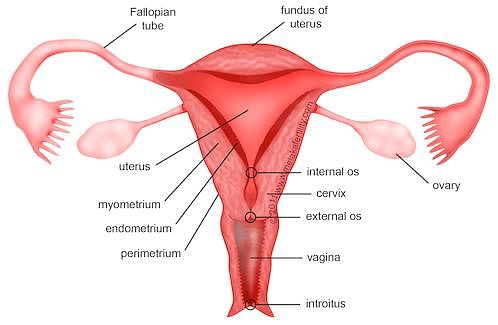 (i) Ovaries: Ovaries are the primary female sex organs that produce the female gamete (ovum) and several steroid hormones (ovarian hormones- Estrogen and Progesterone).(ii) Location: one on each side of the lower abdomen(iii) Size: Each ovary is about 2 to 4 cm in length and is connected to the pelvic wall and uterus by ligaments.(iv) Detail: Each ovary is covered by a thin epithelium which encloses the ovarian stroma. The stroma is divided into two zones – a peripheral cortex and an inner medulla.(v) Accessory ducts: Oviduct (fallopian tubes), uterus and vagina constitute the female accessory ducts.(vi) Oviduct (fallopian tubes): Each fallopian tube is about 10-12 cm long and extends from the periphery of each ovary to the uterus, the part closer to the ovary is the funnel-shaped infundibulum. The edges of the infundibulum possess finger-like projections called fimbriae, which help in collection of the ovum after ovulationThe infundibulum leads to a wider part of the oviduct called ampulla. The last part of the oviduct, isthmus has a narrow lumen and it joins the uterus.(vii) Uterus: The uterus is single and it is also called womb. The shape of the uterus is like an inverted pear. It is supported by ligaments attached to the pelvic wall.The wall of the uterus has three layers

The endometrium undergoes cyclical changes during menstrual cycle while the myometrium exhibits strong contraction during delivery of the baby.

(viii) Cervix: The uterus opens into vagina through a narrow cervix. The cavity of the cervix is called cervical canal (Figure 3.3b) which along with vagina forms the birth canal.

(i) Mons pubis: It is a pad of sub cutaneous connective tissue, lying in front of pubis & is covered by pubic hairs in  adult female.(ii) Labia Majora: Are fleshy folds of tissue, which extend down from the mons pubis and surround the vaginal opening.(iii) Labia Minora: They are two thin folds of skin present just within the labia majora.(iv) Clitoris: Tiny finger-like structure which lies at the upper junction of the two labia minora above the urethral opening.(v) Hymen: The hymen is often torn during the first coitus (intercourse). However, it can also be broken by a sudden fall or jolt, insertion of a vaginal tampon, active participation in some sports like horseback riding, cycling, etc. In some women the hymen persists even after coitus. In fact, the presence or absence of hymen is not a reliable indicator of virginity or sexual experience.

MAMMARY GLANDS
A functional mammary gland is characteristic of all female mammals. The mammary glands are paired structures (breasts) that contain glandular tissue and variable amount of fat. 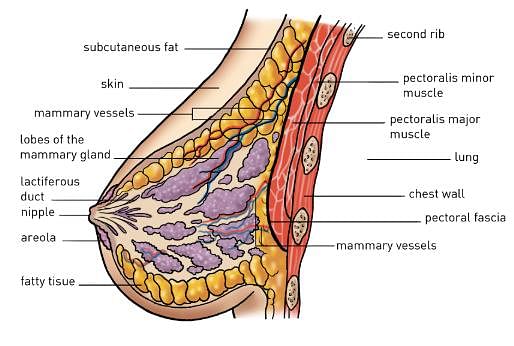 Glandular tissue of each breast is divided into 15-20 mammary lobes containing clusters of cells called alveoli .
The cells of alveoli secrete milk, which is stored in the cavities (lumens) of alveoli. The alveoli open into mammary tubules. The tubules of each lobe join to form a mammary duct. Several mammary ducts join to form a wider mammary ampulla which is connected to lactiferous duct through which milk is sucked out.