The document Fertilization in Plants & Double Fertilization Notes - NEET is a part of NEET category.
All you need of NEET at this link: NEET

A plant is nature’s gift as they provide us with the food, oxygen, shelter, clothing, etc. They are also known as universal or primary producers. Like all other living things, plant respire, grow, develop, excrete and reproduce. All higher plants reproduce by fertilization. Fertilization in flowering plants was discovered by Ralph B. Strasburger in the year 1884. Let us have a brief discussion on fertilization. 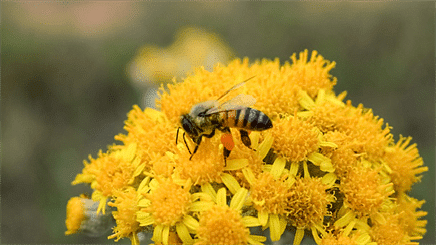 In plants, fertilization is a process of sexual reproduction, which occurs after pollination and germination.

Fertilization can be defined as the fusion of the male gametes (pollen) with the female gametes (ovum)  to form a diploid zygote. It is a physicochemical process which occurs after the pollination of the carpel. The complete series of this process takes place in the zygote to develop into a seed.

In the fertilization process, flowers play a significant role as they are the reproductive structures of angiosperms (flowering plants). The method of fertilization in plants occurs when gametes in haploid conditions fuse to produce a diploid zygote.

In the course of fertilization, male gametes get transferred into the female reproductive organs through pollinators (honey bees, birds, bats, butterflies, flower beetles) and the final product will be the formation of the embryo in a seed.

The pollen tube opens into the ovule through the micropyle and bursts into the embryo sac. Here, the male nucleus unites with the nucleus of an egg inside the ovule forming a diploid zygote, which later swells up and develops into a fruit.

➤ Types of FertilizationFertilization process can be grouped into three types and are classified mainly based on the entry of the pollen tube into the ovule.

➤ Definition:“Double fertilization is a complex process which involves the fusion of one female gametophyte with two male gametes”

Double fertilization provides stimulus to the plant resulting in the ovarian development to fruits and development of ovules into the seed. When the haploid male gametes and female gametes fuse, the diploid state of the plant is restored.

Double Fertilization in AngiospermsAngiosperms are flower-bearing plants and are the most diverse group of terrestrial plants. The flowers form the reproductive part of angiosperms with separate male and female reproductive organs. Each contains gametes – sperm and egg cells, respectively.

Pollination helps the pollen grains to reach stigma via style. The two sperm cells enter the ovule-synergid cell. This proceeds to fertilization.

Double fertilization is a complex process where out of two sperm cells, one fuses with the egg cell and the other fuses with two polar nuclei which result in a diploid (2n) zygote and a triploid (3n) primary endosperm nucleus (PEN) respectively.

Development of Embryo in AngiospermsOnce fertilization is completed, embryonic development starts and no more sperms can enter the ovary. The fertilized ovule develops into a seed, and ovary tissues develop a fleshy fruit which encloses the seed.

➤ Stages of Embryonic Development In Angiosperms

The significance of double fertilization is as follows:

Q. Why is double fertilization absent in gymnosperms?Ans: Gymnosperms are devoid of ovaries, and the male and female gametophytes are present on cones. Whereas, in angiosperms, the gametophytes are a part of the flower. Hence, pollination in gymnosperms occurs with the help of wind that blows the pollen to land on the female cones. That is why they do not exhibit double fertilization.

The document Fertilization in Plants & Double Fertilization Notes - NEET is a part of NEET category.
All you need of NEET at this link: NEET