Solution. Increase in P.E. of system

This increase in P.E. is at the expense of  K.E. of mass m

where v is the velocity with which mass m is projected. 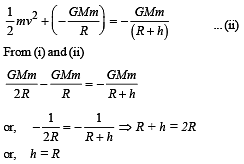 Q.1. It is possible to put an artificial satellite into orbit in such a way that it will always remain directly over New Delhi.    (1984 - 2 Marks)