Remainders is a very crucial concept since numerous questions from Quantitative Aptitude section require the concepts of remainder to solve them. Most of the candidates have already studied this concept in their elementary schools and can solve the related questions. Here is a lesson on Remainders to help the candidates revise the topic in an efficient way.

What is Remainder?Supposing a number “N” is divided by another number “x”; if the quotient obtained is “Q” and the remainder obtained is “R”, then the number can be expressed as N = Qx + R. 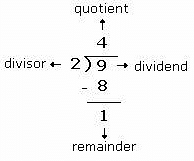 Basic Remainder Theorem
The basic remainder theorem is based on the product of individual remainders.

If R is the remainder of an expression( p*q*r)/X, and pR, qR and rR are the remainders when p,q and r are respectively divided by X, then it can be said that ((pR × qR × rR ))/X, will give the same remainder as given by (p*q*r)/X.
Let’s understand this with the help of some examples.