First Order Process
A first order process is a process whose output y(t) is modeled by a first order differential equation.

are input and output of the process espectively. If

, then define the following:

, the equation can be re-written as

are the deviation forms of the input and output variables of the process around the steady state, whose initial conditions are assumed to be the following:

Taking Laplace Transform of the eq. (39) we obtain,

Example of a first order process 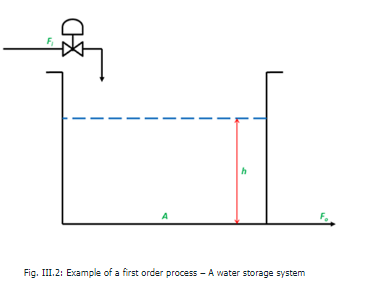 It has a cylindrical tank of cross sectional area A . Water flows into the tank with a rate of Fi and flows out of the tank with a rate of Fo . Height of water level is represented by h . A control valve, located on the inlet pipe, indicates that Fi can be considered as the manipulated input of the process whereas h can be considered as the controllable output of the process. From the basic knowledge of fluid mechanics (Bernoulli's principle), it is understood that pressure head of the water column provides the necessary kinetic energy for water to eject out of the tank at its bottom. Hence,

where, ρ is the density of water, g is the gravitational constant, v is the velocity of water, a is the cross sectional area of the exit pipe. Thus,

Where, c is a process constant. A simple material balance would yield the following equation:

The steady state (nominal) point of operation is around

. The above equation is a nonlinear equation and hence this needs to be linearized before a Laplace Transform can be used. Hence, in order to linearize the nonlinear term (√h) of the above equation around the nominal point of operation, Taylor series expansion is carried out on it as the following:

are the deviation variables of inlet flow rate of water and height of the water level in the tank respectively. Taking the Laplace Transform of eq.(49), we obtain