Floating Point RepresentationThe floating point representation of the number has two parts. The first part represents a signed fixed point numbers called mantissa or significand. The second part designates the position of the decimal (or binary) point and is called exponent. For example, the decimal no + 6132.789 is represented in floating point with fraction and exponent as follows.

This representation is equivalent to the scientific notation +0.6132789 × 10+4 The floating point is always interpreted to represent a number in the following form ±M × R±E.Only the mantissa M and the exponent E are physically represented in the register (including their sign). The radix R and the radix point position of the mantissa are always assumed.

A floating point binary no is represented in similar manner except that it uses base 2 for the exponent.

For example, the binary no +1001.11 is represented with 8 bit fraction and 0 bit exponent as follows.

There are four basic operations for floating point arithmetic. For addition and subtraction, it is necessary to ensure that both operands have the same exponent values. This may require shifting the radix point on one of the operands to achieve alignment. Multiplication and division are straighter forward.

A floating point operation may produce one of these conditions: Floating Point Multiplication The multiplication can be subdivided into 4 parts.1. Check for zeroes.2. Add the exponents.3. Multiply mantissa.4. Normalize the product 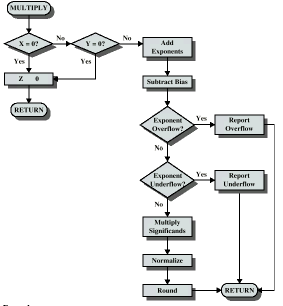 Floating Point DivisionThe division algorithm can be subdivided into 5 parts1. Check for zeroes.2. Initial registers and evaluates the sign.3. Align the dividend.4. Subtract the exponent.5. Divide the mantissa.