Flow Past a Source 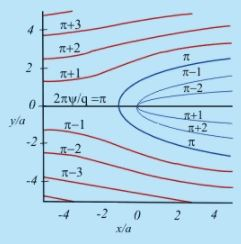 Fig 23.1  The streamlines of the flow past a line source for equal increments of 2πψ/q
The Plane coordinates are x/a, y/a where a=k/u

when uniform flow is superimposed with a vortex flow -

Flow About a Rotating Cylinder

The pressure distribution will result in a force, a component of which will culminate in lift force

The phenomenon of generation of lift by a rotating object placed in a stream is known as Magnus effect.

The velocity potential and stream functions for the combination of doublet, vortex and uniform flow are

By making use of either the stream function or velocity potential function, the velocity components are (putting x= rcosθ and y= rsinθ )

At the stagnation points the velocity components must vanish. From Eq. (23.3), we get

At the stagnation point, both radial and transverse velocity components must be zero .

Thus the location of stagnation point occurs at

The streamline passing through these points may be determined by evaluating ψ at these points.

Substitution of the stagnation coordinate (r, θ) into the stream function (Eq. 23.2) yields

Equating the general expression for stream function to the above constant, we get

By rearranging we can write

All points along the circle

satisfy Eq. (23.8) , since for this value of r, each quantity within parentheses in the equation is zero.

Considering the interior of the circle (on which ψ = 0) to be a solid cylinder, the outer streamline pattern is shown in Fig 23.2. 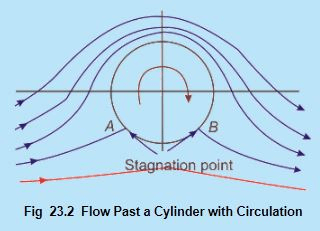 At the stagnation point

The limiting case arises for 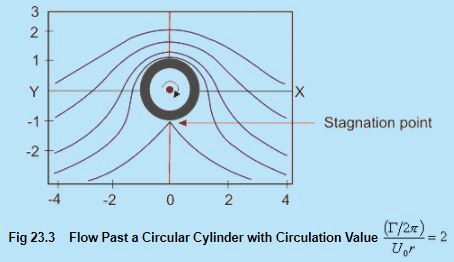 However, in all these cases the effects of the vortex and doublet become negligibly small as one moves a large distance from the cylinder.

The flow is assumed to be uniform at infinity.

We have already seen that the change in strength

of the vortex changes the flow pattern, particularly the position of the stagnation points but the radius of the cylinder remains unchanged.

Lift and Drag for Flow About a Rotating Cylinder

The pressure at large distances from the cylinder is uniform and given by p0.

Deploying Bernoulli's equation between the points at infinity and on the boundary of the cylinder,

The lift may calculated as

The drag force , which includes the multiplication by cosθ (and integration over 2π) is zero.

Aerofoils are streamline shaped wings which are used in airplanes and turbo machinery. These shapes are such that the drag force is a very small fraction of the lift. The following nomenclatures are used for defining an aerofoil

The theory of thick cambered aerofoils uses a complex-variable mapping which transforms the inviscid flow across a rotating cylinder into the flow about an aerofoil shape with circulation.

Flow Around a Thin Aerofoil 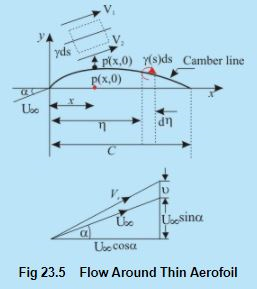 A vortical motion of strength

For a small camber (having small α), this expression is identically valid for the induced velocity at point p' due to the vortex sheet of variable strength

on the camber line. The resultant velocity due to

[normal component of velocity at the camber line should be

[normal component of velocity at the camber line should be

it can be rewritten as

f v is very small   [v << U∞.], Vs becomes equal to U∞. The difference in velocity across the camber line brought about by the vortex sheet of variable strength y (s) causes pressure difference and generates lift force.

Generation of Vortices Around a Wing

where b is the span length, As is the plan form area as seen from the top.. 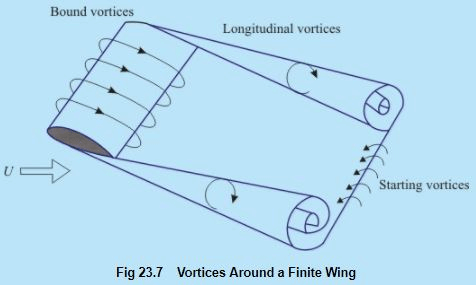 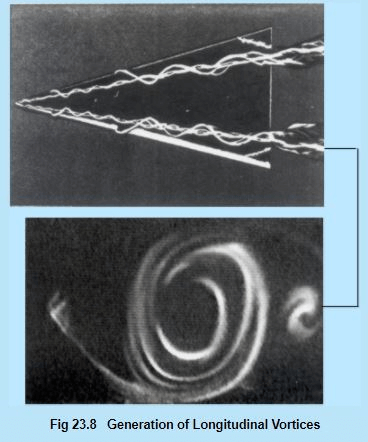