In several practical situations, flow takes place under a given head through different pipes jointed together either in series or in parallel or in a combination of both of them.

In this case, rate of flow Q remains same in each pipe. Hence,

where, hf is the loss of head due to the flow from 1 to 2. Recognizing the minor and major losses associated with the flow, hf can be written as

The subscripts A, B and C refer to the quantities in pipe A, B and C respectively. Cc is the coefficient of contraction.

Equation (36.4) states that the total flow resistance is equal to the sum of the different resistance components. Therefore, the above problem can be described by an equivalent electrical network system as shown in Fig. 36.2

where, Q is the total flow rate and QA and QB are the flow rates through pipes A and Brespectively.

Equating the above two expressions, we get -

From the above discussion on flow through branched pipes (pipes in series or in parallel, or in combination of both), the following principles can be summarized:

The principles 3 and 4 can be written analytically as

While Eq. (36.9) implies the principle of continuity in a hydraulic circuit, Eq. (36.10) is referred to as pressure equation of the circuit.

Where 'e' is defined to be the error in pressure equation for a loop with the assumed values of flow rate in each path.
From Eqs (36.13a) and (36.13b) we have

Considering the error dQ to be the same for all hydraulic paths in a loop, we can write

The error in flow rate dQ is determined from Eq. (36.17) and the flow rate in each path of a loop is then altered according to Eq. (36.11).
The Hardy-Cross method can also be applied to a hydraulic circuit containing a pump or a turbine. The pressure equation (Eq. (36.10)) is only modified in consideration of a head source (pump) or a head sink (turbine) as

where ΔH is the head delivered by a source in the circuit. Therefore, the value of ΔH  to be substituted in Eq. (36.18) will be positive for a pump and negative for a turbine.

A pipe network with two loops is shown in Fig. 36.5. Determine the flow in each pipe for an inflow of 5 units at the junction A and outflows of 2.0 units and 3.0 units at junctions D and C respectively. The resistance R for different pipes are shown in the figure. 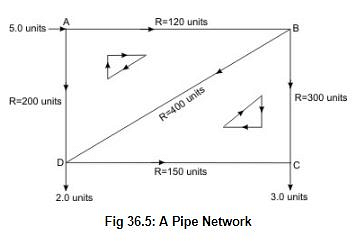 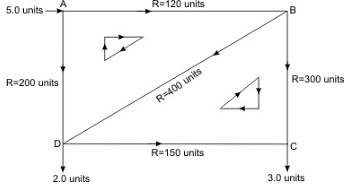 Flow direction is assumed positive clockwise for both the loops ABD and BCD . The iterative solutions based on Hardy-Cross method has been made. The five trials have been made and the results of each trial is shown in Fig. 36.5; for each trial, d Q is calculated from Eq. (36.17). After fifth trial, the error d Q is so small that it changes the flow only in the third place of decimal. Hence the calculation has not been continued beyond the fifth trial. 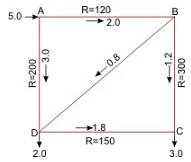 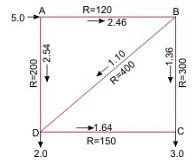 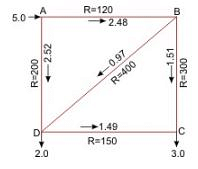 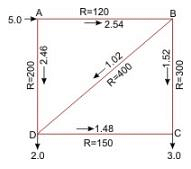 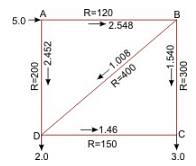