Question 1. Two identical pipes (i.e., having the same length, same diameter, and same roughness) are used to withdraw water from a reservoir. In the first case, they are attached in series and discharge freely into the atmosphere. In the second case, they are attached in parallel and also discharge freely into the atmosphere. Neglecting all minor losses, and assuming that the friction factor is same in both the cases, the ratio of the discharge in the parallel arrangement to that in the series arrangement (round off to 2 decimal places) is _______     [2019 : 2 Marks, Set-II]Solution: Given: Two identical pipes of same length (L), diameter (D) and roughness (ks).1st case (Series)Assume height of reservoir = H 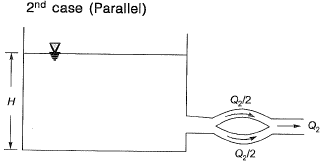 =2.83 (round off to 2 decimal place)Question 2. Two water reservoirs are connected by a siphon (running full) of total length 5000 m and diameter of 0.10 m, as shown below (figure not drawn to scale). 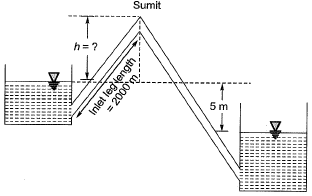 The inlet leg length of the siphon to its summit is 2000 m. The difference in the water surface levels of the two reservoirs is 5 m. Assume the permissible minimum absolute pressure at the summit of siphon to be 2.5 m of water when running full. Given: friction factor, f = 0.02 throughout, atmospheric pressure — 10.3 m of water and acceleration due to gravity g = 9.81 m/s2. Considering only major loss using Darcy-Weisback equation, the maximum height of the summit of siphon from the water level of upper reservoir, h (in m, round off to 1 decimal p lace) is_______ .    [2019 : 2 Marks, Set-I]Solution: 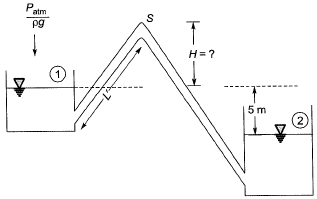 Consider only major lossesApply energy equation between (1) and (2) 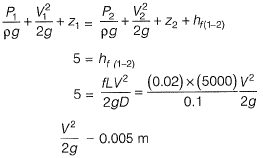 Apply energy equation between (1) and (S)

Head loss due to frictions, 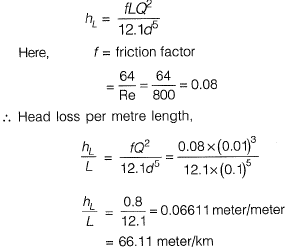 Question 4. A triangular pipe network is shown in the figure 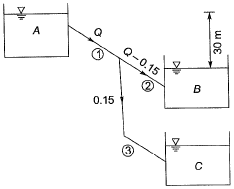 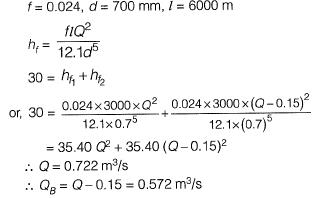 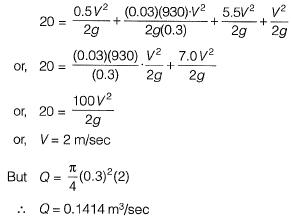 Question 9. An incompressible fluid is flowing at a steady rate in a horizontal pipe. From a section, the pipe divides into two horizontal parallel pipes of diameters d1 and d2 (where d1 = 4d2) that run for a distance of L each and then again join back to a pipe of the original size. For both the parallel pipes, assume the head loss due to friction only and the Darcy-Weisbach friction factor to be the same. The velocity ratio between the bigger and the smaller branched pipes is ____ .     [2014 : 2 Marks, Set-I]Solution: 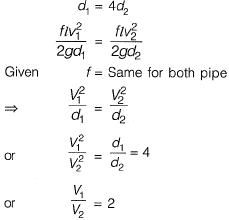 Note: In this problem, Hagen-Poiseuille equation can't be applied because in the problem laminar flow is not mentioned.Question 10. A 2 km pipe of 0.2 m diameter connects two reservoirs. The difference between the water levels in the reservoir is 8 m. The Darcy Weisbach friction factor of the pipe is 0.04. Accounting for frictional entry and exit losses. The velocity in the pipe in (m/sec) is    [2013 : 2 Marks](a) 0.63(b) 0.35(c) 2.52(d) 1.25Answer: (a)Solution: Frictional loss, 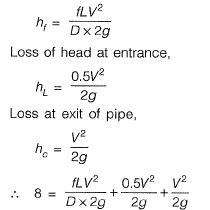 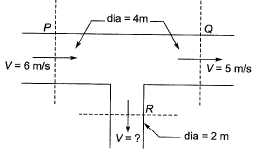 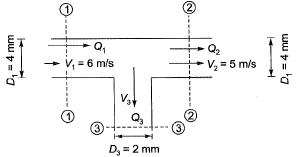 In case of double pipe discharge is increased by 25% than that of previous case hence, 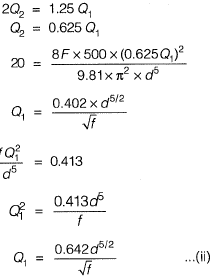