Question 1. A circular duct carrying water gradually contracts from a diameter of 30 cm to 15 cm. The figure (not drawn to scale) shows the arrangement of differential manometer attached to the duct. 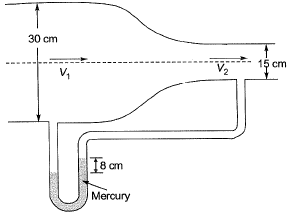 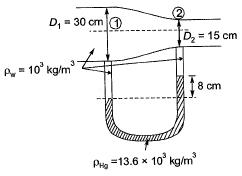 while the nozzle diameter marked at section 2-2 is

Assume the following:(i) Acceleration due to gravity = 10 m/s2 (ii) Weights of both the bent pipe segment as well as water are negligible(iii) Friction across the bend is negligible.The magnitude of the force (in kN, up to two decimal places) that would be required to hold the pipe section is _________ .      [2017 : 2 Marks, Set-I]Solution:

Since it is given that losses are negligible. Take coefficient of discharge as,CD= 1Discharge,

Question 5.  A venturimeter, having a diameter of 7.5 cm at the throat and 15 cm at the enlarged end, is installed in a horizontal pipeline of 15 cm diameter. The pipe carries an incompressible fluid at a steady rate of 30 litres per second. The difference of pressure head measured in terms of the moving fluid in between the enlarged and the throat of the venturimeter is observed to be 2.45 m. Taking the acceleration due to gravity as 9.81 m/s2, the coefficient of discharge of the venturimeter (correct up to two places of decimal) is ____ .     [2014 : 2 Marks, Set-I]
Solution: 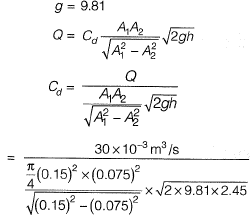 Answer: (d)
Solution: Hygrometer: A hygrometer is an instrument used for measuring the amount of humidity and water vapour in the atmosphere, in soil or in confined spaces.
Tensiometer: It is used to measure capillary potential of soil water.

Question 7. Match List-I (Devices) with List-ll (Uses) and select the answer using the codes given below the lists:
List-I
A. Pitot tube
B. Manometer
C. Venturimeter
D. Anemometer
List-ll
1. Measuring pressure in a pipe
2. Measuring velocity of flow in a pipe
3. Measuring air and gas velocity
4. Measuring discharge in a pipe
Codes:   [2010 : 1 Mark]

Answer: (c)
Solution: Pitot tube: It is used to measure velocity of fluid. Difference in the readings of pitot tube and piezometer (h), indicates the velocity head. This is with the assumption that pierometric head at A and C is same