In rolling contact bearings, the rotating shaft load is carried by a series of balls or rollers placed between rotating and non-rotating elements. The rolling contact type bearings are of two types, namely, 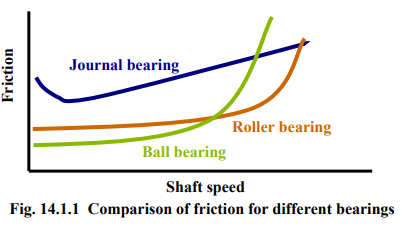 Here, we will discuss only about journal, ball and roller bearings, being most commonly used in design. 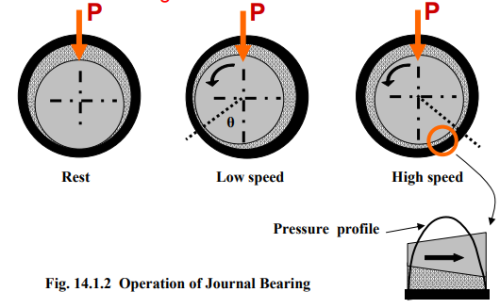 Fig. 14.1.2 describes the operation of a journal bearing. The black annulus represents the bush and grey circle represents the shaft placed within an oil film shown by the shaded region. The shaft, called journal, carries a load P on it. The journal being smaller in diameter than the bush, it will always rotate with an eccentricity.

When the journal is at rest, it is seen from the figure that due to bearing load P, the journal is in contact with the bush at the lower most position and there is no oil film between the bush and the journal. Now when the journal starts rotating, then at low speed condition, with the load P acting, it has a tendency to shift to its sides as shown in the figure. At this equilibrium position, the frictional force will balance the component of bearing load. In order to achieve the equilibrium, the journal orients itself with respect to the bush as shown in figure. The angle θ, shown for low speed condition, is the angle of friction. Normally at this condition either a metal to metal contact or an almost negligible oil film thickness will prevail. At the higher speed, the equilibrium position shifts and a continuous oil film will be created as indicated in the third figure above. This continuous fluid film has a converging zone, which is shown in the magnified view. It has been established that due to presence of the converging zone or wedge, the fluid film is capable of carrying huge load. If a wedge is taken in isolation, the pressure profile generated due to wedge action will be as shown in the magnified view.

Hence, to build-up a positive pressure in a continuous fluid film, to support a load, a converging zone is necessary. Moreover, simultaneous presence of the converging and diverging zones ensures a fluid film continuity and flow of fluid. The journal bearings operate as per the above stated principle.

The background of hydrodynamic theory of lubrication

The experimental investigations by Petroff and Tower form the background of the hydrodynamic theory. Later on Osborne Reynolds conducted experiments and published the findings in the form of present day hydrodynamic theory of lubrication and the corresponding mathematical equation is known as Reynolds’ equation.

U : surface speed of the wedge, in x-directionp : pressure at any point(x,z) in the filmμ : Absolute viscosity of the lubricanth : film thickness, measured in y-direction

The left hand side of the equation represents flow under the pressure gradient. The corresponding right hand side represents a pressure generation mechanism. In this equation it has been assumed that the lubricant is incompressible and Newtonian. The wedge shape, that was discussed earlier, is assumed to be a straight profile as shown in Fig.14.1.3. The bearing is very long in the Z direction and the variation of pressure is in the X and Z direction.

Let us have a look at the right hand term in details. 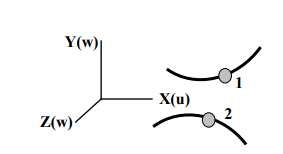 There are two moving surfaces 1 and 2 as indicated in Fig. 14.1.4. For 1 the velocities are u1, v1 and w1 along the three coordinate axes X, Y and Z respectively. For 2, similarly the velocities are u2, v2 and w2 respectively. Equation (14.1.2) represents the full form of the right hand side of Reynolds’ equation. For the purpose of explanation, partial derivative of only the first term of equation (14.1.2) is written in equation (14.1.3). Here u1+ u2 have been replaced by U.

is known as the stretch. All the three terms of (14.1.3) contribute in pressure generation mechanism.

in equation (14.1.2) is called squeeze film; with respect to time how the film thickness is changing is given by this term.

is the compressibility of the fluid with time and it is termed as compression.

The simplified form of the Reynolds’s equation, (14.1.1), has only the physical wedge term,