We have seen that it is easy to form a differential heat balance equations. However, for practical cases, it becomes tedious or impossible to solve the differential equations. Therefore, for practical situations, the heat transfer coefficient is calculated using the empirical correlations, which are developed over the years. Though these correlations have a good amount of error in most of the situations but these are indispensible for the estimation of heat transfer coefficients.

The convective heat transfer may be

4.2 Forced convection mechanism: flow over a flat horizontal plateConsider the flow of a fluid over an immersed flat horizontal plate of very large width, as shown in fig. 4.1. The fig. shows that the flow is fully developed with no entrance losses. The bulk flow or free stream velocity is represented by v. Velocity of the fluid at the surface of the flat plate is zero at no-slip condition. The velocity of the fluid in the y-direction from the plate increases from zero to free stream velocity. The region above the plate surface within which this change of velocity from zero to the free stream value occurs is called the boundary layer. The thickness of this region is called the boundary layer thickness and is generally denoted by δ. It can be seen in the fig.4.1 that the boundary layer thickness increased with the distance x from the body edge. The boundary layer thickness, δ, usually is defined as the distance from the surface to the point where the velocity is within 1% of the free shear velocity. It should be noted that the y-axis of the fig. 4.1 is exaggerated greatly to have a clear picture. 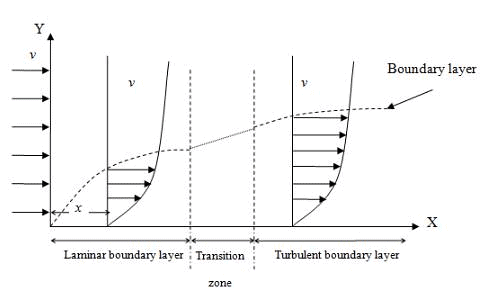 where, Rex is the local Reynold number at a distance x. The derivative of δ can be found in any stated boundary.The turbulent boundary layer thickness can be calculated using eq.4.2.

Figure 4.2 shows the velocity boundary layer for the turbulent and laminar zone. 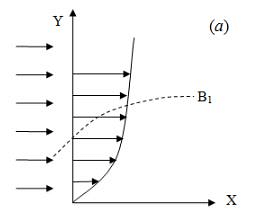 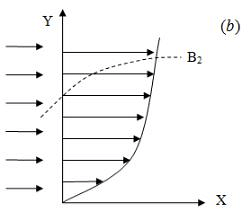 Fig.4.2: Boundary layer flow past a flat surface (a) turbulent, and (b) laminar 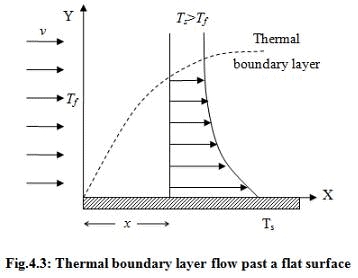 is called the momentum diffusivity and 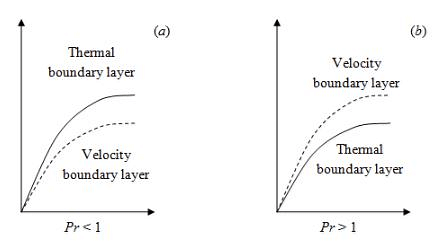 The above boundary layer theory will be helpful to understand the heat transfer in the process. Through the boundary layers heat transfer is covered in a separate chapter, but the detailed derivation and development of all the relationships having engineering importance for the prediction of forced convection heat transfer coefficient is beyond the scope of the course. The reader may consult any standard fluid mechanics and heat transfer books for detailed knowledge.

The purpose of this chapter is to present a collection of the most useful of the existing relations for the most frequently encountered cases of forced convection. Some of these relations will be having theoretical bases, and some will be empirical dimensionless correlations of experimental data. In some situations, more than one relation will be given.