4.4.1 Reynolds analogyReynolds has taken the following assumptions to find the analogy between heat and momentum transport.

1. Gradients of the dimensionless parameters at the wall are equal.2. The diffusivity terms are equal. That is 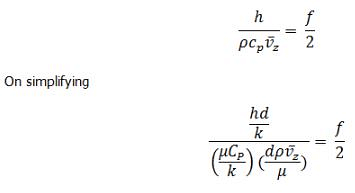 The advantage of the analogy lies in that the h may not be available for certain geometries/situations however, for which f value may be available as it is easier to perform momentum transport experiments and then to calculate the f. Thus by using the eq.4.34 the h may be found out without involving into the exhaustive and difficult heat transfer experiments.

It can be noted that for unit Prandtl number the Chilton-Colburn analogy becomes Reynolds analogy.

4.4.3 The Pradntl analogyIn the turbulent core the transport is mainly by eddies and near the wall, that is laminar sub-layer, the transport is by molecular diffusion. Therefore, Prandtl modified the above two analogies using universal velocity profile while driving the analogy (eq. 4.36).

Though Prandtl considered the laminar and turbulent laminar sublayers but did not consider the buffer zone. Thus, Van Karman included the buffer zone into the Prandtl analogy to further improve the analogy.