In the above reactions, the first and third are exothermic reactions but the second reaction is endothermic. The reactions are carried out in vapour phase.Catalyst: Silver or zinc oxide catalysts on wire gauge are used.Operating temperature and pressure: Near about atmospheric pressure and 500 – 600 oC 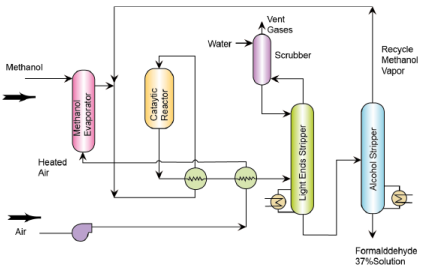 2. Explain Why light end stripper is used after absorber?

Ans: Water + HCHO + Formaldehyde solution may absorb other light end compounds which are not desired for absorption.  This is due to the basic feature of multicomponent absorption where absorption factors for various absorbing components is not biased sharply and other undesired components also get absorbed.  Therefore, the light end stripper would take care of removing these unwanted components by gently heating the same.

3. Suggest why pure formaldehyde is not produced in the process?

Ans: Pure formaldehyde is not stable and tends to produce a trimer or polymer.  Formaldehyde is stable in only water and therefore, 37% formaldehyde solution with 3 – 15 % methanol (stabilizer) is produced as formalin and sold.

4. What type of process design is expected for the air preheater? 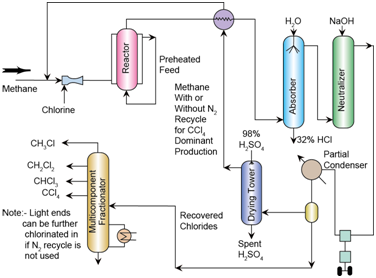 1. Why compressor is used before partial condenser?

2. Why water is removed using the dryer?

Ans: Water enters the vapour system due in the absorption column where solvent loss to the vapour will be a common feature. Water molecule can react with the highly active intermediate chloromethanes to form oxychlorides, which are highly undesired.

3. Will there be any difficulty in separation by increasing boiling points of the chloromethanes in the distillation sequences?

Ans: Definitely yes.  This is because the relative volatility of compounds atleast slightly increases with reducing pressure and viceversa.  But due to cooling water criteria in the distillation sequences also, there is no other way economical than doing distillation at higher pressure.

4. Since the boiling point of CH3Cl and CH2Cl2 are very close, what do you expect for the production of CH3Cl from the first column?

Ans: It is indeed difficult to separate CH3Cl and CH2Cl2 and therefore, good number of separation trays be used.  Or structured packing be used to reduce the height of the first column.

5. When the reactions are highly exothermic, why is the feed pre-heated?

Ans: Irrespective of the reactions being exothermic or endothermic, the reaction rate always increases with temperature for non-equilibrium reactions.  Therefore, feed is pre-heated to the desired temperature so as to fastly convert the reactants to products.