After studying this unit, you would be able to understand

• Meaning of contract of sale.

• Distinctions of sale from other similar contracts.

• Formalities of contract of sale.

• Subject matter of contract of sale.

• Ascertainment of price for the contract of sale.

Sale of goods is one of the specific forms of contracts recognized and regulated by law in India. Sale is a typical bargain between the buyer and the seller. The Sale of Goods Act, 1930 allows the parties to modify the provisions of the law by express stipulations. However, in some places this freedom is severely restricted.

Sale of Goods Act, 1930 is the Act to define and amend the law relating to the sale of goods. It extends to the whole of India except the State of Jammu and Kashmir. It came into force on 1st July, 1930.

The Sale of Goods Act, 1930 defines the terms which have been frequently used in the Act, which are as follows-

“Goods” me ans every kind of movable property other than actionable claims and money; and includes stock and shares, growing crops, grass, and things attached to or forming part of the land, which are agreed to be severed before sale or under the contract of sale. [Section 2(7)].

This is a wider definition than contained in the English law, which does not consider ‘stock’ and ‘shares’ as goods, though it includes a ship.

‘Actionable claims’ are claims, which can be enforced only by an action or suit, e.g., debt. A debt is not a movable property or goods. Even the Fixed Deposit Receipts (FDR) are considered as goods under Section 176 of the Indian Contract Act read with Section 2(7) of the Sales of Goods Act. 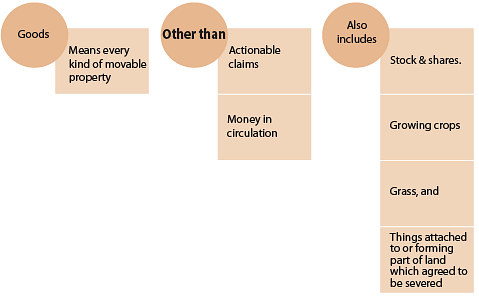 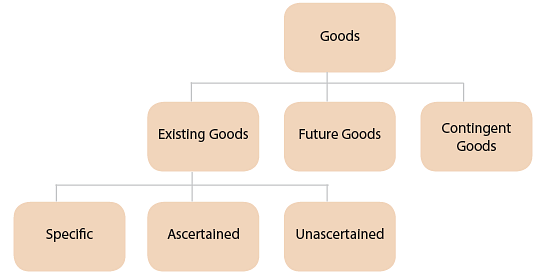 The existing goods may be of following kinds:

(a) Specific goods means goods identified and agreed upon at the time a contract of sale is made [Section 2(14)].Example 1: Any specified and finally decided goods like a Samsung Galaxy S7 Edge, Whirlpool washing machine of 7 kg etc.

Example 2: ‘A’ had five cars of different models.  He agreed to sell his ‘fiat’ car to ‘B’ and ‘B’ agreed to purchase the same car. In this case, the sale is for Specific goods as the car has been identified and agreed at the time of the contract of sale.

(b) Ascertained Goods are those goods which are identified in accordance with the agreement after the contract of sale is made. This term is not defined in the Act but has been judicially interpreted. In actual practice the term ‘ascertained goods’ is used in the same sense as ‘Specific goods.’ When from a lot or out of large quantity of unascertained goods, the number or quantity contracted for is identified, such identified goods are called ascertained goods.

(c) Unascertained goods are the goods which are not Specifically identified or ascertained at the time of making of the contract. They are indicated or defined only by description or sample.

Example: If A agrees to sell to B one packet of salt out of the lot of one hundred packets lying in his shop, it is a sale of unascertained goods because it is not known which packet is to be delivered. As soon as a particular packet is separated from the lot, it becomes ascertained or Specific goods.

(ii) FUTURE GOODS means goods to be manufactured or produced or acquired by the seller after making the contract of sale [Section 2 (6)]. A contract for the sale of future goods is always an agreement to sell. It is never actual sale because a man cannot transfer what is not in existence.

Example 1: 1,000 quintals of potatoes to be grown on A’s field, is not illegal, though the actual sale of future goods is not possible. This is an example of agreement to sell.

Example 2: P agrees to sell to Q all the milk that his cow may yield during the coming year. This is a contract for the sale of future goods.

Example 3: T agrees to sell to S all the oranges which will be produced in his garden this year. It is contract of sale of future goods, amounting to ‘an agreement to sell.’

Example: A agrees to sell to B a Picasso painting provided he is able to purchase it from its present owner. This is a contract for the sale of contingent goods.

(C) Delivery: its forms and derivatives: Delivery means voluntary transfer of possession from one person to another [Section 2(2)]. As a general rule, delivery of goods may be made by doing anything, which has the effect of putting the goods in the possession of the buyer, or any person authorized to hold them on his behalf.

(i) Actual delivery: When the goods are physically delivered to the buyer.

(ii) Constructive delivery: When it is effected without any change in the custody or actual possession of the thing as in the case of delivery by attornment (acknowledgement) e.g., where a warehouseman holding the goods of A agrees to hold them on behalf of B, at A’s request.

(iii) Symbolic delivery: When there is a delivery of a thing in token of a transfer of something else, i.e., delivery of goods in the course of transit may be made by handing over documents of title to goods, like bill of lading or railway receipt or delivery orders or the key of a warehouse containing the goods is handed over to buyer.

Goods are said to be in a deliverable state when they are in such a condition that the buyer would, under the contract, be bound to take delivery of them [Section 2(3)].

For example, when A contracts to sell timber and make bundles thereof, the goods will be in a deliverable state after A has put the goods in such a condition.

(D) “Document of title to goods” includes bill of lading, dock-warrant, warehouse keeper’s certificate, wharfingers’ certificate, railway receipt, multimodal transport document, warrant or order for the delivery of goods and any other document used in the ordinary course of business as proof of the possession or control of goods or authorizing or purporting to authorize, either by endorsement or by delivery, the possessor of the document to transfer or receive goods thereby represented. [Section 2(4)].

Examples: Bill of lading, dock warrant, warehouse keeper’s certificate, wharfinger’s certificate, railway receipt, warrant, an order of delivery of goods. The list is only illustrative and not exhaustive. Any other document which has the above characteristics also will fall under the same category. Though a bill of lading is a document of title, a mate’s receipt is not; it is regarded at law as merely an acknowledgement for the receipt of goods. A document amounts to a document of title only where it shows an unconditional undertaking to deliver the goods to the holder of the document.

However, there is a difference between a ‘document showing title’ and ‘document of title’. A share certificate is a ‘document’ showing title but not a document of title. It merely shows that the person named in the share certificate is entitled to the share represented by it, but it does not allow that person to transfer the share mentioned therein by mere endorsement on the back of the certificate and the delivery of the certificate.(E) Mercantile Agent [Section 2(9)]: It means an agent having in the customary course of business as such agent authority either to sell goods or to consign goods for the purpose of sale or to buy goods or to raise money on the security of the goods.

Examples of such kind of agents are auctioneers, factors, brokers, etc.

Example: If A who owns certain goods pledges them to B, A has general property in the goods, whereas B has special property or interest in the goods to the extent of the amount of advance he has made.

(G) Insolvent [Section 2(8)]: A person is said to be insolvent when he ceases to pay his debts in the ordinary course of business, or cannot pay his debts as they become due, whether he has committed an act of insolvency or not.

(H) Price [Section 2(10)]: Price means the money consideration for a sale of goods. (I) Quality of goods includes their state or condition. [Section 2(12)].

SALE AND AGREEMENT TO SELL (SECTION 4)

A contract of sale may be absolute or conditional. [Section 4(2)].

An agreement to sell becomes a sale when the time elapses or the conditions are fulfilled subject to which the property in the goods is to be transferred. [Section 4(4)].

A contract for the sale of goods may be either sale or agreement to sell. 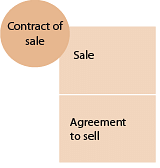 Agreement to Sell: In an agreement to sell, the ownership of the goods is not transferred immediately. It is intending to transfer at a future date upon the completion of certain conditions thereon. The term is defined in Section 4(3) of the Sale of Goods Act, 1930, as- “where the transfer of the property in the goods is to take place at a future time or subject to some condition thereafter to be fulfilled, the contract is called an agreement to sell.”

Thus, whether a contract of sale of goods is an absolute sale or an agreement to sell, depends on the fact whether it contemplates immediate transfer from the seller to the buyer or the transfer is to take place at a future date.

The following elements must co-exist so as to constitute a contract of sale of goods under the Sale of Goods Act, 1930:

(i) There must be at least two parties, the seller and the buyer.

(ii) The subject matter of the contract must necessarily be goods covering only movable property. It may be either existing goods, owned or possessed by the seller or future goods.

(iii) A price in money (not in kind) should be paid or promised. But there is nothing to prevent the consideration from being partly in money and partly in kind.

(iv) A transfer of property in goods from seller to the buyer must take place. The contract of sale is made by an offer to buy or sell goods for a price by one party and the acceptance of such offer by other.

(v) A contract of sale may be absolute or conditional.

(vi) All other essential elements of a valid contract must be present in the contract of sale, e.g. competency of parties, legality of object and consideration etc.