The document Fourier Transform - Mathematical Methods of Physics, UGC - NET Physics Physics Notes | EduRev is a part of the Physics Course Physics for IIT JAM, UGC - NET, CSIR NET.
All you need of Physics at this link: Physics

. Replace the discreteAn with the continuous  F(k) dk while letting n/L → k

. Then change the sum to an integral, and the equations become

is called the forward (-i) Fourier transform, and

is called the inverse (+i) Fourier transform. The notation

instead of the oscillation frequency v. However, this destroys the symmetry, resulting in the transform pair

To restore the symmetry of the transforms, the convention

In general, the Fourier transform pair may be defined using two arbitrary constants a and b as

The Fourier transform F(k) of a function f(x) is implemented the Wolfram Language as FourierTransform[f, x, k], and different choices of a and b can be used by passing the optional FourierParameters-> {a, b} option. By default, the Wolfram Language takes FourierParameters as (0,1). Unfortunately, a number of other conventions are in widespread use. For example, (0,1) is used in modern physics, (1,-1) is used in pure mathematics and systems engineering, (1,1) is used in probability theory for the computation of the characteristic function, (-1,1) is used in classical physics, and (0, -2π) is used in signal processing. In this work, following Bracewell (1999, pp. 6-7), it is always assumed that a = 0 and b = -2π unless otherwise stated. This choice often results in greatly simplified transforms of common functions such as 1,

Since any function can be split up into even and odd portions E(x) and O(x),

2. There are a finite number of discontinuities.

3. The function has bounded variation. A sufficient weaker condition is fulfillment of the Lipschitz condition

(Ramirez 1985, p. 29). The smoother a function (i.e., the larger the number of continuous derivatives), the more compact its Fourier transform.

The Fourier transform is also symmetric since

The first of these is derived as follows:

There is also a somewhat surprising and extremely important relationship between the autocorrelation and the Fourier transform known as the Wiener-Khinchin theorem. Let

denote the complex conjugate of f, then the Fourier transform of the absolute square of F(k) is given by

Now use integration by parts

The first term consists of an oscillating function times f(x). But if the function is bounded so that

(as any physically significant signal must be), then the term vanishes, leaving

This process can be iterated for the nth derivative to yield

Since the derivative of the Fourier transform is given by

The variance of a Fourier transform is

and it is true that

If f(x) has the Fourier transform

, then the Fourier transform has the shift property

If f(x) has a Fourier transform

, then the Fourier transform obeys a similarity theorem.

so f(a x) has the Fourier transform

The "equivalent width" of a Fourier transform is

The "autocorrelation width" is

where f * g denotes the cross-correlation of f and

is the complex conjugate.

Any operation on f(x) which leaves its area unchanged leaves F(0) unchanged, since 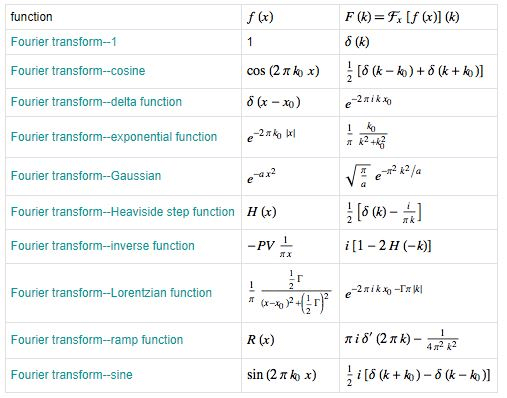 Similarly, the n-dimensional Fourier transform can be defined for