Frequency Response AnalysisWhen a linear system is subjected to sinusoidal input perturbation, its ultimate response after a long time also becomes a sinusoidal wave, however with different amplitude and a phase shift. This characteristic constitutes the basis of frequency response analysis. One needs to study how the amplitude and phase shift change with the frequency of the input perturbation.

Response of a First-Order System to a Sinusoidal Input Consider a simple first order process,

Let the sinusoidal input u(t) = A sin ωt perturb the system. Then the output of the process will be

Computing the constants C1,C2and C3 and taking inverse Laplace Transform of the above equation we obtain,

, the first term disappears as

Hence we observe that

•  Amplitude Ratio between the output wave and input wave is 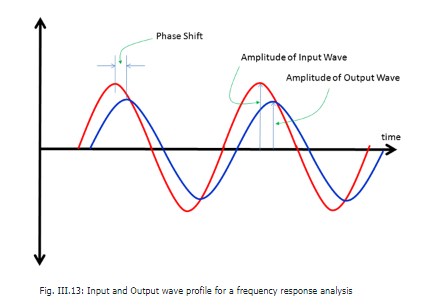 The modulus (or absolute value or magnitude) of W is

and the argument (or phase angle) is

in the transfer function of the first order process as

is now a complex number, the modulus and argument can be calculated as,

The last two relationships indicate the amplitude ratio and phase lag for the ultimate response of the first order process. Hence the observations in the last subsection can also be stated in the light of the above results as follows:

•  Amplitude Ratio between the output wave and input wave is

Example of frequency response of a second order systemThe process is