where vi is the spot speed of ith vehicle, and n is the number of observations. In many speed studies, speeds are represented in the form of frequency table. Then the time mean speed is given by,

The space mean speed also averages the spot speed, but spatial weightage is given instead of temporal. This is derived as below. Consider unit length of a road, and let vi is the spot speed

of i th vehicle. Let ti is the time the vehicle takes to complete unit distance and is given by

. If there are n such vehicles, then the average travel time ts is given by,

If tav is the average travel time, then average speed vs =

. Therefore, from the above equation,

The results of a speed study is given in the form of a frequency distribution table. Find the time mean speed and space mean speed. 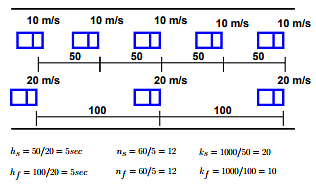 and their summations given in the last row. Time mean speed can be computed as,

Similarly, space mean speed can be computed as,

In order to understand the concept of time mean speed and space mean speed, following illustration will help. Let there be a road stretch having two sets of vehicle as in figure 2:1. The first vehicle is traveling at 10m/s with 50 m spacing, and the second set at 20m/s with 100 m spacing. Therefore, the headway of the slow vehicle hs will be 50 m divided by 10 m/s which is 5 sec. Therefore, the number of slow moving vehicles observed at A in one hour ns will be 60/5 = 12 vehicles. The density K is the number of vehicles in 1 km, and is the inverse of spacing. Therefore, Ks = 1000/50 = 20 vehicles/km. Therefore, by definition, time mean speed vt is given by

Similarly, by definition, space mean speed is the mean of vehicle speeds over time. Therefore,

This is same as the harmonic mean of spot speeds obtained at location A; ie

where,qi is the frequency of the vehicle having vi speed.

Therefore for any sub-stream qi , the following relationship will be valid.

The summation of all sub-stream flows will give the total flow q:

Similarly the summation of all sub-stream density will give the total density k.

Substituting 2.9, vt can be written as,

By adding and subtracting vs and doing algebraic manipulations, vt can be written as,

The third term of the equation will be zero because Σfi(vi − vs) will be zero, since vs is the mean speed of vi . The numerator of the second term gives the standard deviation of vi . Σfi by definition is 1.Therefore,

Numerical Example For the data given below,compute the time mean speed and space mean speed. Also verify the relationship between them. Finally compute the density of the stream 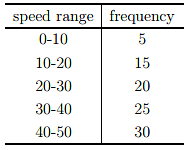 , verifying their relation by the equation

and using this to compute the density. To verify their relation, the standard deviation also need to be computed

For convenience,the calculation can be done in a tabular form as shown in table 2.5.1.

The time mean speed(vt) is computed as:

The space mean speed can be computed as:

The standard deviation can be computed as:

The time mean speed can also vt can also be computed as:

The density can be found as:

The relationship between the fundamental variables of traffic flow, namely speed, volume, and density is called the fundamental relations of traffic flow. This can be derived by a simple concept. Let there be a road with length v km, and assume all the vehicles are moving with v km/hr.(Fig 2:2). Let the number of vehicles counted by an observer at A for one hour be n1. By definition, the number of vehicles counted in one hour is flow(q). Therefore,

Figure 2:2: Illustration of relation between fundamental parameters of traffic flow

This is the fundamental equation of traffic flow. Please note that, v in the above equation refers to the space mean speed will also be same

The relation between flow and density, density and speed, speed and flow, can be represented with the help of some curves. They are referred to as the fundamental diagrams of traffic flow. They will be explained in detail one by one below.

The flow and density varies with time and location. The relation between the density and the corresponding flow on a given stretch of road is referred to as one of the fundamental diagram of traffic flow. Some characteristics of an ideal flow-density relationship is listed below:

1. When the density is zero, flow will also be zero,since there is no vehicles on the road.

2. When the number of vehicles gradually increases the density as well as flow increases.

4. There will be some density between zero density and jam density, when the flow is maximum. The relationship is normally represented by a parabolic curve as shown in figure 2:3 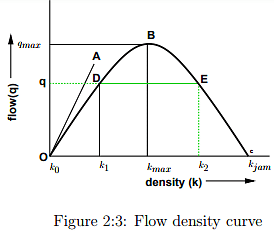 Similar to the flow-density relationship, speed will be maximum, referred to as the free flow speed, and when the density is maximum, the speed will be zero. The most simple assumption is that this variation of speed with density is linear as shown by the solid line in figure 2:4. Corresponding to the zero density, vehicles will be flowing with their desire speed, or free flow speed. When the density is jam density, the speed of the vehicles becomes zero. It is also possible to have non-linear relationships as shown by the dotted lines. These will be discussed later.

The relationship between the speed and flow can be postulated as follows. The flow is zero either because there is no vehicles or there are too many vehicles so that they cannot move. At maximum flow, the speed will be in between zero and free flow speed. This relationship is shown in figure 2:5. The maximum flow qmax occurs at speed u. It is possible to have two 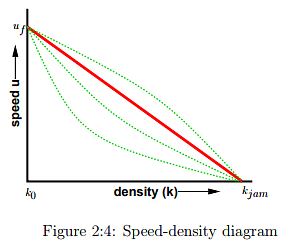 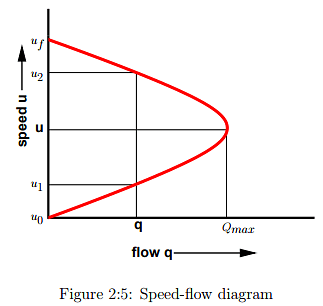 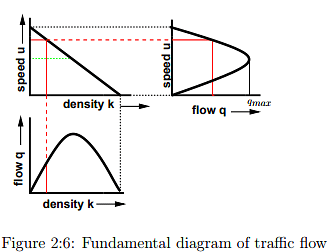 different speeds for a given flow.

The diagrams shown in the relationship between speed-flow, speed-density, and flow-density are called the fundamental diagrams of traffic flow. These are as shown in figure 2:6. One could observe the inter-relationship of these diagrams.